Hummels own goal sinks Germany against France in Euro 2020 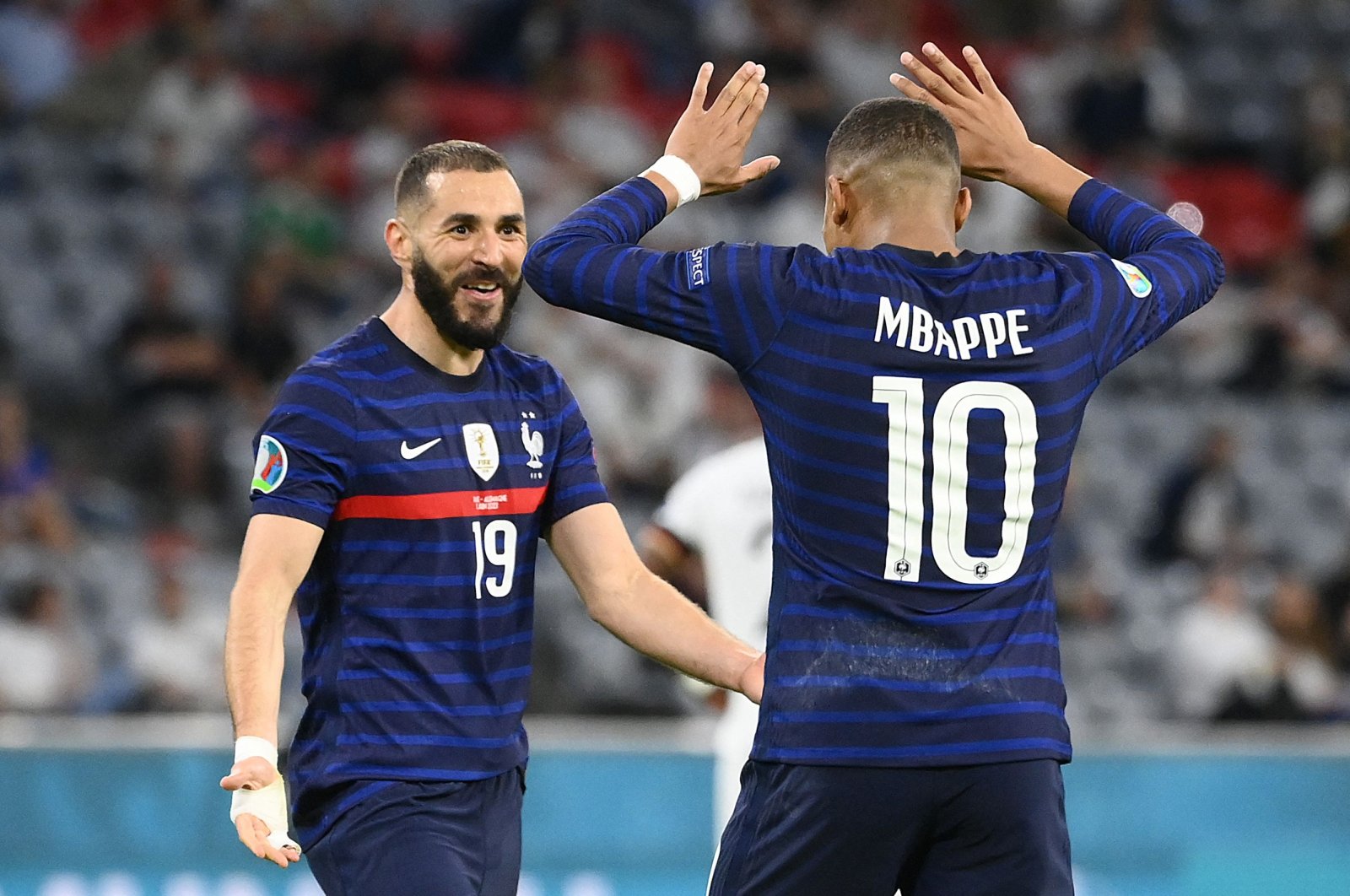 France's forward Karim Benzema (L) celebrates with France's forward Kylian Mbappe after scoring, before it was later revoked due to offside, during the UEFA EURO 2020 Group F football match between France and Germany at the Allianz Arena in Munich on June 15, 2021. (AFP Photo)
by French Press Agency - AFP Jun 15, 2021 11:52 pm
RECOMMENDED

An own goal by Mats Hummels was enough to give France a 1-0 victory over Germany in its opening Euro 2020 Group F match on Tuesday as the sluggish-looking hosts lost their opening fixture at the European Championship for the first time.

Hummels turned the ball into his own net in the 20th minute, which ultimately decided the contest.

"It was a clash that could have been a semifinal or a final, so to take three points was important," said France coach Didier Deschamps.

"We played a big game against a very good German team, but we were up to the level and this victory does us good."

The result leaves France second on goal difference in the early Group F table behind Portugal, after the holders' 3-0 win over Hungary earlier in Budapest.

The home defeat piles the pressure on Germany ahead of its next game against Cristiano Ronaldo's Portugal on Saturday, also at the Allianz Arena.

"We fought until the end and I can't blame the team, we gave it everything we had.

"What was missing was a bit of penetrating power in the final third. We didn't do enough there."

Low, who will stand down after the European Championship, is desperate to avoid a repeat of the 2018 World Cup when Die Mannschaft suffered the humiliation of finishing bottom of their group.

It was a heartbreaking night for Hummels, back to boost the German defense after a two-year exile from international football.

Seven years ago, it was Hummels' headed goal that knocked France out of the 2014 World Cup in the quarterfinals as Germany went on to win the title in Brazil.

The opening 15 minutes on Tuesday were spent with the European heavyweights tentatively probing each other's defense until the French started to exert pressure and landed a sucker punch.

France's Bayern Munich defender Lucas Hernandez met Paul Pogba's magnificent pass with a low cross from the left flank which Hummels, to his horror, turned into his own net.

There was plenty of first-half niggle.

Germany defender Antonio Ruediger appeared to attempt to bite the back of France midfielder Pogba, who he was tightly marking.

Joshua Kimmich was booked in only the seventh minute for a late tackle on his Bayern teammate Hernandez.

France made a strong start to the second half as Rabiot hit the post, but then Germany started to threaten the French goal, with Serge Gnabry firing over.

The hosts had a let-off when Mbappe hit the net after cutting inside and curling in a superb shot on 66 minutes, but the goal was ruled out.

In the final 10 minutes, Mbappe was furious to be denied a penalty when a Hummels tackle from behind just pushed the ball out of harm's way before the France forward crashed to the turf.

In his first competitive international since France's defeat by Germany at the 2014 World Cup, Benzema looked to have sealed the win when he tapped in Mbappe's pass in the dying stages, but VAR caught the Paris Saint-Germain star offside again.