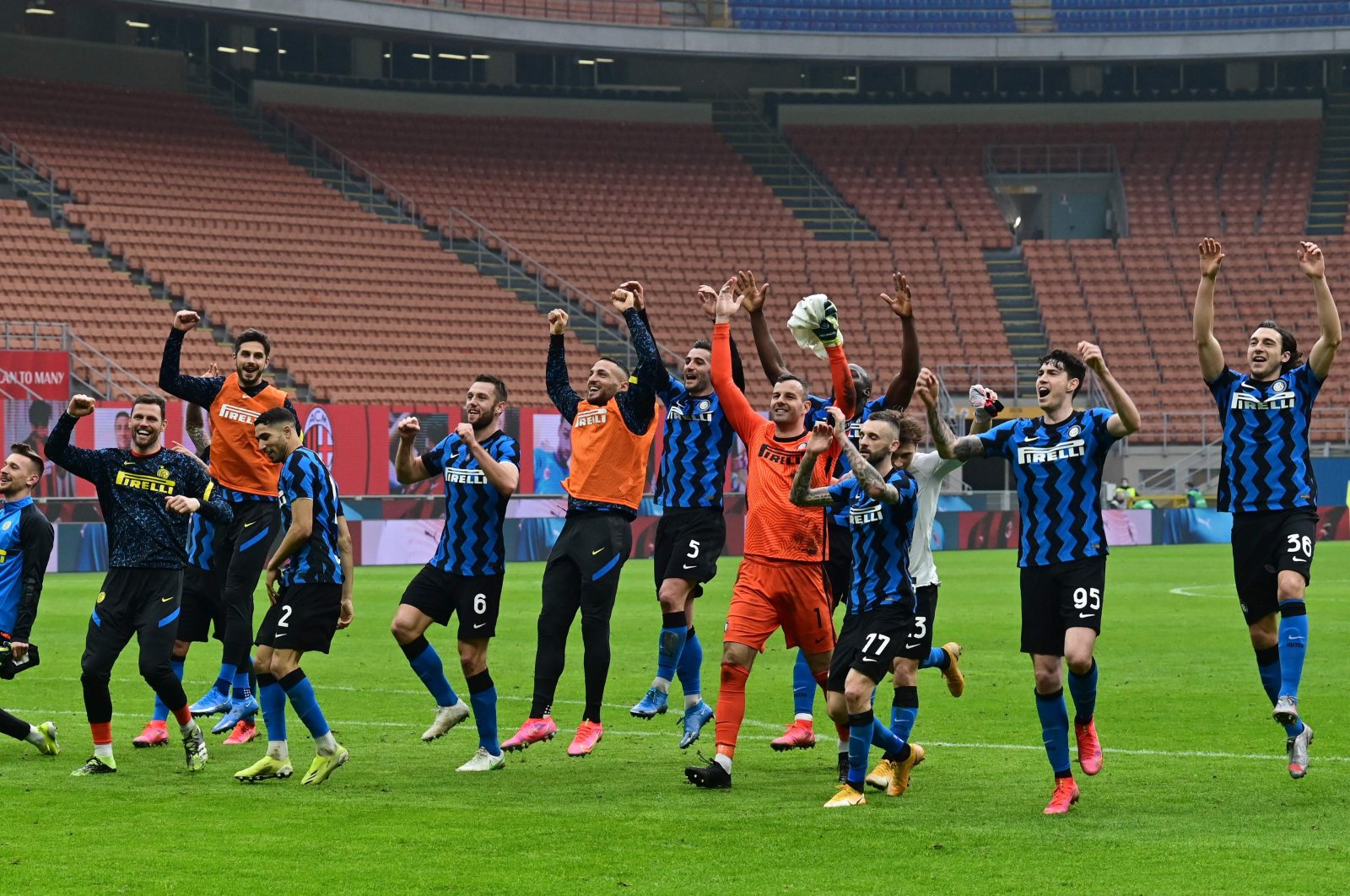 Inter opened up a four-point lead over their second-placed opponents as Antonio Conte's side target a first league title since their unprecedented treble under Jose Mourinho in 2010.

Inter Milan beat city rivals AC Milan 3-0 to extend their lead at the top of Serie A on Sunday as Lautaro Martinez scored a double, with Romelu Lukaku also on target.

Inter opened up a four-point lead over their second-placed opponents as Antonio Conte's side target a first league title since their unprecedented treble under Jose Mourinho in 2010.

Romelu Lukaku was on top form, the Belgian playing a role in Martinez's two goals on five and 57 minutes before scoring his 17th goal in the league this season to move top of the Serie A scorers' chart.

Inter Milan increased their points to 53 to remain atop of the Serie A standings. AC Milan are currently in second place with 49 points.

Milan, chasing a first Scudetto since 2011, fell to back-to-back Serie A losses for the first time this season, with their title push suffering another blow with a fourth defeat in eight league games.

"Two eliminations in the Italian Cup and the Champions League, this is the only goal we have left and we're fighting for that."

The match was played behind closed doors at the San Siro because of the coronavirus pandemic, but that did not stop thousands of fans gathering outside the stadium for the final Milan derby of the season.

It was the third derby of the season, with Milan winning the first 2-1 in the league.

Inter won a fiery Italian Cup quarter-final by the same scoreline, a game overshadowed by Zlatan Ibrahimovic and Lukaku squaring off and trading insults, with the Swede later sent off.

The supporters waited for the team buses to arrive, waving flags and singing, dispersing once the teams had entered the stadium grounds.

The game was also preceded by a minute's silence and applause for former Inter defender Mauro Bellugi who died aged 71 years on Saturday, months after having both his legs amputated because of coronavirus.

Inter were fresher having been eliminated early from European action, with Milan coming off a 2-2 Europa League midweek draw at Red Star Belgrade.

And Conte's side came out firing with Lukaku powering down the right flank.

Milan defender Simon Kjaer blocked his initial cross, but the ball returned to the Belgian for a perfect delivery for Martinez to nod home.

Ibrahimovic threated with a back-heel flick after quarter of an hour following a scramble in the box but Inter keeper Samir Handanovic kept it out.

Milan Skriniar headed wide before the break from a Christian Eriksen free-kick.

Gianluigi Donnarumma got his hand to the ball to deny Ivan Perisic, with Handanovic pulling off a double save from Ibrahimovic after the break.

But Martinez broke through again, finishing off a Perisic pull-back from the by-line in a move started by Lukaku and Achraf Hakimi.

Donnarumma denied Lukaku minutes later but the former Manchester United striker then burst through to score the third, becoming the first Inter player to score in four straight Serie A derbies since Benito Lorenzi in 1950.

Ibrahimovic asked to be substituted with a quarter of an hour to go complaining of calf cramps.

"A striker depends on the team's performance," said Pioli.

"In the first half we could have done more. In the second half we had many scoring chances, but Handanovic hasn't saved so well for a long time."

"If we had been told months ago that we would now be second, everyone would have jumped for joy, but this would not be us.

"We didn't do our best in the last three games and we know we can do something more.

"It was a tough week, the worst one of the season."

Inter next host 11th-placed Genoa with Milan traveling to Roma, with the capital side third before they play Benevento later on Sunday.