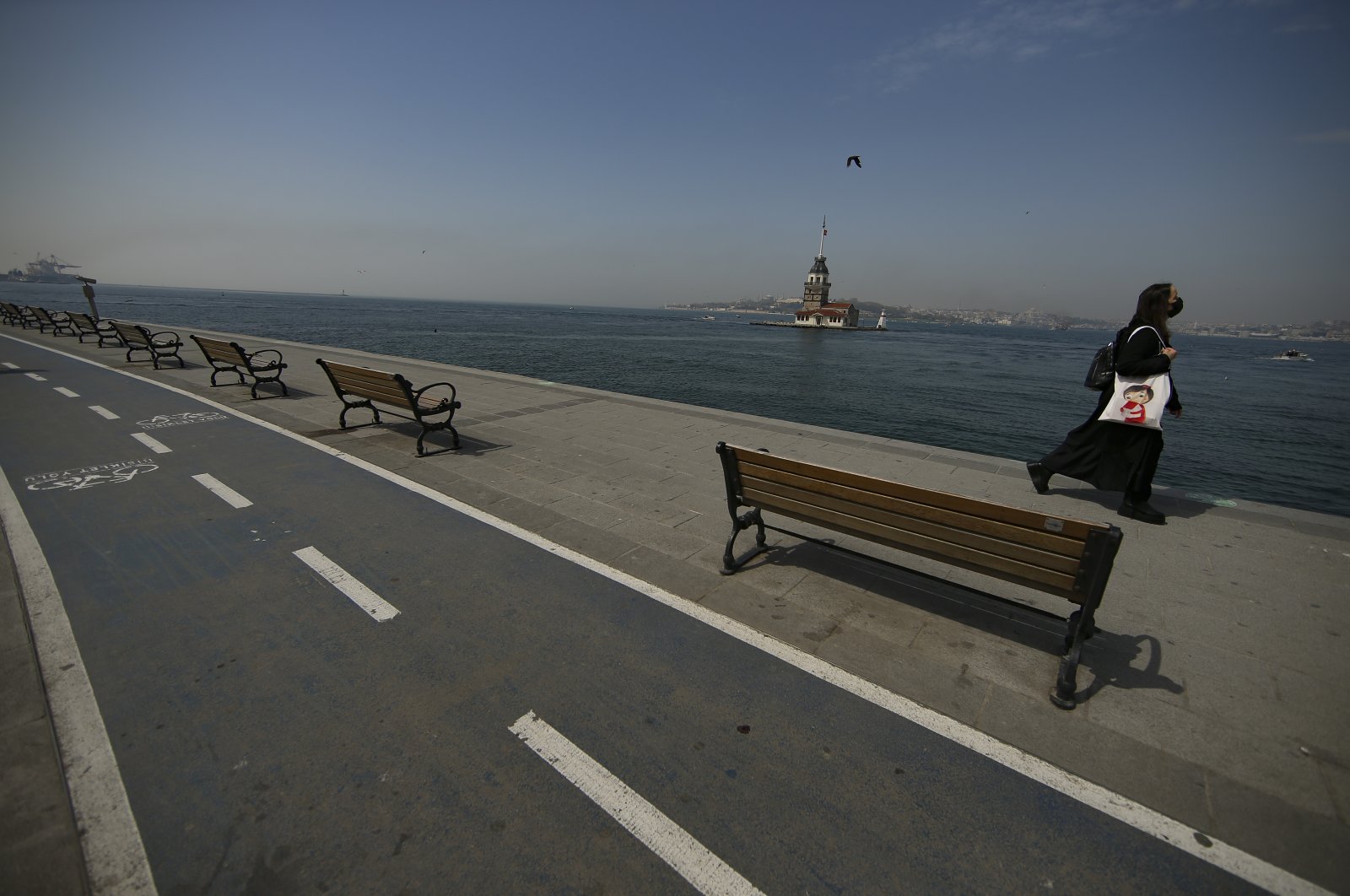 Backdropped by the Maiden's Tower a woman walks on a nearly deserted promenade by the Bosphorus Strait in Istanbul, Friday, April 30, 2021, on the first day of a tight lockdown to help protect from the spread of the coronavirus. (AP Photo)
by DAILY SABAH WITH AGENCIES May 06, 2021 2:19 pm
RECOMMENDED

Istanbul, Turkey's biggest metropolis will be ready to host this year's Champions League final between English sides Chelsea and Manchester City, as a successful coronavirus lockdown has brought down COVID-19 numbers significantly.

Thousands of English fans, in the meantime, will be hoping that a ban on international travel ends in time for them to get to Turkey in three weeks to see Chelsea and Manchester City contest the Champions League final without facing restrictions.

In a further easing of coronavirus laws in England, the government is set to allow overseas travel again from May 17 but it's unclear which destinations will still require forms of quarantine on return.

High infection rates saw Turkey last week enter its first national lockdown. That is due to end on May 17, creating the possibility of that country not being on the green list to allow fans to return from the all-English Champions League final on May 29 without having to self-isolate at home for 10 days.

Up to 4,000 fans from both Chelsea and City could be allowed into the 76,000-seat Atatürk Olympic Stadium, which was originally due to host last season’s final.

The stadium hosted the 2005 Champions League final, which Liverpool won on penalties after drawing 3-3 with AC Milan.

Chelsea has a more recent memory of Istanbul than Manchester City. It faced Liverpool in the 2019 Super Cup to kick off the new season. The match between Champions League holder Liverpool and Europa League winner Chelsea finished extra time at 2-2. The Blues lost it 5-4 on penalties.

This will be the third time the Champions League final has involved a meeting of English clubs. Chelsea lost to Manchester United in 2008 at Moscow, which is a flight of more than four hours from England – a similar time to Istanbul. It was a shorter trip in 2019 when Atletico Madrid's stadium was the venue for Liverpool's victory over Tottenham.

Earlier on April 30, European football body UEFA told Agence France-Presse (AFP) that it had been assured that the lockdown "should not have any impact on the match," which will take place a "limited number of spectators."

UEFA added that it "will continue to work closely with the Turkish Football Federation (TFF) and the local and national authorities to stage the match safely."

For much of April, Turkey reported a record number of cases, with the number of daily infections reaching a record high of 63,082 on April 16. But, with the strictest lockdown since the beginning of the pandemic, case numbers started to decline once again, reaching as low as 24,733 on May 3.

British fans planning to attend the match do not face any difficulties in terms of Turkish regulations. People from the U.K. will no longer be requested to show a negative COVID-19 test result on their arrival in Turkey from May 15.