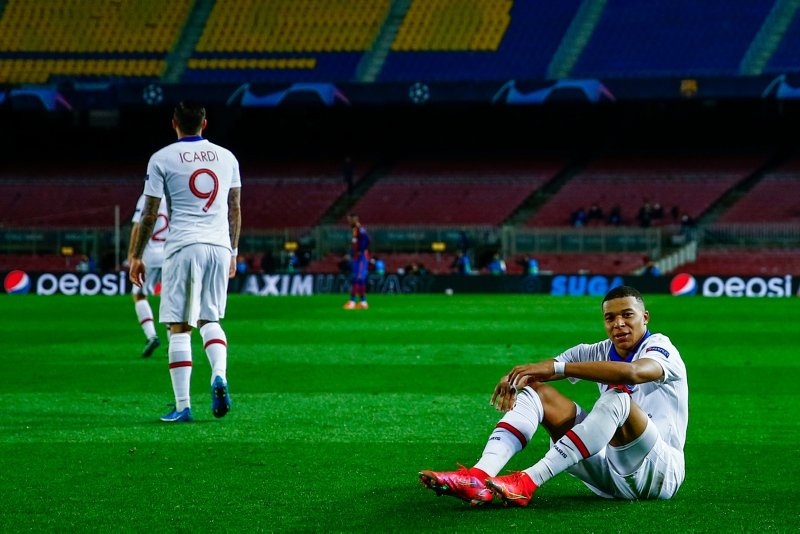 A sensational hat-trick from Kylian Mbappe helped Paris Saint-Germain hammer Barcelona 4-1 at the Camp Nou on Tuesday while Liverpool is also moving on to the Champions League quarterfinals having won 2-0 away at RB Leipzig.

With the decisive victory, PSG became the first French team to defeat Barcelona at its home pitch Nou Camp in 37 years, matching the last such winning margin. In a 1984 UEFA Cup Winners' Cup match, French side Metz defeated Barcelona 1 - 4 too.

The Liverpool-Leipzig match also marked a first, with Ozan Kabak becoming the first Turk to play for an English side in the Champions League.

The elite tournament resumed with the first knock-out ties of the last 16 in the continental competition played during the coronavirus pandemic.

Barca hosted PSG behind closed doors while Leipzig welcomed Liverpool to Budapest as Germany is currently not allowing non-citizens/residents to enter the country from the U.K.

Lionel Messi's penalty gave Barcelona the lead but Mbappe struck either side of half-time, Moise Kean added another and Mbappe completed his hat-trick with a superb finish as PSG took control of the tie, repeating the sensational encounter at this stage in 2017.

On that occasion, Barcelona overturned a 4-0 first leg deficit 6-1 at home and must now launch a similar comeback attempt, this time in Paris on March 10.

That is when six-time champions Liverpool, last winners in 2019, will expect to finish the job against Leipzig at Anfield. Second-half goals from Mohamed Salah and Sadio Mane earned them a deserved win in the duel between German bosses Juergen Klopp and Julian Nagelsmann in the Hungarian capital.

On Wednesday Porto meets Juventus and Sevilla host Borussia Dortmund while holders Bayern Munich resume away to Lazio next Tuesday.