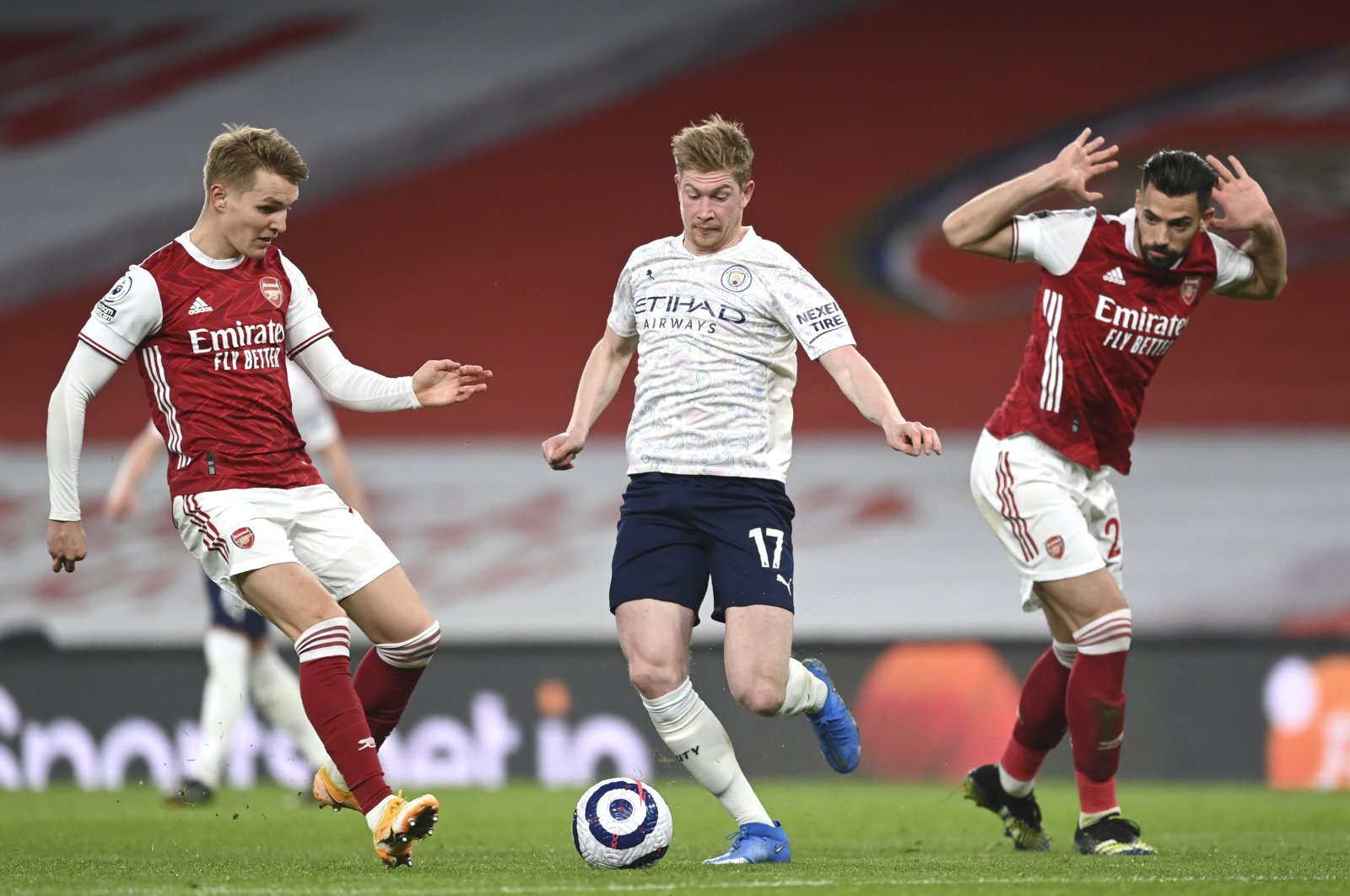 Manchester City remains 10 points clear at the top of the Premier League as Raheem Sterling's early header was enough to beat Arsenal 1-0 on Sunday.

Manchester United and Leicester are City's closest challengers as United saw off Newcastle 3-1 at Old Trafford and Leicester won 2-1 away to Aston Villa.

Arsenal remains in 10th with its best chance of a return to the Champions League next season dependent on success in the Europa League. Tottenham is just two points better off than its north London rivals in ninth, nine points off the top four after a fifth defeat in its last six league games.

Manchester United, in the meantime, opened up a six-point cushion over Chelsea as it deepened Newcastle's fears of being dragged into the bottom three.

Inter opened up a four-point lead over its second-placed opponents Milan as Conte's side target a first league title since its unprecedented treble under Jose Mourinho in 2010.

In third, Roma was held to a goalless draw at 15th-placed Benevento, giving Juventus, who is 11 points off top spot, the chance to move third against rock bottom Crotone on Monday.

Roma is five points adrift of Milan with both teams going head-to-head in Rome next weekend.

In Bergamo, Atalanta moved fourth at the expense of Napoli in a game where all six goals came in the second half. Napoli is now seventh, three points behind Atalanta who occupy the final Champions League place.

RB Leipzig swept past Hertha Berlin with a 3-0 away win Sunday to cut Bayern Munich's lead at the top of the Bundesliga table to just two points.

Hertha is 15th in the table, but only goal difference keeps it out of the relegation play-off place as it is level on 18 points with Arminia Bielefeld.

Earlier, host Augsburg was denied a first win over Bayer Leverkusen at the 20th attempt by a last-gasp equalizer from Burkina Faso defender Edmond Tapsoba as the visitors snatched a 1-1 draw.

After losing six of its nine league games since the start of the year, the result leaves Augsburg in 13th place.

Leverkusen remains fifth, five points behind third-placed Wolfsburg and fourth-placed Frankfurt in the race for the Champions League.

Barcelona compounded its Champions League misery at the hands of Paris Saint-Germain by drawing on Sunday at home to Cadiz, who scored an 89th-minute penalty to snatch a 1-1 draw at Camp Nou.

Atletico, who is now eight points ahead of the Catalans. Real Madrid is only three points behind Atleti but has played a game more.

Lyon had gone to the summit on goal difference with a 3-2 victory at Brest on Friday, but Lille responded to make it a club-record seven straight away wins in the top flight.