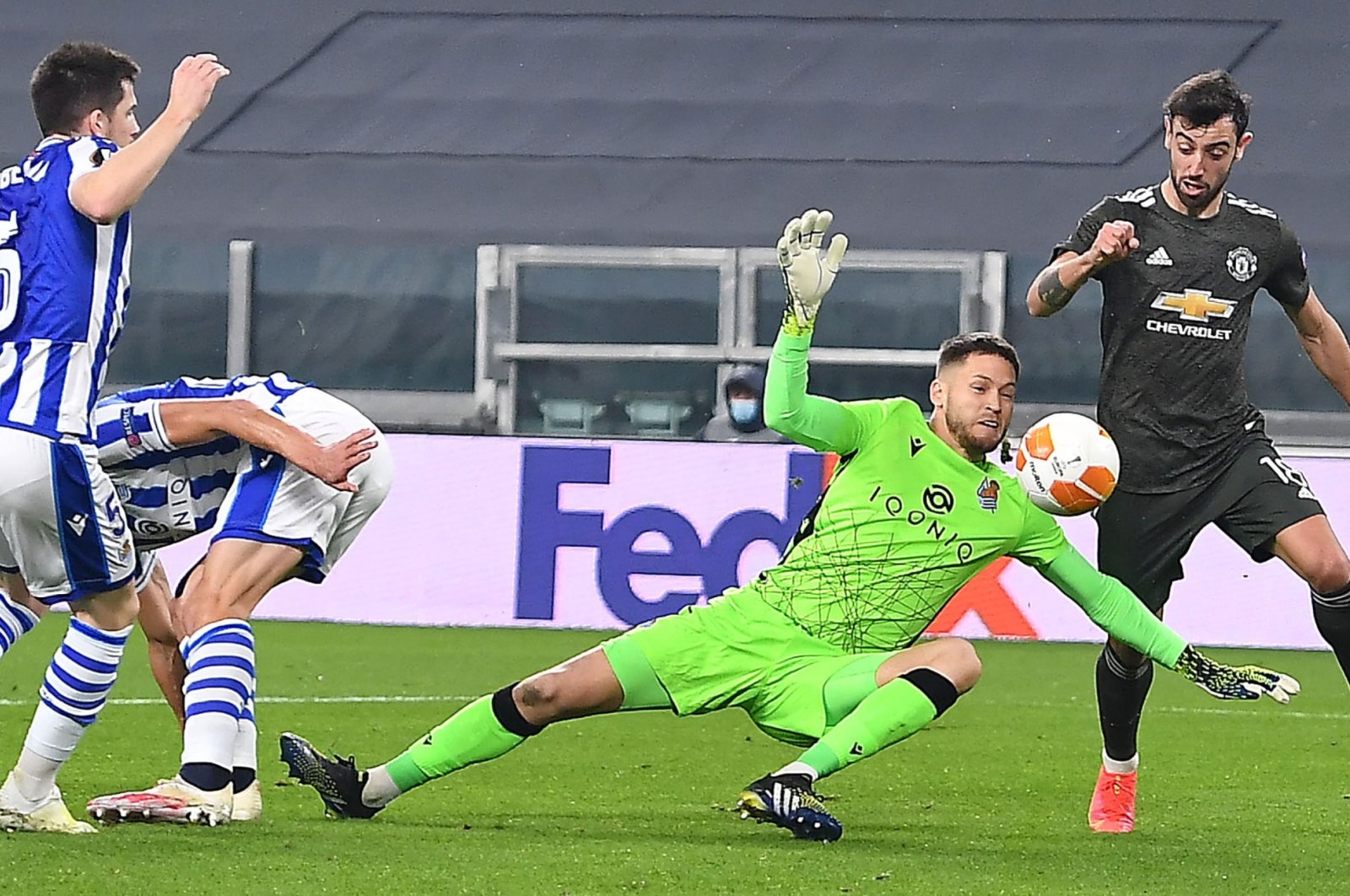 Manchester United’s Bruno Fernandes (R) on his way to scoring the opening goal against Real Sociedad in the UEFA Europa League round of 32 match at the Allianz Stadium, Turin, Italy, Feb. 18, 2021. (EPA Photo)
by REUTERS Feb 19, 2021 12:38 pm
RECOMMENDED

Manchester United and Tottenham Hotspur built hefty leads with emphatic away wins in their Europa League last 32 first-leg matches but AC Milan was held to a 2-2 draw at Red Star Belgrade as the competition resumed Thursday.

In a night of high-scoring matches, United crushed Real Sociedad 4-0 in a game played in Turin because of COVID-19 restrictions between the U.K. and Spain with Bruno Fernandes scoring a brace for his side.

Tottenham won 4-1 away against Austrian side Wolfsberg in the Puskas Arena in Budapest while Swiss side Young Boys, Scotland's Rangers and Olympiakos all hit four.

Arsenal drew 1-1 in the "away" leg of its tie against Benfica, although the match was played in Rome.

Fernandes has become the heartbeat of Manchester United and the Portuguese midfielder opened the scoring after 27 minutes with his 20th goal of the season.

He curled in his second after 57 minutes before Marcus Rashford and Daniel James completed the rout.

"We deserved to win but maybe not by four goals. On a night like this when we find spaces we can be a dangerous team," United manager Ole Gunnar Solskjaer said.

Tottenham's domestic form has been woeful but it claimed a first away win in the knockout phase of the Europa League since 2008 to put one foot in the last 16.

Gareth Bale set up Son Heung-min before scoring a classy second as he marked a rare start with a strong display before being substituted midway through the second half.

Lucas Moura made it 3-0 with a solo effort but Wolfsberg improved after the break and Michael Liendl pulled a goal back from the penalty spot. Tottenham substitute Carlos Vinicius touched home his side's late fourth.

"I think we have one foot in the next round. I liked the performance in the first half," Spurs manager Jose Mourinho said.

Arsenal fell behind against Benfica when Pizzi netted a penalty but Bukayo Saka leveled two minutes later and the Premier League side would have won had its finishing been better, Pierre-Emerick Aubameyang wasting several chances.

AC Milan was seconds away from victory in Belgrade but a stoppage-time header by substitute Milan Pavkov earned 10-man Red Star a 2-2 draw.

The Italians led 1-0 and 2-1 thanks to a Radovan Pankov own goal and a Theo Hernandez penalty but Red Star, who had Milan Rodic sent off in the 76th minute, hit back through a Guelor Kanga penalty.

Ajax secured a 2-1 win at Lille thanks to late goals by Dusan Tadic and Brian Brobbey after Timothy Weah had put the hosts in front.

There were goals galore elsewhere. Young Boys led Bayer Leverkusen 3-0 with goals by Christian Fassnacht, Jordan Siebatcheu and Meschack Elia but Leverkusen stormed back to level with Patrik Schick twice on target. Siebatcheu struck again in the 89th minute to give Young Boys a 4-3 win.

A rip-roaring contest in Antwerp saw Rangers take the lead, then trail 2-1 and 3-2 before Ryan Kent equalized in the 83rd minute and Borna Barisic converted his second penalty of the night in the 90th minute to seal a victory.

Molde and Hoffenheim shared six goals in a 3-3 draw while AS Roma eased to a 2-0 win at Braga with Edin Dzeko scoring early and Borja Mayoral striking late but fellow Italians Napoli suffered a 2-0 loss at Granada.

Leicester City was held to a 0-0 draw at Slavia Prague while Dynamo Kiev and Brugge drew 1-1.