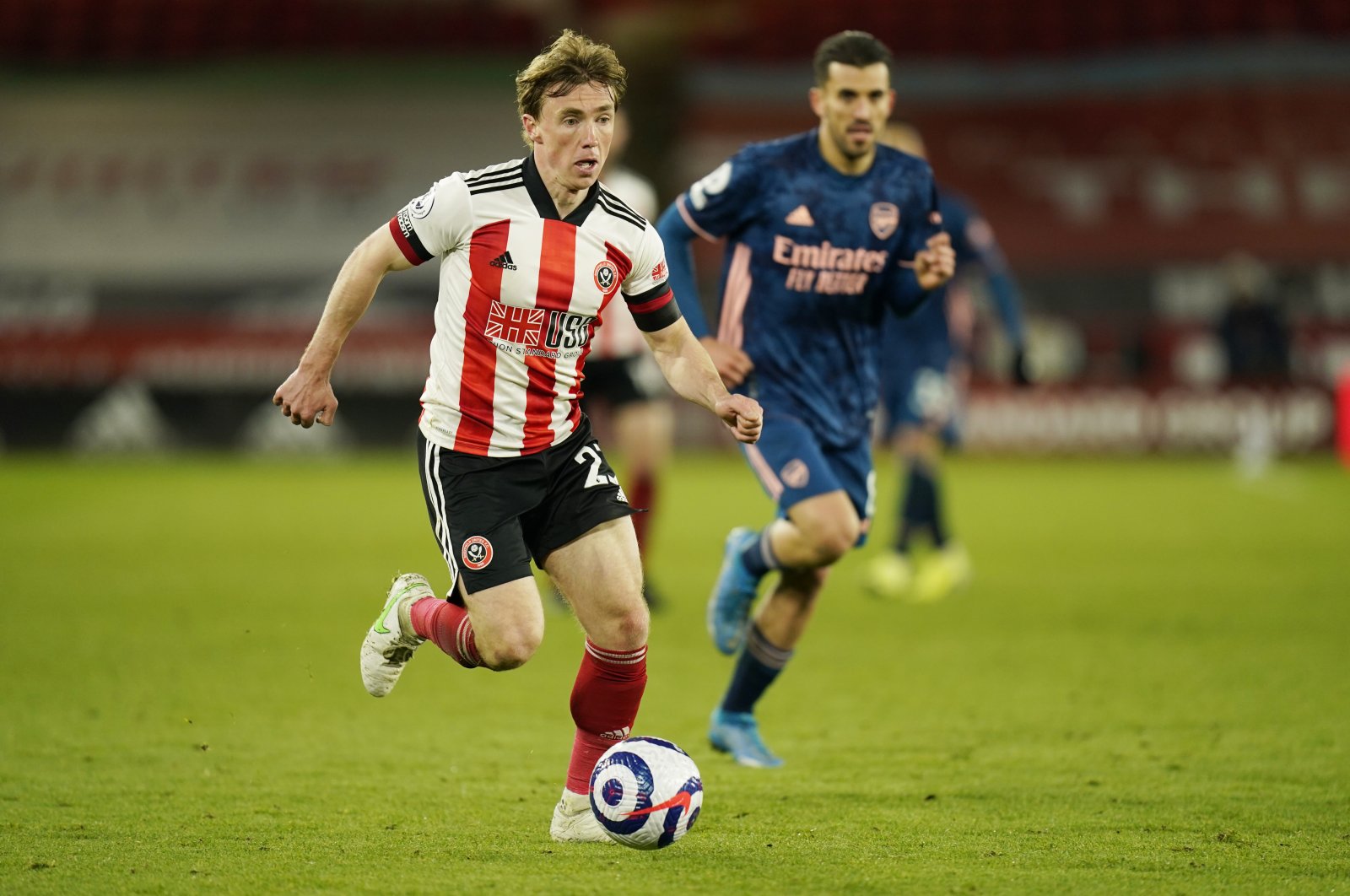 Arsenal kept alive their hopes of playing in European competition next season with a 3-0 win at Sheffield United who were left staring at relegation after Alexandre Lacazette scored twice and Gabriel Martinelli added another on Sunday, while late goals by Edinson Cavani and Mason Greenwood sealed Manchester United a 3-1 comeback win against Tottenham Hotspur, cementing their place in the Premier League top-four and leaving the London club's hopes of joining them looking slim.

The result lifted Arsenal to ninth place on 45 points from 31 games while Sheffield United stayed rooted to the bottom on 14 points, 18 adrift of safety with seven games remaining.

Arsenal manager Mikel Arteta was pleased with his team's performance and notably with keeping a clean sheet ahead of Thursday's Europa League quarter-final return leg at Slavia Prague after a 1-1 draw at the Emirates Stadium.

"I am really happy with the way we played, we scored some really nice goals and controlled the game the way we wanted," he told BT Sport.

"This is ideal preparation for Thursday. It has been a long run without a clean sheet. We played at a high level. From the start I felt the boys were at it, we were efficient."

Lacazette added: "It was important we won and it was a great day for us. I missed an easy chance on Thursday (in the first leg against Slavia) and so I wanted to score.

"The confidence was lacking a little bit. We know we have the quality but sometimes we miss a little bit at both ends of the pitch."

Arsenal missed several chances before Lacazette started and finished a flowing move in the 33rd minute as he side-footed a cheeky Dani Ceballos assist past home goalkeeper Aaron Ramsdale.

The French striker drilled a shot wide from 16 meters before Martinelli made it 2-0 in the 71st minute when he tapped in a close-range rebound as Ramsdale parried a Nicolas Pepe shot straight into his path.

It was the Brazilian's first Premier League goal since January 2020 when he netted against Chelsea and it came as a fitting reward for a fine all-round performance.

Lacazette sealed Arsenal's win in the 85th minute with his 50th Premier League goal as he took a defense-splitting Thomas Partey pass in his stride and steered it past Ramsdale from the edge of the penalty area.

Sheffield United's interim manager Paul Heckingbottom put on a brave face in the wake of his team's forlorn hopes of avoiding the drop.

"We can't feel sorry for ourselves," he said. "Seven more games and we won't be given anything. The players know they are playing for everything.

"These are the moments that make you hungry as a football manager and I will make sure the players feel that way."

Cavani had a goal controversially ruled out in an otherwise dull first half shortly before Son Heung-min gave Tottenham a 40th-minute lead with their first shot on target.

The second half was far more lively with United dominant.

Fred equalized from close range just before the hour-mark and Cavani then made up for his first-half frustration by diving to head home in the 79th minute.

The closest Tottenham came to an equalizer was when Cavani headed an attempted clearance against his own post.

But substitute Greenwood made sure of the win when he fired past Hugo Lloris with almost the final kick.

Second-placed United's win allowed them to cut runaway leaders Manchester City's lead to 11 points having played one game fewer, although perhaps, more importantly, they are nine points above fifth-placed Chelsea.

It was a result that said much about the two teams.

While a resilient United are now unbeaten in their last 23 Premier League away games, only four short of Arsenal's record, Tottenham have now dropped 18 points from winning positions in the Premier League this season.

It was also sweet revenge for United who were beaten 6-1 at home by Tottenham at the start of the season.

"We owed Tottenham a proper game -- we had that in our minds -- and today was much better than last time," United midfielder Scott McTominay said.

The opening half an hour was turgid but things livened up considerably in the 34th minute when United opened up Tottenham's defense with Cavani shooting past Hugo Lloris after being played in by Paul Pogba.

United's celebrations were cut short though as referee Chris Kavanagh was instructed by the VAR to check a monitor to see whether McTominay had caught Son in the face with his arm in the build-up. It had looked accidental but Kavanagh thought otherwise, much to the frustration of United's players.

To rub salt into United's wounds, Son opened the scoring shortly afterward following a long spell of Tottenham possession which ended with Harry Kane playing in Lucas Moura whose pass was turned past Dean Henderson by the South Korean.

Solskjaer said the injustice they felt "kick-started" his team and they were much better after the break with Lloris denying Bruno Fernandes with a fine low save and Pogba close to back-heeling an equalizer.

The pressure finally told though when United again opened up Tottenham's defense and while Lloris did well to save Cavani's effort the ball fell for Fred to ram in the equalizer.

Son forced a decent save from Henderson as Tottenham responded but United looked the stronger side and Greenwood, who replaced Marcus Rashford in the 72nd minute, picked out Cavani to head his side into the lead.

Greenwood then rounded off a bright cameo performance with his side's third.