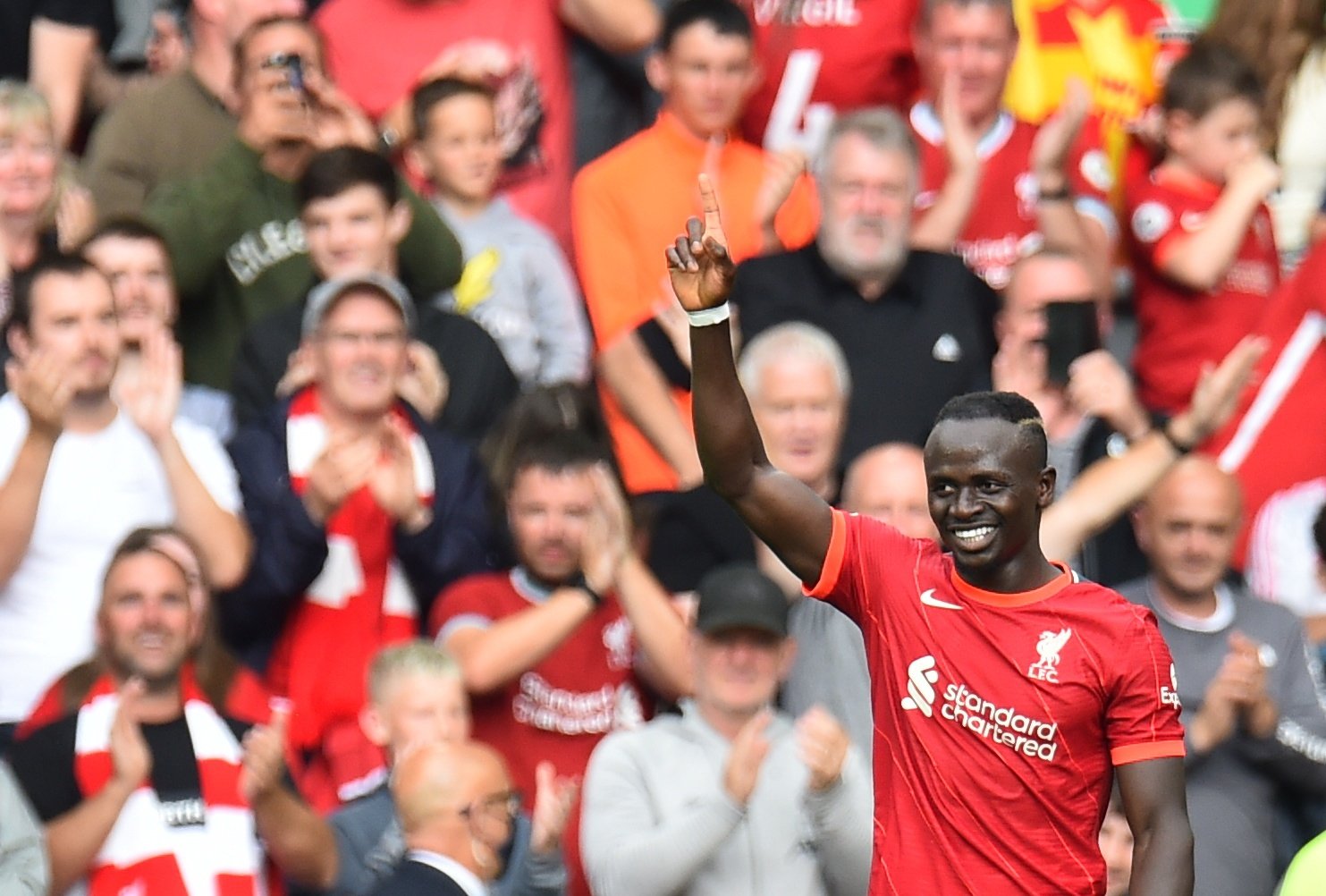 Senegalese forward Sadio Mane scored his 100th goal for Liverpool as the Reds secured a dominating 3-0 win over Crystal Palace to go top of the Premier League on Saturday.

Defending champion Manchester City, in the meantime, dropped two points at home to Southampton in a 0-0 stalemate; Arsenal eased the pressure on Mikel Arteta with a battling 1-0 victory at Burnley and a struggling Wolves lost their fourth match in five against 10-man Brentford.

Mane continued his eye-catching mastery of Palace, netting in his ninth league match in a row against the Eagles.

Mohamed Salah's glancing header from Kostas Tsimikas' corner was kept out by goalkeeper Vicente Guaita but Mane pounced to lash home, giving him a century of goals for Liverpool in all competitions.

Salah doubled the Reds' lead in the 78th minute before Naby Keita sealed the win with a sweetly struck volley.

Liverpool has made an impressive start to the season, scoring 12 goals in its opening five games and conceding just once.

"I told the boys that is one of the most hard-fought 3-0 wins I ever saw. We gave everything," Liverpool boss Jurgen Klopp said.

"Sadio's 100th goal for Liverpool, a massive mark! It was a really good game for Sadio. He worked incredibly hard again."

Arsenal was rock bottom of the table before last week's fixtures, but wins against Norwich and now Burnley lifted it to the relative comfort of 12th spot before the late kick-off between Aston Villa and Everton.

Odegaard, who signed from Real Madrid last month after spending part of last season at the Emirates on loan, broke the deadlock in the 30th minute, curling home a free-kick to give the visitors a 1-0 lead at Turf Moor.

Arsenal breathed a sigh of relief when video assistant referee (VAR) overturned a penalty awarded to Burnley in the second half after Matej Vydra tumbled to the turf following a challenge by goalkeeper Aaron Ramsdale.

"It was a hard-fought victory at a really tough place," Arteta said.

"We have players who are not at their strength playing in this type of game, but they did their best. I'm very proud of them defensively."

Manchester City will rue its inability to beat Southampton at the Etihad after consecutive 5-0 home wins.

It could have been worse for City after referee Jon Moss pointed to the spot when Kyle Walker bundled into the back of Adam Armstrong in the area, showing the England international a red card.

But the incident was reviewed by VAR and Moss eventually decided to overturn both decisions.

The build-up to City's match was dominated by a row over attendance levels at the Etihad, with manager Pep Guardiola urging fans to fill empty seats in comments that irritated some supporters.

But fans were frustrated by battling Southampton, who kept City's attackers at bay despite relentless pressure.

The home side thought it had snatched victory in the dying minutes after goalkeeper Alex McCarthy saved a Phil Foden header and Raheem Sterling tucked in the rebound, but the flag was raised.

"We were not good in our build-up and lost the ball because we were not clever today and a bit sloppy," Guardiola said.

"It is because we didn't do our process with the back four and Fernandinho. Those five players have to bring the ball forward for the others."

Matty Cash put Villa ahead with 25 minutes left and Lucas Digne's own goal doubled its lead before Leon Bailey made it three goals in nine minutes.

Watford beat Norwich 3-1 to condemn the promoted Canaries to its fifth consecutive defeat.

Watford took the lead in the 17th minute through Emmanuel Dennis, but Teemu Pukki equalized before halftime.

Ismaila Sarr put the visitors back in front in the 63rd minute and scored again with 10 minutes to go.

Ivan Toney scored a goal and created another for Bryan Mbeumo as 10-man Brentford beat Wolves 2-0 to maintain an impressive start to its first Premier League campaign.