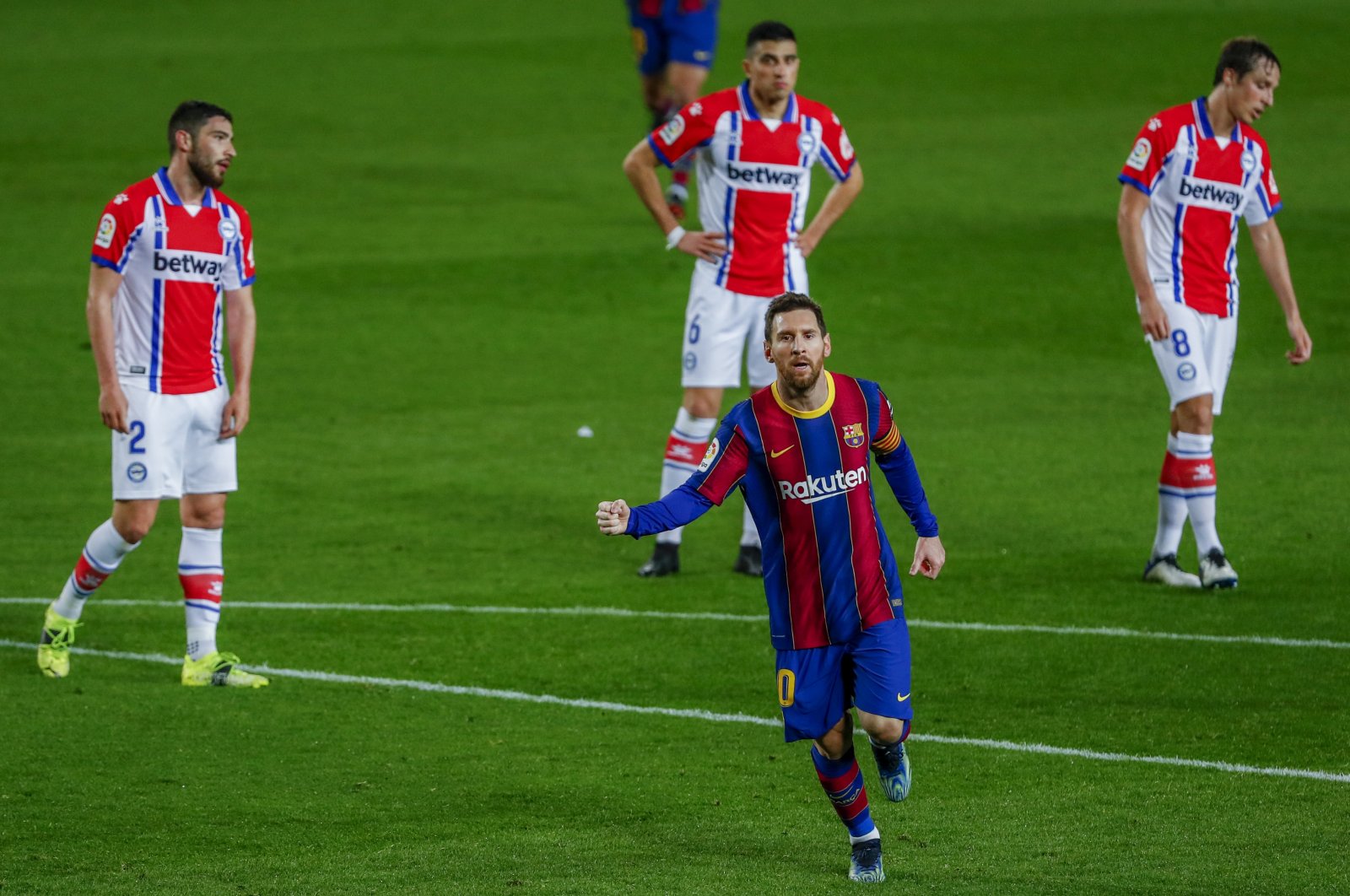 Lionel Messi scored two screamers in his record-equaling 505th Spanish league appearance for Barcelona to help them stay in touch with leader Atletico Madrid on Saturday.

Messi struck twice from well outside the area as Alaves was beaten 5-1. Messi matched former teammate Xavi Hernandez’s club record for the most league appearances by starting the match at Camp Nou.

The Argentine maestro scored his record 650th goal for Barcelona in a 2-1 home win over Athletic Bilbao in La Liga on Feb. 1.

"The game comes at a good time,” coach Ronald Koeman said. "We are on a good run and creating lots of scoring chances. They are a strong team, but so are we.” Atletico got goals from Marcos Llorente and Angel Correa to win at Granada 2-1 and bounce back from a draw against Celta Vigo in the last round, which ended a winning run of eight consecutive rounds. Diego Simeone’s side, which has lost only once in 21 rounds, is 8 points clear of Barcelona and titleholder Real Madrid.

Koeman said his team is ready for PSG, especially with Messi playing like he is. "Leo is decisive," Koeman said. "When we find him with our interior passing lanes and have players on the flanks giving him options, we make it easier for him because his vision is extraordinary. But to win this tie, we need Leo and all our players playing at their best."

It will also ease the pressure on Koeman who has scrambled to manage the crisis caused by the leak of Messi’s 555-million-euro ($673 million) contract.

In preparation, Koeman rested some first-choice players and debuted midfielder Ilaix Moriba, aged 18, and started Trincao, Riqui Puig and Junior Firpo. Moriba made an immediate impact when he provided an assist for Trincao to score in back-to-back league matches.

Right back Oscar Minguez found a hole in Alaves’ disciplined defense when he reached the end-line and crossed to Moriba at the far post. Instead of shooting, Moriba laid off for Trincao to rifle home the 29th-minute opener.

Messi took his first goal just before halftime when he cut back from the right flank and unleashed a powerful shot between two defenders that ricocheted in off the bottom of the upright. Moriba’s inexperience showed in the 57th when a poor pass was intercepted by Alaves’ Luis Rioja in Barcelona's half, and he charged forward for 2-1.

Trincao got his second goal in the 74th by picking off a rebound of goalkeeper Fernando Pacheco's save of Messi on the break. Messi was not to be denied a minute later with another rocket from outside the box. He looked well tracked by five Alaves players as he approached the area, but a quick change of pace and a move to put the ball on his favored left foot was all he needed to drive an unstoppable shot into the corner. Messi has eight goals in Barcelona’s seven-game winning run in the league. Firpo rounded off the rout in the 80th.

Aletico was stymied by Granada’s defense until Llorente struck in the 63rd from the edge of the area. Yangel Herrera equalized three minutes later after Atletico’s only defensive letdown when it failed to clear a corner kick. Correa put the front-runners back on top for good in the 75th with a shot that deflected off defender Jesús Vallejo and looped in over goalkeeper Rui Silva.

Coach Diego Simeone praised Yannick Carrasco and Mario Hermoso after recovering from the coronavirus. "Carrasco and Hermoso spent 14 days at home without playing. Do you know how difficult that is?” Simeone asked. "I had the coronavirus and I know all the work they had to do.” Atlético was still without infected forwards João Felix, Thomas Lemar, Moussa Dembele and midfielder Hector Herrera.

Sevilla, on the other hand, earned a ninth consecutive win across all competitions and strengthened its hold on fourth place after Munir El Haddadi’s second-half header downed Huesca 1-0. Borussia Dortmund comes to Sevilla in the Champions League round of 16 on Wednesday. Also, Eibar was held by Valladolid to 1-1.