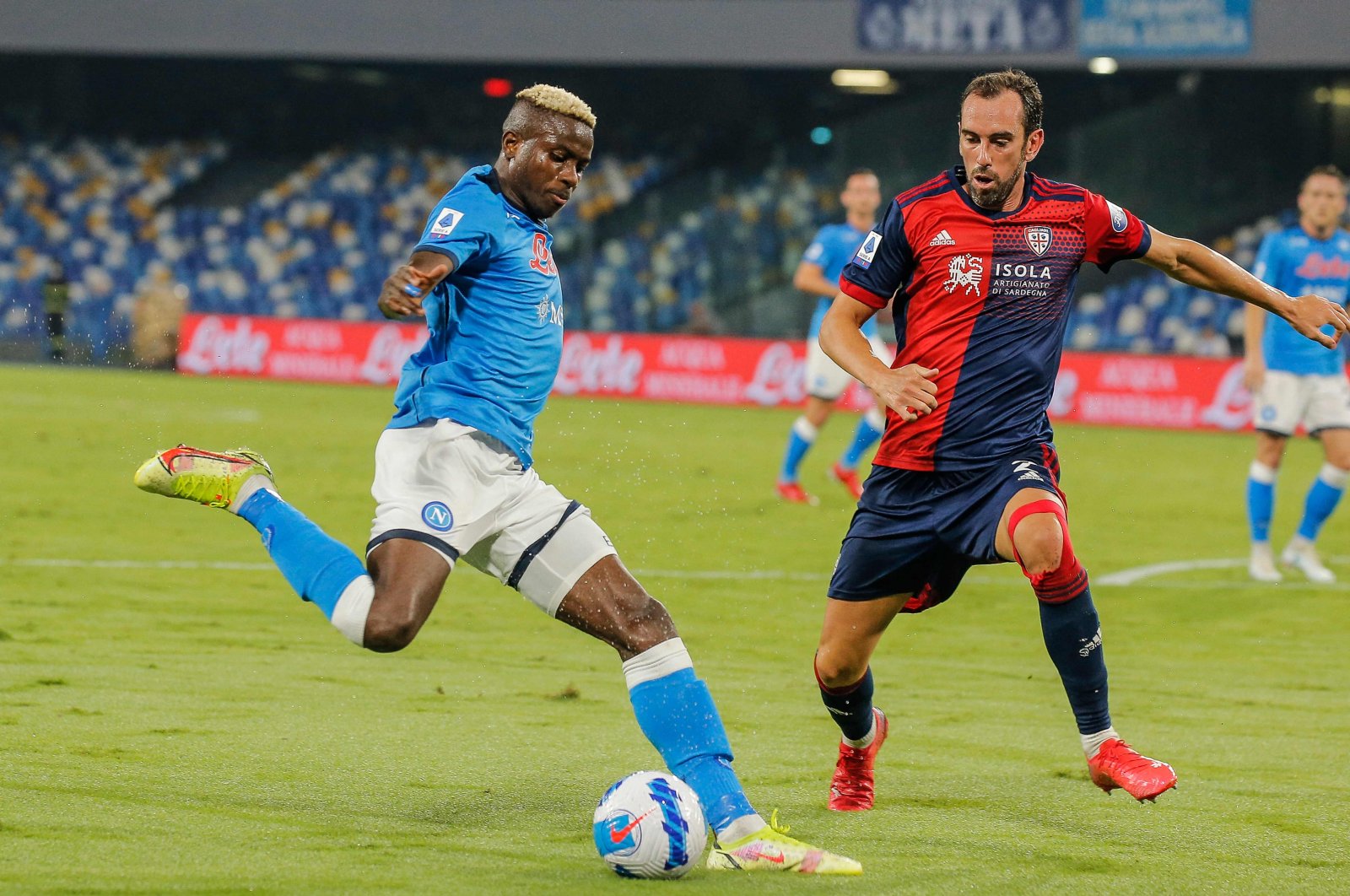 An unstoppable Napoli maintained its 100% start to the Serie A season with a 2-0 win over Cagliari on Sunday, reclaiming the top spot from Milan.

In Sunday's other key match, Lazio won an eventful derby 3-2 to down Jose Mourinho's Roma.

Luciano Spalletti's side cruised to its sixth victory in as many league games against a Cagliari team coached by former Napoli manager Walter Mazzarri thanks to Victor Osimhen's sixth goal in all competitions this month and a second-half penalty from Lorenzo Insigne, who prematch celebrated his 400th Napoli appearance.

It is two points ahead of AC Milan after another confident display that ends a week where Napoli scored 10 goals without reply in three league matches.

"The best way to celebrate was to win and score a goal," said Insigne to DAZN, who is four goals away from Diego Maradona's Napoli total of 115.

"We did it together as a team. We've got to keep our feet on the ground, keep our heads down and work because there is a very, very long way to go."

Next weekend Napoli travels to Fiorentina in what will be the first true test of its title credentials, as its 2-1 win over Juventus earlier this month came against a team missing a host of starters.

It made easy work of a passive Cagliari, with Osimhen making it four Serie A goals in five appearances this campaign in the 11th minute when he met Piotr Zielinski's low cross with a typically assured finish.

Osimhen was involved again when a low-key match was settled in the 57th minute, the in-form Nigeria attacker being cleaned out by Diego Godin and Insigne lashing home the subsequent penalty to ensure a simple win.

Goals from Sergej Milinkovic-Savic, Pedro and Felipe Anderson gave Lazio a tight derby win over Roma at a raucous Stadio Olimpico, which saw the two teams attack each other for 90 minutes.

Maurizio Sarri's side was winless in three league matches heading into the weekend but now sit sixth on 11 points, seven behind Napoli and just one behind fourth-placed Roma, who twice pulled goals back through Roger Ibanez and Jordan Veretout.

In the aftermath, Mourinho lashed out at referee Marco Guida and the video assistant referee (VAR) officials after what he saw as a clear foul on Nicolo Zaniolo just before Lazio launched the counterattack which ended with former Roma player Pedro putting Lazio 2-0 ahead in the 19th minute.

Juventus will have to face Chelsea in the Champions League without Paulo Dybala after the Argentina forward limped off with a thigh injury early in their 3-2 win over Sampdoria.

Dybala opened the scoring with nine minutes on the clock at a wet Allianz Stadium. Leonardo Bonucci and Manuel Locatelli netted the other goals to move Juve ninth on eight points, but soon afterward the 27-year-old Dybala left the field in tears, the latest in a long line of injuries.

Massimiliano Allegri's side host European champion Chelsea on Wednesday and the coach said Dybala and center forward Alvaro Morata, who also exited with a thigh problem towards the end of the match, would be out of action until after the next international break, which runs from after next weekend's matches to Oct. 15.

Fiorentina bounced back from the midweek defeat to Inter Milan with a battling 1-0 win at Udinese, which moved them into fifth on 12 points, six behind Napoli.

Promoted Empoli is threatening the European places after beating Bologna 4-2 to win its second match on the bounce and climb up to eighth, while Salernitana remains rooted to the bottom of the league with a single point after losing 1-0 at Sassuolo.