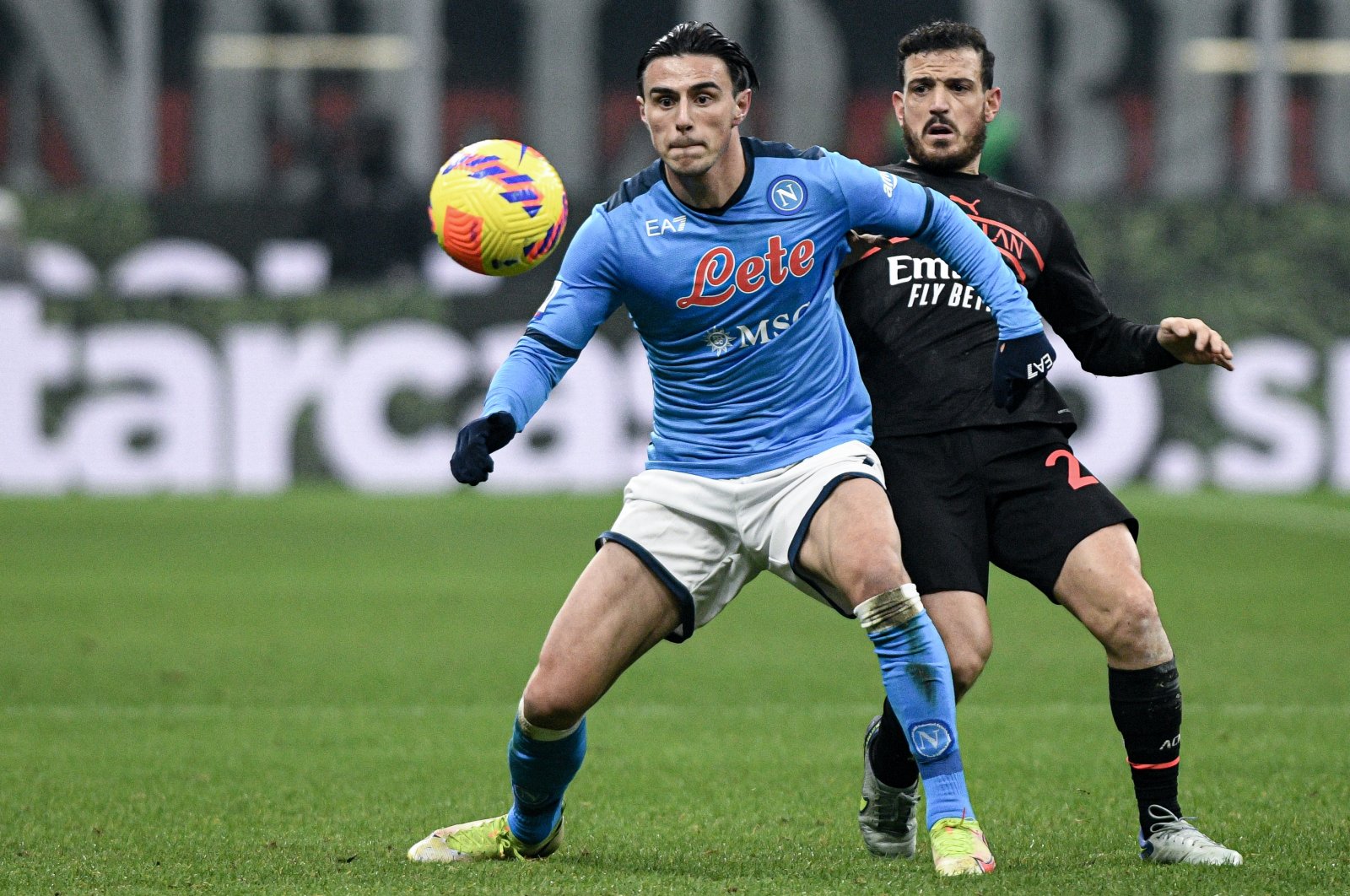 Napoli reignited its Serie A title bid with a hard-fought 1-0 win over fellow title hopeful AC Milan on Sunday that pushed it up to second in the league table.

Eljif Elmas headed home the decisive goal from Piotr Zielinski's fifth-minute corner at a freezing San Siro to end a mini-crisis for Luciano Spalletti's injury-ravaged side and put it four points behind champion Inter Milan, who is now guaranteed to be top at Christmas with one midweek round of fixtures left before the winter break.

Former league leader Napoli largely looked assured despite missing a host of starters including star striker Victor Osimhen, defensive lynchpin Kalidou Koulibaly and Italy forward Lorenzo Insigne and is back on track after two home defeats at the hands of Atalanta and Empoli.

"We had the game in hand pretty well for most of the match, apart from a few moments when Milan's physical play didn't allow us to settle," said Spalletti to DAZN.

However, Milan thought it had snatched a point in the final minute after a wave of late pressure when Franck Kessie lashed home from close range, only for the strike to be disallowed for offside following a pitchside video check by referee Davide Massa.

Olivier Giroud challenged for the ball with Juan Jesus before the pair fell in a heap, and Giroud was then ruled to have been in an active offside position, underneath Jesus, as the Napoli defender attempted to clear while on his back.

The decision to rule out Kessie's strike sparked fury from Milan fans in the stands, whose team was also missing a number of first-team players, among them starting center back Simon Kjaer, who is out for the season.

"I know they'll say that they correctly followed the rules, but how can a player who's on the floor, who does nothing to intervene make any difference to the defender?" Milan coach Stefano Pioli asked DAZN's pundits.

"Juan Jesus is not blocked by Giroud. What else can I say It's a shame because the team didn't deserve to lose this match."

Pioli's side has been bumped down to third following that controversial ending but is level on 39 points with Napoli as four teams battle for the "Scudetto" with Atalanta lurking a further two points back in fourth.

Dusan Vlahovic was again on target for Fiorentina in Sunday's early match but could not help the Viola put pressure on Serie A's Champions League positions.

Serbia forward Vlahovic struck his league-leading 16th goal of the season in the 51st minute in Florence to pull a goal back after his team trailed by two at half-time.

Lucas Torreira leveled just after the hour mark but Vincenzo Italiano's side then lost Cristiano Biraghi to a second yellow card in the 68th minute and could not complete a comeback which would have put them within three points of the top four.

Fiorentina sits sixth, level on 31 points with Roma and Juventus and six points behind Atalanta.

"Without the Biraghi red card, I think we would have gone on to win," said Italiano to Sky Sport Italia.

Vlahovic, who will turn 22 next month, has now scored 33 Serie A goals in 2021 – matching Cristiano Ronaldo's total last year – and is expected to be a target for some of Europe's biggest clubs in the January transfer window.

He has refused to sign an extension to his current contract which expires in the summer of 2023, meaning Fiorentina could move to cash in early in order to get maximum value from its star player.

Torino moved up to 10th after beating 10-man Verona 1-0 with Tommaso Pobega's strike midway through the first half, while Thomas Henry snatched a late point for Venezia in a 1-1 draw at Sampdoria after Spezia and Empoli also played out a 1-1 stalemate earlier in the day.