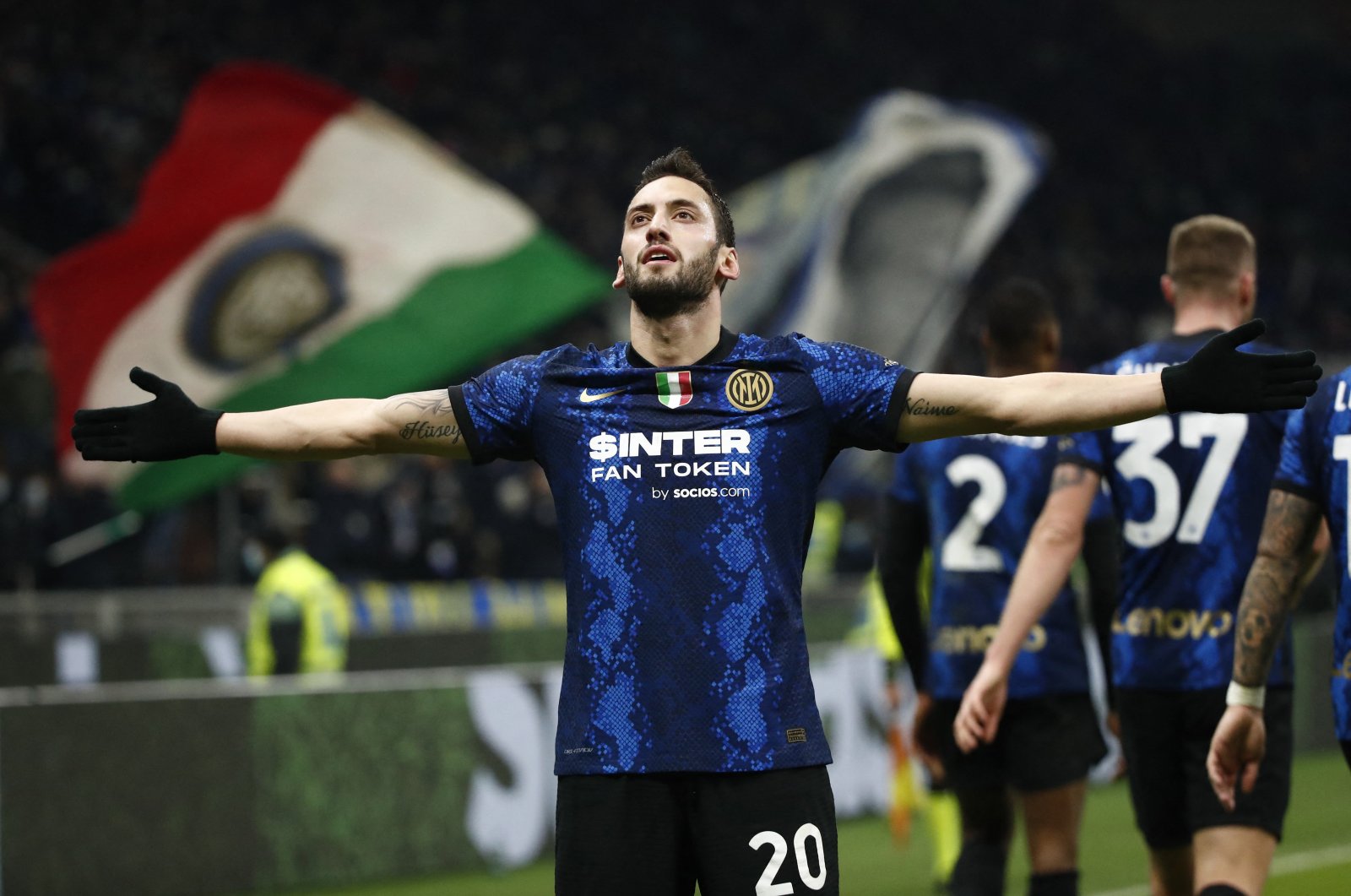 D10S: A year after his death, Maradona cult runs strong in Naples

Inter Milan's Turkish midfielder Hakan Çalhanoğlu continued his impressive form in the Serie A after he scored one and assisted another in the Nerazzurri's 4-0 win over Cagliari on Sunday.

Another great all-round performance on the night earned Çalhanoğlu, who moved in from city rival AC Milan this season, the man of the match award and took his goal tally to six this season, five of which came in the last six matches.

The win helped the reigning champion take advantage of its title rivals slipping up to move top of the Serie A table.

"I'm delighted and really proud to be here. I'd like to thank the team because my teammates have made me feel important and I try to give my all." Çalhanoğlu told the official Inter website.

"I feel the club and the supporters' trust. I just have to thank them ... It's an honor to play for a club with these fans. We've played so well in many games this season and finally, we're top. We've dominated so many games and we want to carry on like this."

Inter is now a point ahead of local rival AC Milan with the statement performance at the San Siro against the Sardinians, who had goalkeeper Alessio Cragno to thank the hosts didn't run up double figures.

Inter, who racked up 15 shots on target, hit the bar and missed a penalty, is also four points ahead of former leader Napoli who slipped back to fourth following a shock 1-0 home defeat at the hands of the surprise team Empoli.

"We saw a lot of good teams struggle after their European matches so we knew we needed to be focused. The boys were brilliant right from the start," said Inzaghi to DAZN.

"We're top of the league and in the Champions League last 16 after 11 years, it's hard to do much better."

Cagliari is second-from-bottom and its supine performance, even with a number of absences, so angered manager Walter Mazzarri that he left his post-match interview with DAZN after answering just one question.

Martinez opened the scoring with a bullet header from Çalhanoğlu's corner just before the half-hour, and Inter was poised to open a two-goal half-time lead after Cragno brought down the marauding Denzel Dumfries.

Cragno saved Martinez's penalty but four minutes after the break Sanchez doubled Inter's lead with a stunning volley after Nicolo Barella hooked over a flashy cross with his back to the penalty area.

Inter put the match to bed with two brilliant goals in two minutes, with Çalhanoğlu drifting in from the left flank and lashing home a powerful strike before Martinez made it 10 for the season in the 68th minute, collecting Barella's floated pass and dinking home a delicate finish.

Patrick Cutrone's bizarre winner with 20 minutes remaining in Naples fired promoted Empoli seventh, above AS Roma and Lazio who lost 2-1 at Sassuolo and hit Napoli's bid for a first title since the days of Diego Maradona.

Cutrone rose highest for a corner and his flick flew at Andre-Frank Zambo Anguissa, who minutes after his return from injury headed his clearance into the back of Cutrone's head and then watched the ball fly back into his own goal.

It was an unfortunate way to lose for Napoli who had 30 shots, struck the bar through Eljif Elmas in the first half and had a Juan Jesus goal ruled out for offside nine minutes before Cutrone's winner.

"The goal was a set-piece play that we've been working on for a long time," joked coach Aurelio Andreazzoli.

Napoli held the top spot before last weekend's matches but has now also been overtaken by Atalanta, who moved third with its 2-1 win at Verona.

Napoli travels to Milan next weekend hoping to not fall further behind the pacesetters with key players either out or only just returning from injury.

Atalanta is just three points behind Inter after coming back from Giovanni Simeone's 12th goal of the season with strikes in either half from Aleksei Miranchuk and Teun Koopmeiners at Verona.

A sixth straight league win on the road also has Gian Piero Gasperini's side seven points above fifth-placed Fiorentina in the race for the Champions League.

"Today we took a step forward, regarding mentality and determination, otherwise you don't win these kinds of matches," said Gasperini.

The hard-fought win will be a boost for Atalanta after it missed out on the last 16 of the Champions League.

It is in Monday's draw for the Europa League play-off round after finishing third in Group F behind La Liga outfit Villarreal and Manchester United.