Özil bids farewell to Arsenal, arrives in Istanbul for Fenerbahçe 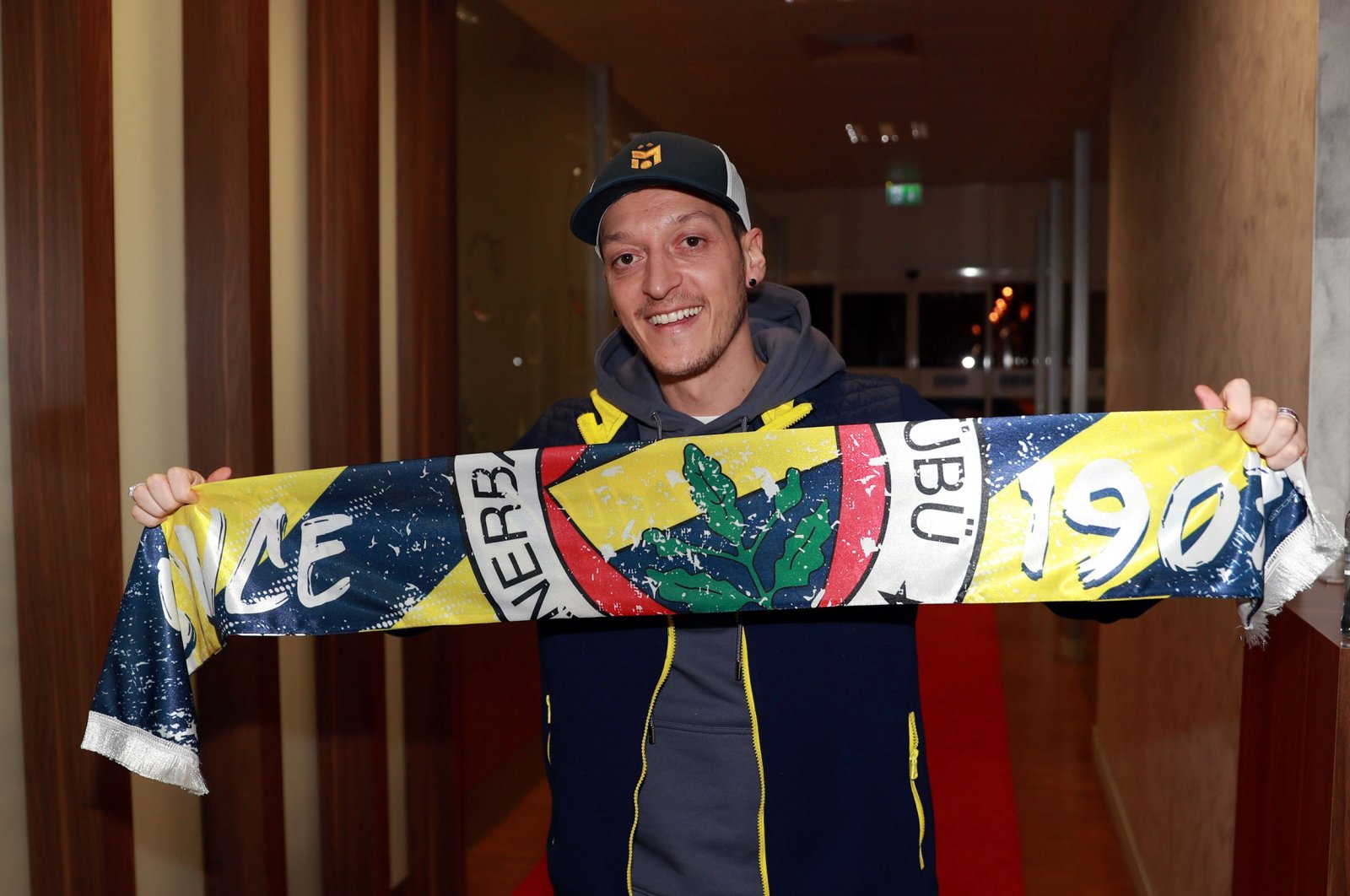 German-Turkish midfielder Mesut Özil poses with a Fenerbahçe scarf upon his arrival at Atatürk Airport in Istanbul, Turkey, Jan. 18, 2021. (Reuters Photo)
by DAILY SABAH WITH AGENCIES Jan 18, 2021 11:18 am

The German-Turkish footballer said his childhood dream has finally come true with the move to Fenerbahçe, one of Turkey's biggest clubs

Mesut Özil said farewell to his Arsenal teammates and flew to Turkey on Sunday to join Fenerbahçe in a bid to reignite a once-flourishing career that faltered in London.

The former Germany midfielder, who is of Turkish descent, hasn't played for Arsenal since March after falling out of favor with manager Mikel Arteta over concerns about the player's work rate.

32-year-old Özil wasn't even included in Arsenal's Premier League squad for the season, despite being one of the highest earners, and has been ostentatiously tweeting his support for the team from home during matches.

Arsenal has now managed to offload Özil before his contract expires in June. Fenerbahçe posted images of Özil leaving London on a private jet on Sunday night.

After 7 1/2 years at Arsenal, which he joined from Real Madrid, Özil is heading to one of Turkish President Recep Tayyip Erdoğan's favored clubs.

Özil posed for photos with President Erdoğan in May 2018 in the run-up to the Turkish general election. The German football officials criticized the photo-op and dealt with the situation heavy-handedly and a witchhunt on social media followed, forcing the veteran footballer to retire from the German national team.

Fenerbahçe won the last of its 19 Turkish league titles in 2014. The team has not been on the Champions League group stage since a match-fixing scandal broke in 2011.

Özil's last match for Arsenal was in March, a week before soccer was suspended at the outbreak of the coronavirus, so he might not be match-sharp to start immediately for Fenerbahçe.

Özil became ostracized by Arsenal just as Arteta was hired as manager in December 2019. The club distanced itself from Özil who stood up for Muslims in the Xinjiang province of China, condemning the country's detention of more than 1 million Uighurs and other minorities in so-called reeducation camps.

In a social media post, Özil also denounced China for burning Qurans, closing mosques and the killing of religious scholars.

Özil's criticism of China led to Arsenal's match being pulled from Chinese television. The Chinese government accused Özil of being "blinded and misled" and Arsenal said "the content he expressed is entirely Özil's personal opinion" and stressed it was not getting involved as a club.

Talking to the club's FBTV on arrival, Özil said: "I'm very excited. I've always been a Fenerbahçe supporter. This is not just a dream come true for Fenerbahçe, my dream has also come true with this move. I can't wait to put on the jersey. Hopefully, my teammates and I will be successful."

Özil also thanked the Fenerbahçe supporters for backing him through thick and thin.

Fenerbahçe coach Emre Belözoğlu, in his reaction, said: "I hope this is going to be great for him and Fenerbahçe. I want to welcome him and his family to their homeland."

"There is a lot I can say about Özil ... This was his childhood dream and a dream for all Fenerbahçe supporters. God willing, we'll win many titles together."

Before flying to Istanbul the player and his family underwent two separate COVID-19 tests and will quarantine as per Health Ministry rules.

According to initial reports, the former Arsenal star agreed to a 3 1/2-year deal, worth 5 million-euro ($6.2 million, TL 45.2 million) annually, with an additional signing bonus of 2.5 million euros.