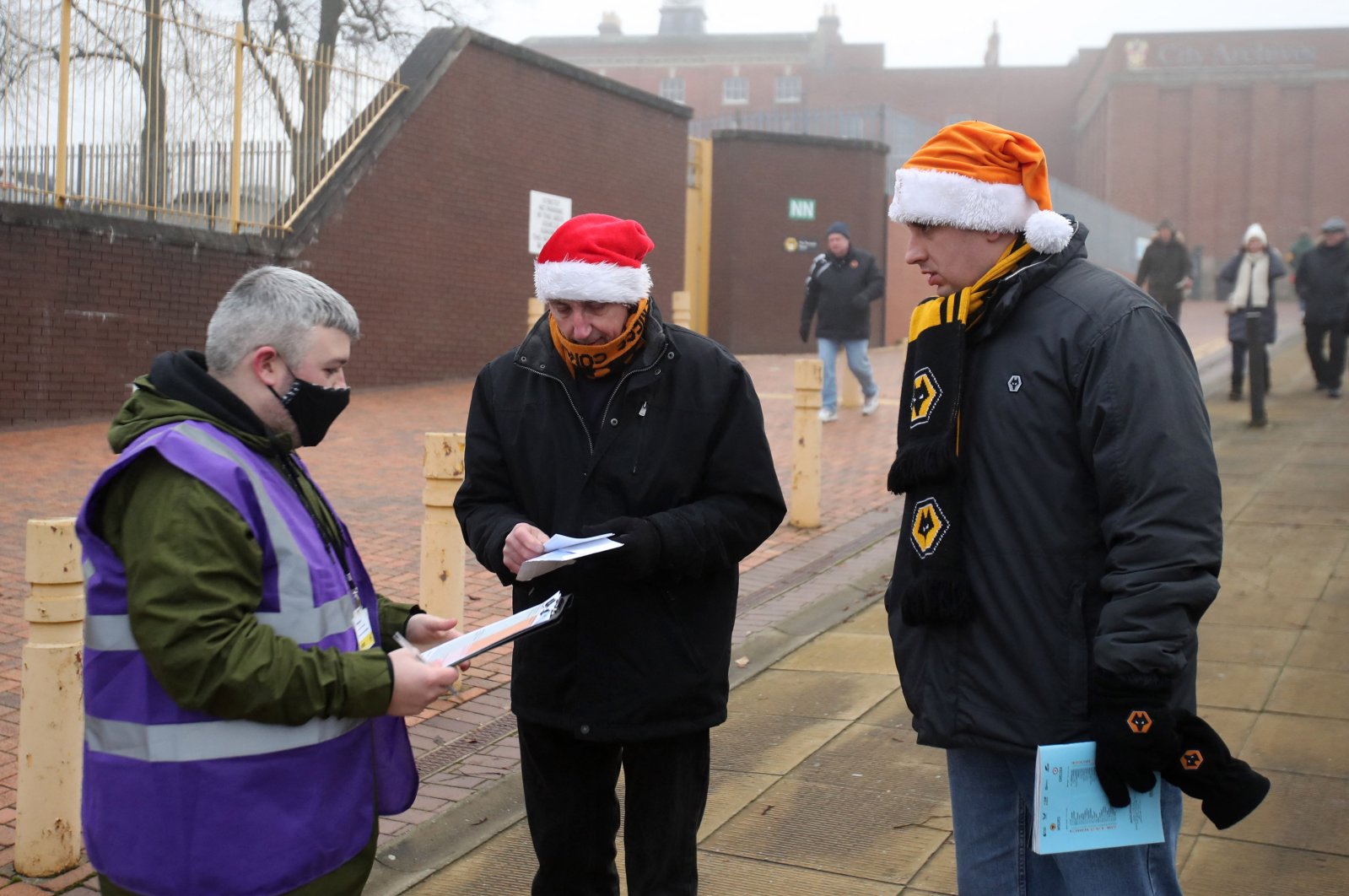 Fans get their COVID-19 passes checked outside the stadium before a Premier League match between Wolves and Chelsea, Wolverhampton, England, Dec. 19, 2021.
by REUTERS Dec 21, 2021 12:53 pm
RECOMMENDED

Premier League clubs have agreed to plow through the busy festive period fixture despite a surge in COVID-19 cases forcing the postponement of several matches.

The decision came following a meeting between all 20 top-tier teams on Monday.

Ten Premier League games have been postponed this month due to outbreaks amid a busy schedule where teams are set to play three times between Boxing Day and Jan. 3.

The Premier League released a statement shortly after the meeting saying that a record 90 new COVID-19 cases were detected among players and staff in the past week, a significant increase from its total of 42 in the previous round on Dec. 6-12.

"The safety of everybody is a priority and the Premier League is taking all precautionary steps in light of the recent rise in COVID-19 cases across the country," the league said in a statement.

Only four of the weekend's 10 fixtures were played after teams told the Premier League they were missing players due to COVID-19.

The Premier League only grants a postponement if a club has fewer than 14 players available, with the board examining requests on a case-by-case basis.

"While recognising a number of clubs are experiencing COVID-19 outbreaks and challenges, it is the league's collective intention to continue the current fixture schedule where safely possible," the Premier League said.

"A range of issues were discussed at this afternoon's meeting, including the adaption of the Premier League COVID-19 postponement process in response to the impact of the Omicron variant.

"The league also confirmed to its clubs today that 92% of players and club staff have received one, two or three COVID-19 vaccination doses, with 84% of players on the vaccination journey."

Chelsea manager Thomas Tuchel and Liverpool's Jurgen Klopp had earlier voiced concerns over going through matches amid the crisis.

Tuchel criticized the Premier League for putting his coronavirus-hit Chelsea side at "huge risk" by forcing them to play Sunday.

"We were put in a huge risk of health and safety to the players, not just because of COVID but also physically," he said.

"Ties in the third and fourth rounds of this season's competition will be played to a finish on the day, with extra-time and penalties if required," the FA said.

However, the English Football League (EFL), which also organizes the League Cup, said its fixtures will be played as scheduled.

League Cup semifinals are played over two legs in January. The competition's quarterfinal matches – with seven Premier League teams in action – are set to be played this week.

"While the League acknowledges there will likely be future postponements to navigate where COVID-19 cases are identified, there is optimism that disruption can be minimised following implementation of RED protocols, a daily testing regime and ongoing vaccination rollout," the EFL said.

EFL Chief Executive Trevor Birch said: "We will continue to work with clubs, authorities and other agencies to monitor the COVID-19 case rate and be prepared to respond accordingly.

"For now the view remains that we can continue to deliver games safely where clubs have sufficient healthy personnel in place, on and off the pitch."

The EFL had 19 games across its divisions postponed last weekend due to COVID-19 outbreaks.