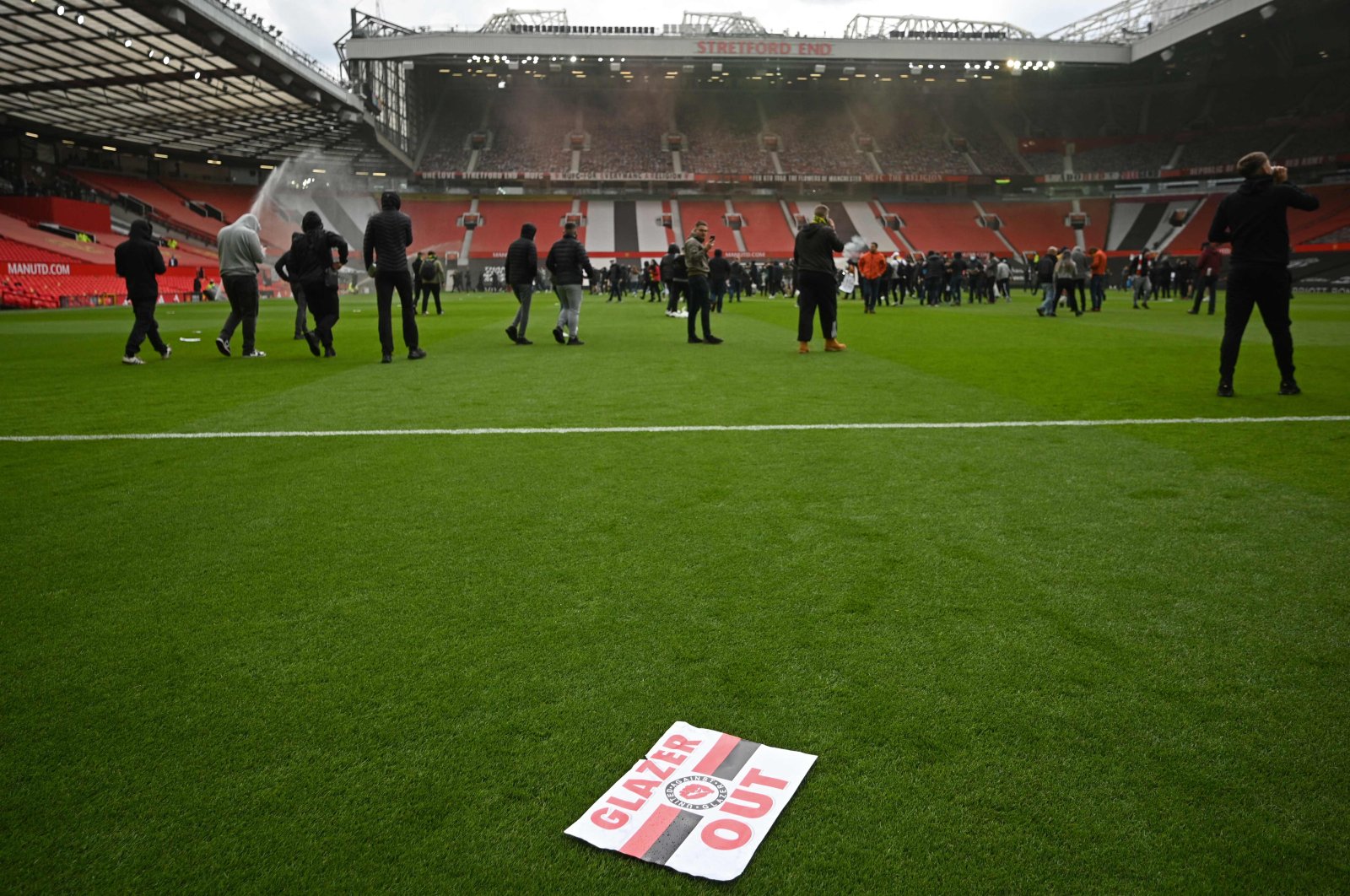 Supporters protest against Manchester United's owners inside the Old Trafford stadium in Manchester, northwest England, May 2, 2021. (AFP Photo)
by REUTERS May 02, 2021 5:29 pm
RECOMMENDED

A group of Manchester United fans, protesting against the Glazer family's ownership of the club, stormed the Old Trafford pitch ahead of Sunday's Premier League game against Liverpool.

British media reported fans turned up at Old Trafford at 1 p.m. local time (12 p.m. GMT) to protest against the owners with banners and flares.

They pushed down the barriers to force their way into the ground ahead of one of the biggest domestic games of the season, which was scheduled to kick off at 4.30 p.m. local time. They left the pitch after about 10 minutes.

The match later was postponed after United fans forced their way into the stadium and stormed the Old Trafford pitch to protest against the club's owners – the Glazer family.

"Following discussion between the Police, the Premier League, Trafford Council and the clubs, our match against Liverpool has been postponed due to safety and security considerations around the protest today," United said in a statement after the game was called off.

"Discussions will now take place with the Premier League on a revised date for the fixture."

Liverpool issued a statement saying they were in full agreement with the decision.

An hour after the scheduled 3:30 p.m. GMT kickoff, both sets of players were still stuck in their hotels. The Lowry Hotel, where United's players were preparing for the match, was also the scene of a large anti-Glazer protest.

Greater Manchester Police said around 100 United fans took to the pitch, some letting off flares and others carrying posters calling for the Glazers to end their ownership of the club they bought in 2005. One young fan was photographed on top of one of the goals.

Police said some United staff locked themselves in rooms.

The match was being played behind closed doors due to COVID-19 restrictions but that did not stop chaotic and ugly scenes inside and outside Old Trafford, which left one police officer requiring emergency treatment after being slashed with a bottle, Greater Manchester Police said.

Media representatives covering the game, including Reuters, were kept outside as the stadium was locked down after the fans had been removed.

In a statement, the Premier League said: "Following the security breach at Old Trafford, the Manchester United versus Liverpool game has been postponed.

"This is a collective decision from the police, both clubs, the Premier League and local authorities. The security and safety of everyone at Old Trafford remains of paramount importance. We understand and respect the strength of feeling but condemn all acts of violence, criminal damage and trespass, especially given the associated COVID-19 breaches."

There was no word on when the match would be played. Second-placed United needed a win to prevent Manchester City from being crowned champions on Sunday.

While the protest had been planned and was largely peaceful, it descended into chaos as fans infiltrated the stadium.

Hundreds of fans also gathered outside the ground, letting off green and gold flares – the colors of United's shirts when they were formed as Newton Heath and adopted by those who have regularly protested against the club's hierarchy.

Mounted police moved in to try to clear the areas outside the stadium and there were ugly clashes with bottles and barriers being thrown at police officers.

"The behaviour displayed today by those at both Old Trafford and The Lowry Hotel was reckless and dangerous," GMP Assistant Chief Constable Russ Jackson said.

"We understand the passion many supporters have for their team and we fully respect the right for peaceful protest. But it soon became clear that many present had no intention of doing so peacefully."

The protest follows United's initial decision to join a European Super League (ESL) along with five other English clubs. The plans for that breakaway league fell apart within days due to widespread opposition.

"On the back of the indefensible ESL proposals, and an "apology" from the Glazers which we do not accept, we need to give fans a meaningful share in the ownership of United and a meaningful voice in how it is run," Manchester United Supporters Trust (MUST) said in a statement after the postponement.

"The Government now needs to act. That has to mean a process which results in fans having the opportunity to buy shares in their club and more to the point no single private shareholder holding a majority ownership of our football clubs which allows them to abuse that ownership.

"The Government needs to reflect the views of ordinary people who see that now is the time to reclaim the people's game," added MUST.

Former United defender Gary Neville, who was a fierce critic of the club's decision to join the Super League, was on the ground as part of the Sky Sports commentary team.

United owner Joel Glazer, who was named the European Super League vice chairperson when the announcement was made, has apologized to the fans in an open letter after they withdrew from the project.

However, that apology seems to have been rejected by the club's supporter base who protested outside Old Trafford last week, which followed demonstrations at United's training ground.

The pitch invasion followed a protest outside the Lowry Hotel, where the United squad traditionally spend the night before any home match in preparation for games.

United was bought by the American Glazer family for 790 million pounds ($1.1 billion) in 2005. Although it has been listed on the New York Stock Exchange since 2012, the Glazers retain majority ownership.