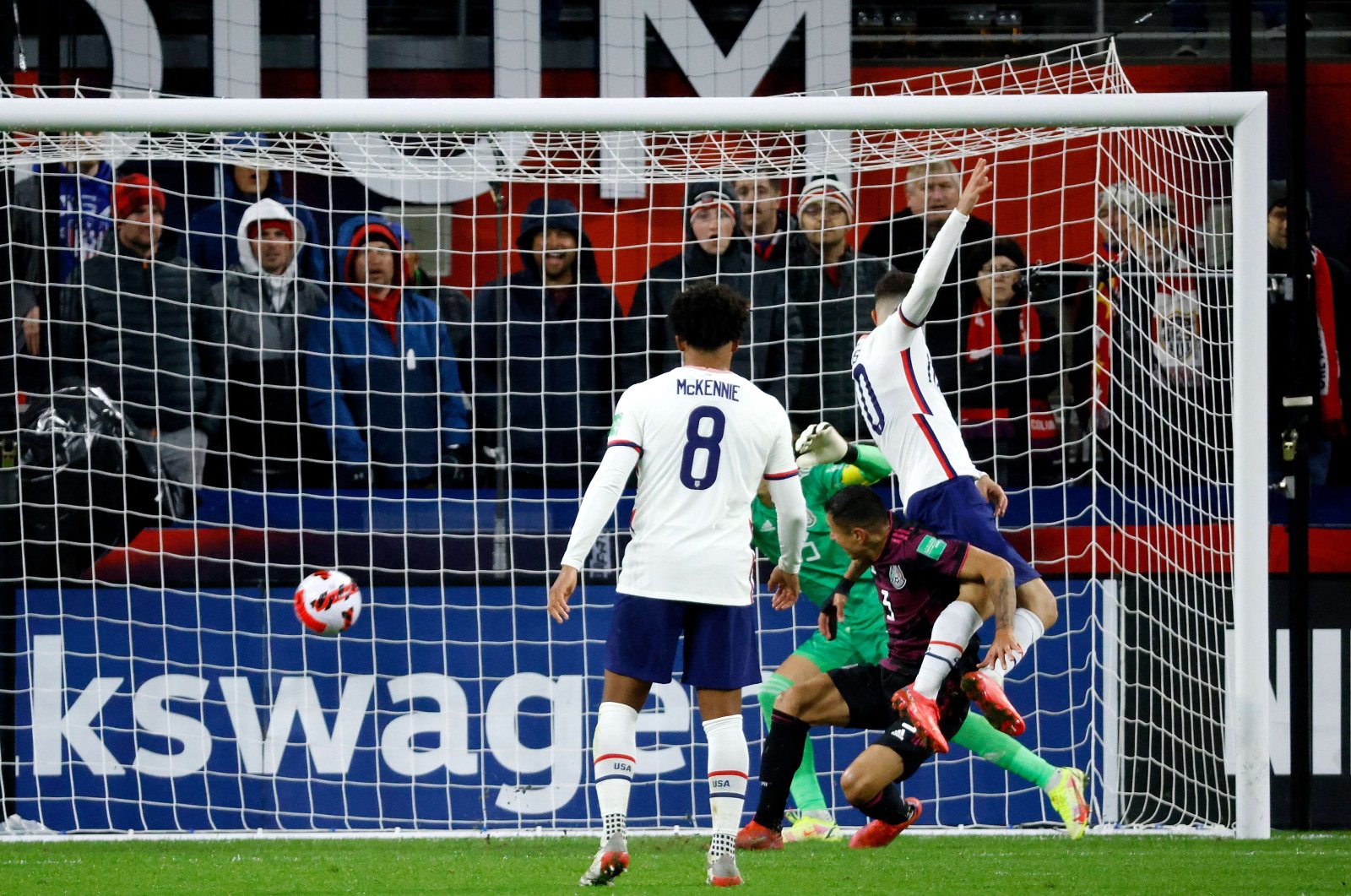 Mirror, mirror on the wall, what's the most common scoreline of them all? Well, when it comes to the past two decades of the U.S. - Mexico soccer rivalry, that would be 2-0, better known as "Dos a Cero."

In Friday night's qualifier held in Cincinnati, Christian Pulisic sent a message – with his head and his undershirt.

Take that, Mexico. Pulisic and the Americans are back atop the region.

Pulisic scored on his very first touch in the 74th minute, Weston McKennie added a goal in the 85th and the United States beat Mexico 2-0 Friday night in a World Cup qualifier – the “Dos a Cero” scoreline that became traditional early in the 21st century.

When Pulisic scored on his first touch five minutes after entering, he ran to the endline and pulled up his jersey to show the red-white-and-blue clad fans.

“Man in the mirror,” was scribbled in dark ink.

Earlier in the week, El Tri goalkeeper Guillermo Ochoa was quoted as saying: “Mexico is the mirror in which the United States wants to see itself.”

A night that began with smoke – from fireworks during “The Star-Spangled Banner” as LED lights flashed through the stands – ended with Michael Jackson's “Man in the Mirror” played on the public address system.

U.S. coach Gregg Berhalter said Thursday that Ochoa's remarks showed ”that we have a long way to go to get the respect of Mexico."

Fans in the crowd of 26,000 at the new TLQ Stadium booed Ochoa with every touch.

“I think you guys know the message. I don't need to like speak on it too much,” Pulisic said. “It’s just an idea that came in the head."

“Just to send a message,” Weah said. “Before the game, Mexico was talking a lot of smack. To shut them up, we have to continue to win games, continue to beat them. That's the only way we're going to earn their respect and get the world's respect.”

The win was the third this year for the 13th-ranked Americans over No. 9 Mexico following a 3-2 victory in the Nations League final in June and a 1-0 victory in the CONCACAF Gold final in August.

“To win three in a row is obviously amazing,” Pulisic said, “but that doesn’t mean that it's time to be complacent or time to think oh, we're the best around."

Heated matches between Mexico and the U.S. are the norm, and this one ended with the U.S. a man short after Miles Robinson – who scored the Gold Cup goal – got a pair of yellow cards.

“We fiercely dislike Mexico's soccer team, right, and we're fierce competitors and we want to win every time on the field,” Berhalter said, making a point to distinguish Mexico's team from its people. “Afterwards, you shake hands and you move on. We have a lot of respect for them.”

The U.S. and Mexico have 14 points each, followed by Canada with 13, Panama 11, Costa Rica, Jamaica and El Salvador six each and Honduras three.

Three nations from North and Central America and the Caribbean qualify for next year’s tournament in Qatar and the fourth-place nation advances to a playoff.

The U.S. won four straight home qualifiers against Mexico by 2-0, all at Columbus, Ohio, before falling 2-1 in November 2016 at Crew Stadium. That led to the Americans missing the 2018 World Cup.

Pulisic, one of the few holdovers, entered in place of Brenden Aaronson in the 69th minute. Since a high left ankle sprain on Sept. 8 at Honduras, Pulisic had been limited to a pair of late-match appearances for Chelsea.

“I never had an injury like that," he said. “It was just dealing with pain in different spots of my ankle. And it was just about making sure it was right and now I feel like it's in a good spot.”

Zack Steffen, in his second straight qualifier in goal, kept the game 0-0 when he dived to get his left hand on a shot by a streaking Hirving Lozano in the 18th. The Americans outshot Mexico 18-8 but couldn't break through.

Yunus Musah, an 18-year-old emerging as a key American midfielder, passed to the 21-year-old Weah on the right flank to set up the first goal. Weah, the son of Liberia president and former FIFA Player of the Year George Weah, crossed and Pulisic got in front of Johan Johan Vásquez and headed the ball past Ochoa for his 17th international goal.

McKennie, dropped from the roster for two matches in September for violating team COVID-19 protocols, scored with an 8-foot right-footed shot after exchanging passes with Jesús Ferreira. The return pass deflected off McKennie's boot, hit Vásquez and bounced into the path of McKennie, who ran onto the ball for his eighth international goal.

Rain fell for much of a match that began in a 42-degree chill, the coldest for a U.S. qualifier since the Snow Classico of March 2013, a 1-0 win over Costa Rica played in 29-degree temperature at Commerce City, Colorado.

Play, however, was hot.

McKennie is suspended for Tuesday's qualifier at Jamaica after getting his second yellow card of the competition, assessed in the 68th for arguing with and running into the back of Salvadoran referee Ivan Barton after Aaronson was clawed in the right eye by Luis Rodríguez with no call.

Robinson got a yellow card in the 59th for elbowing Rodríguez on the chin and a second in the 90th for tumbling over Lozano, causing the U.S. to finish a man short.

“Confidence is through the roof,” Weah said, “but the most important thing is to stay modest and stay humble because CONCACAF is hard.”