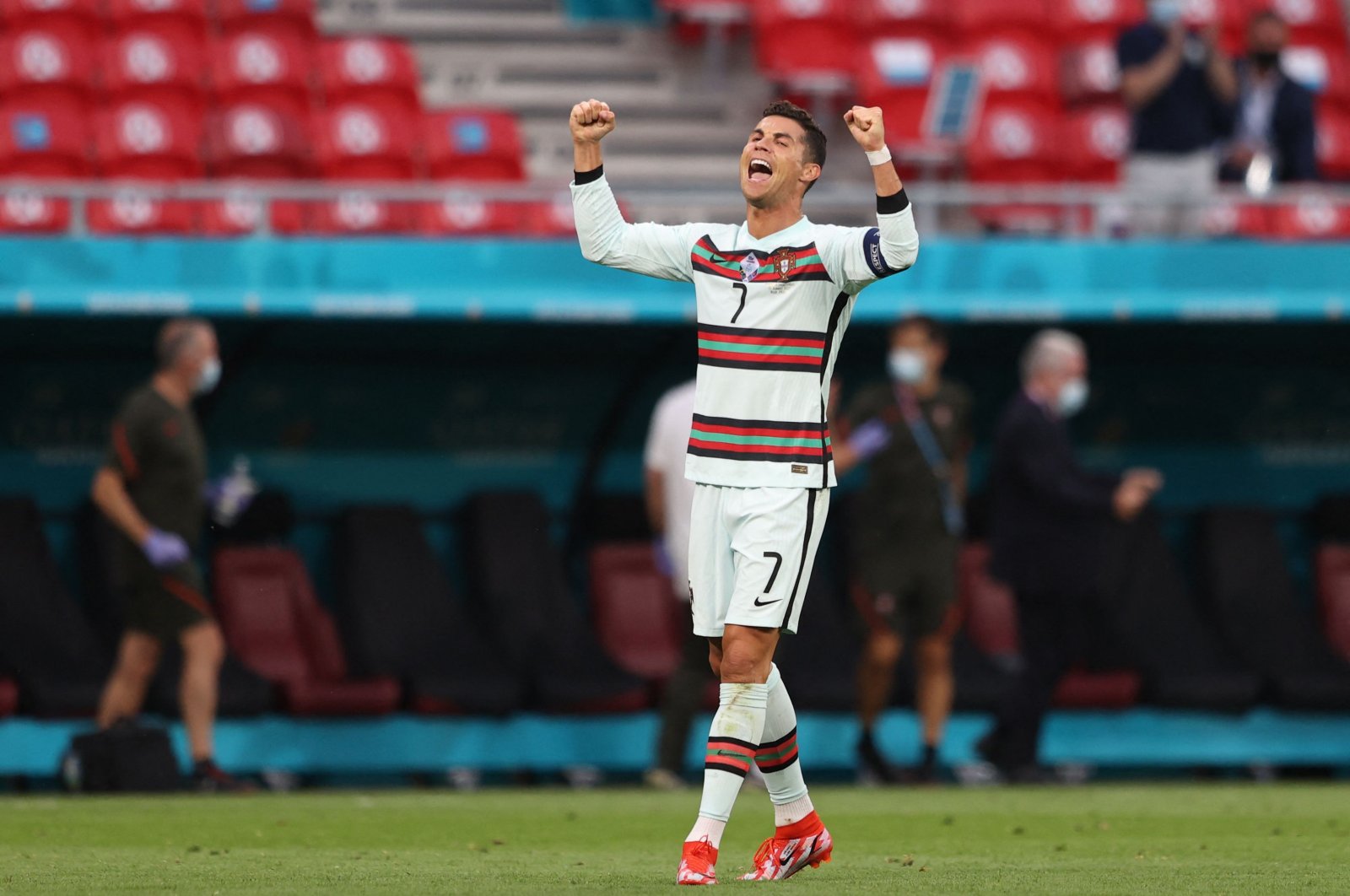 Ronaldo shines in Euro 2020 as the driving force of Portugal, having already achieved the title of all-time leading scorer of the European Football Campionships with his goal bonanza

Portugal heads into the last matches of the group stage with their biggest weapon: Cristiano Ronaldo. Age is no limit for the 36-year-old football superstar who dominates the headlines with his scoring skills.

Ronaldo became the EURO finals' all-time top scorer with 11 goals after netting two goals in his country's opener. The superstar of Portugal and Italy's Juventus, Ronaldo scored two goals against Hungary in a UEFA EURO 2020 group match on Tuesday to be the record holder, reaching 11 goals in total. Second-half goals led Portugal past Hungary 3-0 in a EURO 2020 Group F match at Budapest's Puskas Arena. Ronaldo has now played in five EURO finals for the Portuguese national team (2004, 2008, 2012, 2016 and 2020). He has also become the first player to play and score in five EURO finals. With the brace that he scored against Hungary, Ronaldo supplanted former France star Michel Platini, who scored nine goals for "Les Bleus" (The Blues).

Alan Shearer, a retired player and one of the all-time legends of English football, scored seven goals for the Three Lions in the European championships to finish third in the top-scoring category.

Ronaldo may go on scoring in the ongoing EURO 2020 to extend his record. Led by Ronaldo, the Portuguese team has two more games in Group F as they will take on Germany on Saturday and play against France on Wednesday. Having made his Portugal debut in 2003, Ronaldo played in all of the EURO finals starting from 2004. The first major tournament that he appeared in was EURO 2004 held in Portugal. Ronaldo was 19 in that contest as he was one of the promising players in the Portugal squad where Luis Figo, Rui Costa and Nuno Gomes were the big boys. The Juventus forward scored his first EURO goal against Greece with a header in a Group A game in Porto's Estadio do Dragao, but Greece stunned favorites Portugal 2-1. He scored another header against the Netherlands in the semifinals at Estadio Jose Alvalade. Portugal earned a 2-1 win against the Dutch national team to make the final in Lisbon, where the hosts were dramatically eliminated by the finals' underdogs Greece 1-0 through a goal netted by Angelos Charisteas in the second half. Ronaldo and his team Portugal completed EURO 2004 as runners-up.

In EURO 2008 co-hosted by Austria and Switzerland, Ronaldo scored one goal and it was against the Czech Republic in the Group A match at Stade de Geneve. Portugal won it 3-1, but they were halted by Germany in the quarterfinals with a 3-2 loss in Basel's St. Jakob-Park. Ronaldo was promoted to Portugal captaincy for EURO 2012 held in Poland and Ukraine. He scored three goals in the 2012 finals, two against the Netherlands in a Group B game as Portugal won 2-1 in Ukraine's Kharkiv. Ronaldo netted a header against the Czech Republic in the quarterfinals, his third goal in EURO 2012. Portugal beat the Czechs 1-0 in Warsaw to progress to the semifinal stage; however, Spain eliminated them on penalties. In EURO 2016 hosted by France, Ronaldo scored three goals to equalize with Platini. In a Group F match, he scored twice against Hungary as the game ended 3-3 in Decines-Charpieu near Lyon. Then Ronaldo scored his third EURO 2016 goal against Wales with a header in the semis in Decines-Charpieu as Portugal earned a 2-0 victory to march to the final at Stade de France, Saint-Denis. Portugal clinched the EURO 2016 title, beating hosts France 1-0 in the final that Ronaldo had to go off in the first half for an injury following a tackle by French midfielder Dimitri Payet.

A man of records, Ronaldo is also the all-time highest scorer of Portugal. He piled up 106 goals for his country in 176 international caps, a difficult record to break. The experienced forward is still followed by Pauleta, who scored 47 goals for the Portuguese national team from 1999-2006. Pedro Miguel Carreiro Resendes or widely known as Pauleta, 48, was a prolific forward of his generation. The Paris Saint-Germain forward retired from football in 2008.