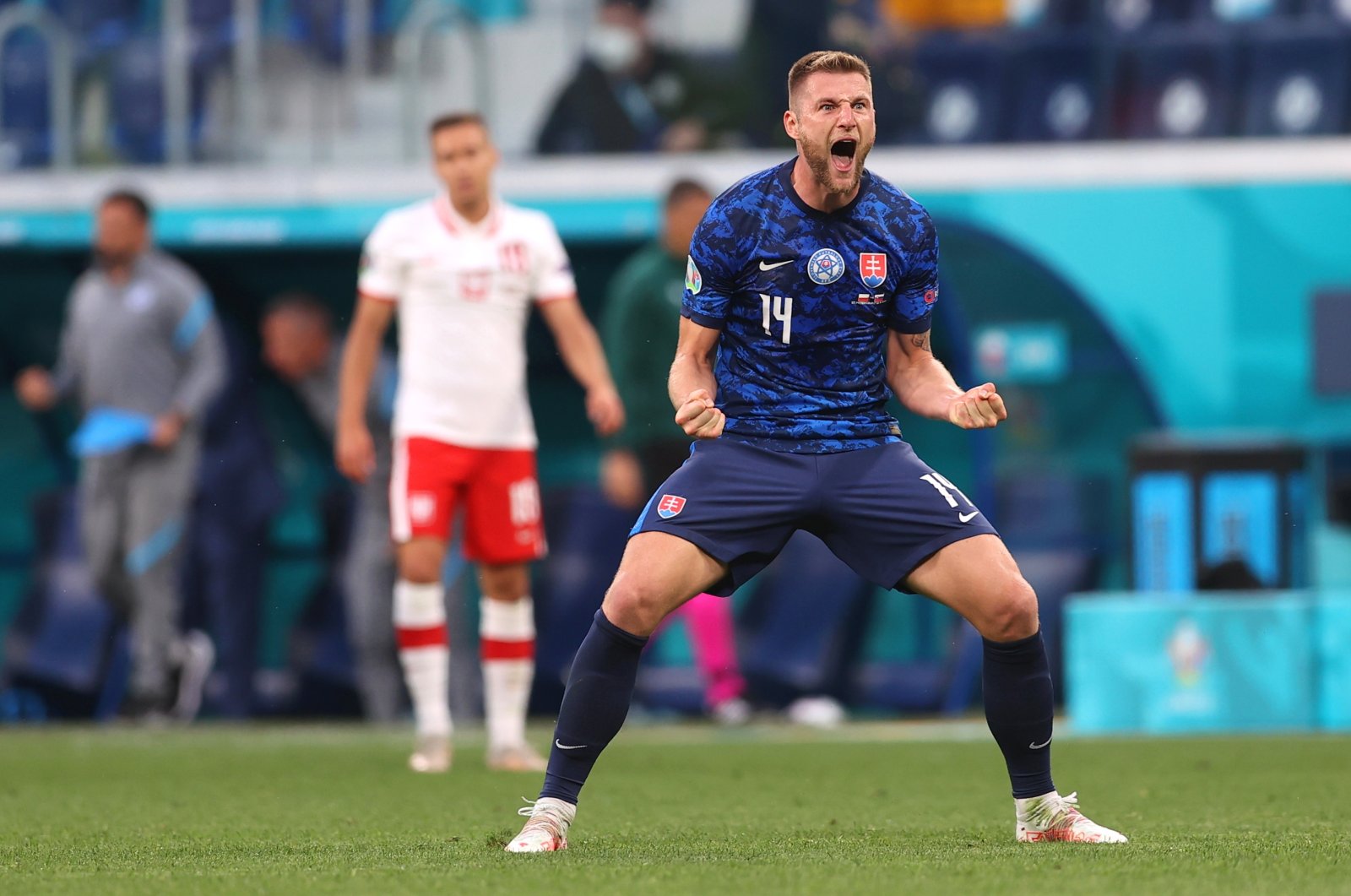 Milan Skriniar stole the spotlight in Slovakia's 2-1 win over a 10-man Poland in the opening Euro 2020 Group E clash Monday with a spectacular performance crowned with a brilliant goal.

The 26-year-old center-back netted with a superb 69th-minute shot into the bottom right corner after Polfootand had midfielder Grzegorz Krychowiak sent off in the 62nd for a second yellow card.

Slovakia took an 18th-minute lead out of the blue through an own goal by Poland goalkeeper Wojciech Szczesny before Karol Linetty equalized in the 46th. Szczesny, who was sent off in the opening game of Euro 2012 when Poland were co-hosts, became the first goalkeeper in the competition's history to be credited with an own goal.

Poland was on the front foot in the opening stages but fell behind as Robert Mak beat two defenders on the left flank with neat footwork and cut inside before his shot hit the post and rebounded off Szczesny into the net.

Slovakia continued to soak up the pressure but always looked dangerous on the break and its central midfielder Juraj Kucka curled a long-range effort over the bar in the 27th minute.

Krychowiak came up with Poland's first meaningful effort when his shot from 25 meters sailed over, with Slovakia's compact defense cutting out the supply routes to striker Robert Lewandowski.

Poland coach Paulo Sousa opted for Lewandowski as the lone striker, with his attacking options limited by injuries that ruled both Arkadiusz Milik and Krzysztof Piatek out of the tournament.

The Polish top scorer failed to make any impact in the first half and scuffed an attempt from inside the penalty area woefully wide in the 42nd minute. Lewandowski has only two goals in 12 matches at a World Cup or European Championship.

Poland leveled 30 seconds after the break as Mateusz Klich released Maciej Rybus and the left-back squared the ball back for Linetty to scramble a close-range shot into the far corner.

The Poles were left with 10 men after Krychowiak received his marching orders for a clumsy challenge on an opponent and Skriniar, who man-marked Lewandowski out of the game, struck with some aplomb at the other end.

The Poles failed to clear a corner and Skriniar, who won the Serie A league title with Inter Milan this season, gave Szczesny no chance with his fierce low shot from 14 meters.

Lewandowski glanced a close-range header wide in the 87th minute as Poland pressed in the closing stages and Jan Bednarek missed their final chance in stoppage time when he fired wide from inside the penalty area.

Slovakia, who reached the last 16 on their European Championship debut five years ago, play Sweden next in Group E on Friday while Poland goes to Seville to face Spain the following day.

Marek Hamsik, who led Slovakia at the 2010 World Cup as well as Euro 2016, earned his record-extending 127th cap for his country after shaking off a niggling calf injury.

Hamsik, with his Mohawk, has long been the most famous player in Slovakian soccer but now he has some fierce competition in the 26-year-old Skriniar.