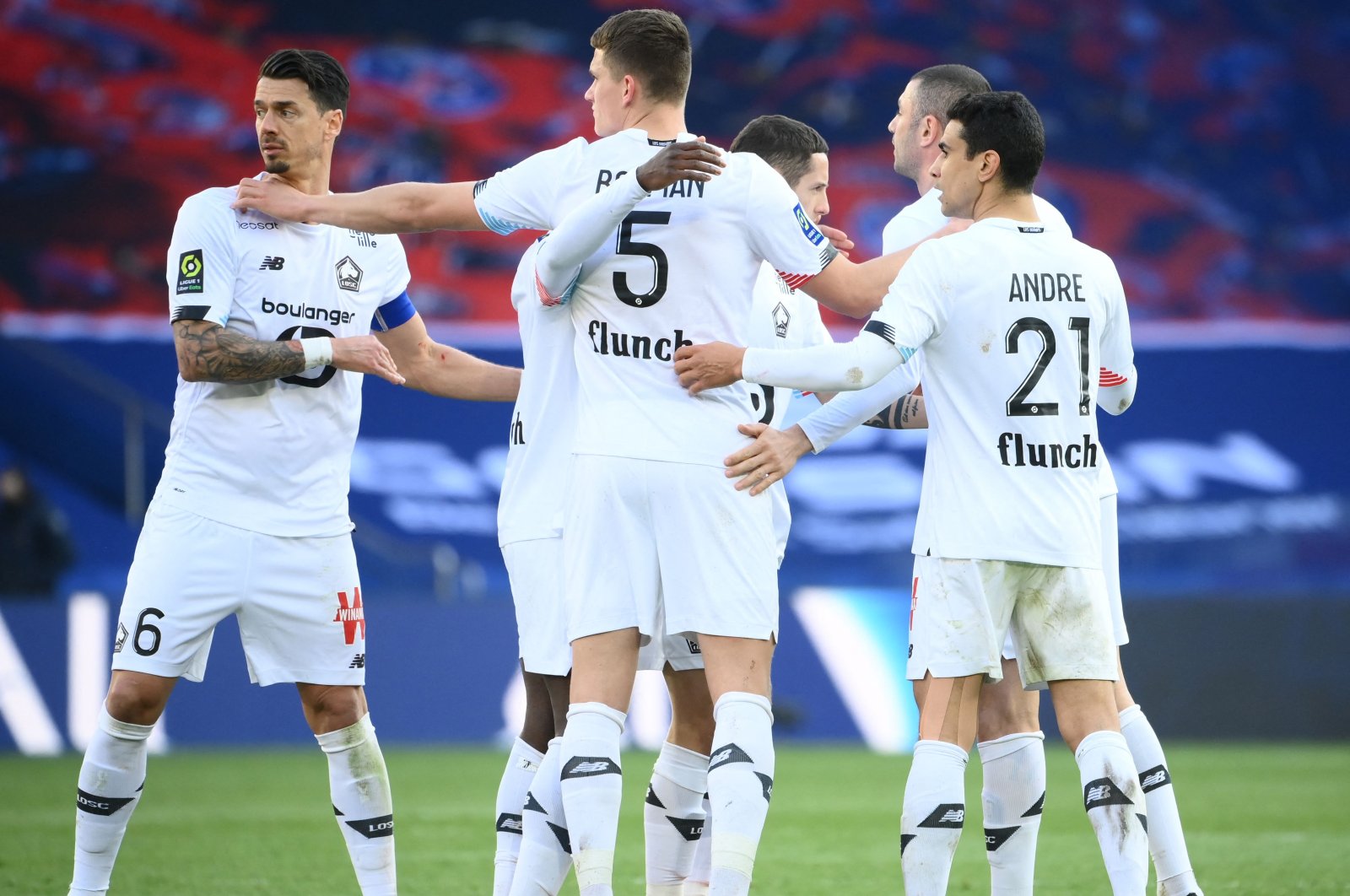 Despite losing several players to COVID-19, French title contender Lille eased past Paris Saint-Germain on Saturday in a 1-0 win and moved to the top of the table in Ligue 1 with 66 points.

Brazilian star Neymar was sent off late as a limping Jonathan David scored the only goal to give Lille the victory. The Canadian striker was struggling with an ankle injury when he fired home in the 20th minute.

He was forced off soon after and came out on crutches to watch the second half with heavy strapping where he had been caught by Idrissa Gana Gueye.

Mike Maignan turned a Kylian Mbappe shot around the post not long before the goal arrived from the visitors' first attack. Jonathan Ikone picked out David whose shot from 12 yards deflected in off Thilo Kehrer for his 10th of the season.

The 21-year-old striker was replaced by Timothy Weah before half-time, while Lille held on at the other end, with Neymar having one shot saved by Maignan in the second half and then heading wide from a Marquinhos cross.

Lille might have even scored a second as in-form Turkish striker Burak Yılmaz was denied by Keylor Navas after a counter-attack.

Lille held on to beat PSG in the capital for the first time in a quarter of a century, with a frustrating afternoon for the hosts summed up when Neymar, in his first Ligue 1 start in over two months, was sent off at the end of the match.

The Brazilian and Lille defender Tiago Djalo, who reacted to Neymar's shove with a foul-mouthed rant, were both shown second yellow cards and dismissed.

The result sees Lille take a big step towards a first Ligue 1 title in a decade, their last title being in 2011, just before the Qatari takeover of PSG, which changed the face of French football.

It would be a remarkable achievement for the club from France's far north to pip the Parisians, who have won seven of the last eight league crowns and face Bayern Munich – missing the injured Robert Lewandowski – away in the first leg of their Champions League quarter-final scheduled midweek.

Lille, who were without Yusuf Yazıcı and Zeki Çelik after the Turkey midfielder and right-back both tested positive for COVID-19, defended thoroughly throughout and were the sharper side at the Parc des Princes to bag a deserved three points after two consecutive defeats in competitive matches.

Çelik, 24, played in the Turkish national team's 2022 FIFA World Cup European qualifiers against the Netherlands on March 24 that his native country won 4-2 in Istanbul. But he did not travel to Spain's Malaga for the Turkey-Norway match on March 27 which Turkey won 3-0.

Çelik also missed the Latvia game on March 30 in Istanbul, which ended 3-3. He was out of the Turkish squad before the Norway clash but no official statement was made about his omission.

Meanwhile, Yazıcı played all three matches in the European qualification for the 2022 World Cup in Qatar. He started all three of those ties and provided an assist against Norway.

Mauricio Pochettino's PSG had been fancied to go on and ease to another league title after winning 4-2 away in Lyon just before the recent international break, but this result raises doubts about their credentials. The Parisians have now suffered three straight home league losses for the first time since 2007.

Christophe Galtier's squad is three points clear of PSG with seven games left, with Monaco another point behind in third after beating Metz 4-0 earlier on Saturday. Monaco, which has now lost only once in 16 league games, struck a double blow early in the second half.

Striker Wissam Ben Yedder was surprisingly left on the bench but came on to notch a fine third when he cut inside a defender and thumped the ball under the crossbar in the 76th.

Ben Yedder was fouled by central defender John Boye and took the penalty to make it 4-0 in the 88th.

In a tight first half, Monaco struggled to break down a well-organized Metz side. Volland came closest when he headed against the post from Aleksandr Golovin's cross in the 33rd.

Metz almost scored near the end of the half, but Monaco goalkeeper Benjamin Lecomte made a fine low save to keep out forward Lamine Gueye's shot.

Olympique Lyonnnais, fourth on 60 points, is also in the race and can reclaim the third spot and go level on points with PSG by beating fifth-placed RC Lens later on Saturday.