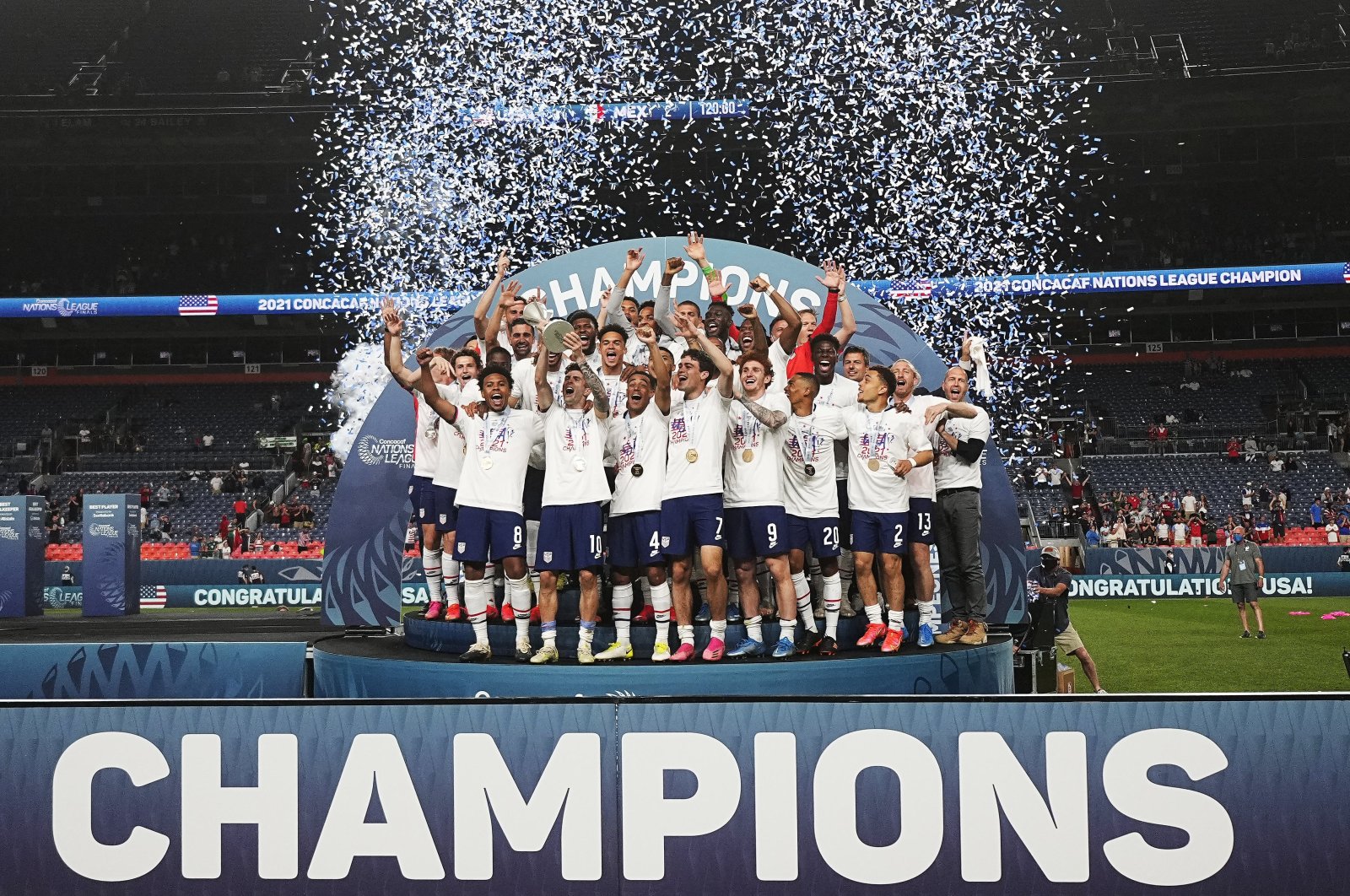 The United States celebrates a 3-2 win against Mexico in extra time in the CONCACAF Nations League championship soccer match, in Denver, Sunday, June 6, 2021, in Denver. (AP Photo)
by ASSOCIATED PRESS Jun 07, 2021 8:34 am
RECOMMENDED

The United States was victorious in the first CONCACAF Nations League as an extra time penalty converted into a goal by Chelsea midfielder Christian Pulisic helped his team carry the final against Mexico 3-2.

Gio Reyna and Weston McKennie scored as the 20th-ranked U.S. twice overcame deficits against No. 11 Mexico, which led after just 63 seconds.

Pulisic, fresh off of winning the Champions League with Chelsea on May 29, cut inside the penalty area and was pulled down by Carlos Salcedo in the 108th minute.

Panamanian referee John Pitti did not initially signal a penalty but consulted a video review and then pointed to the spot. Mexico coach Tata Martino appeared to receive a red card for putting a hand on an official during the review and Hirving Lozano was given a yellow card for arguing after the decision.

Pulisic sent the ball to the upper corner past the left arm of goalkeeper Guillermo Ochoa for his 16th international goal.

Pitti again did not make a call in the 119th minute when Luis Romo’s header went off the left arm of McKenzie, whose arm was perhaps only slightly outstretched. Horvath, who replaced injured starter Zack Steffen in the 69th minute, waited to the last moment and dived right to bat away the penalty by Mexico’s captain.

The U.S. had to survive an extended 11 minutes of stoppage time following the second extra period.

In a testy match, Reyna scored the first U.S. goal and had been subbed off when appeared to be hit on the face by an object thrown from the stands following Pulisic’s goal. The match had been halted for about three minutes during second-half stoppage time because of discriminatory chants at Empower Field.

Jesús Corona put Mexico ahead 63 seconds in after a sloppy giveaway by McKenzie, who made a poor pass in his own penalty area right into the path Corona, who dribbled in alone on Steffen and sent an angled shot over the goalkeeper’s right shoulder for his ninth goal. It was the earliest goal conceded by the U.S. since at least 1990.

Mexico appeared to go up 2-0 in the 24th minute when Héctor Herrera played a short corner kick to Lozano, who gave the ball back, and Herrera made a long cross that unmarked Héctor Moreno headed in. After a brief delay for the video review, the goal was disallowed for offside.

Reyna scored his third international goal when Pulisic’s corner kick was headed by McKennie off the far post and bounded in front of the goal, where Reyna kicked it in from about 4 yards with his left foot. He followed his father, who scored against Mexico in a 4-0 exhibition win at Washington, D.C., in June 1995.

Steffen appeared to hurt his left knee while coming out for a rolling ball and was replaced by Horvath in the 69th minute.