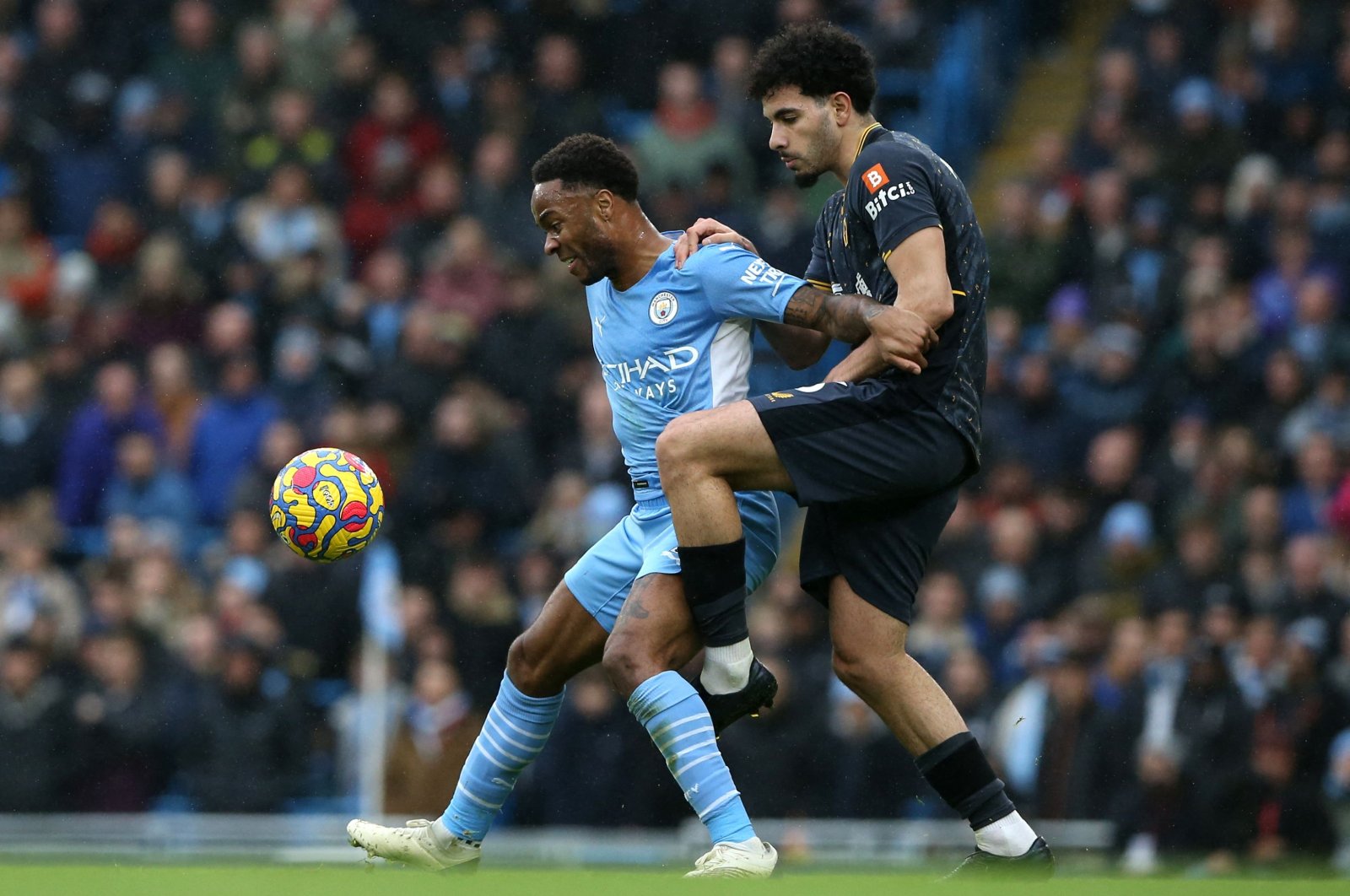 The top three teams in the Premier League points table – Manchester City, Liverpool and Chelsea – all picked up wins in respective matches Saturday to further heat up the title race in England.

The trio, however, all needed penalties to scrape the wins. Leader Manchester City beat Wolverhampton Wanderers at the Etihad thanks to a Raheem Sterling spot kick after a controversial penalty award.

Liverpool also won by a single goal against Aston Villa, managed by former Anfield favorite Steven Gerrard, with the visitors upset at the decision to award a penalty when Mohamed Salah went down in the box before converting the 67th-minute winner.

Chelsea midfielder Jorginho scored twice from the spot, including a stoppage-time winner, as Thomas Tuchel's side beat Leeds United 3-2 at Stamford Bridge.

Wolves had limited City in the opening period before their striker Raul Jimenez's dismissal for two yellow cards, in quick succession in first-half stoppage time, shifted the odds against them.

City dominated from then on, edging in front through Sterling's penalty – a decision that required a lengthy VAR (video assistant referee) check – in the 66th minute with the ball striking Joao Moutinho.

Referee Jon Moss ruled the ball had hit the Portuguese midfielder's arm and although the television images suggested it had struck him in the upper ribs, VAR backed the on-field decision.

Down the East Lancs Road at Anfield was a surprisingly low-key reception for Gerrard, the Liverpool-born former captain and Champions League winner, before a game where his Villa team set about frustrating the home side.

Liverpool dominated the first half with Villa keeper Emiliano Martinez doing well to save efforts from Andy Robertson and Salah.

After the break, Martinez produced a brilliant reflex stop to keep out a powerful header from Virgil van Dijk but Liverpool's pressure finally paid off when Salah went down in the box under a challenge from Tyrone Mings.

The Egyptian fired home an unstoppable spot-kick to secure the win for Juergen Klopp's side.

"We've lost to a soft penalty because if you watch it properly, Tyrone's been fouled first," said Gerrard.

"The disappointing thing is that the referee hasn't gone to look at it," he added.

Chelsea could ill-afford another slip-up, after last week's loss at West Ham United but it was pushed all the way by Leeds, before ending up with a 3-2 home win.

Leeds went ahead against the run of play in the 28th minute when Daniel James went down under a challenge by Marcos Alonso to win a penalty that Brazilian playmaker Raphinha stroked home.

But the Blues clawed their way back into the game when Alonso, trying to atone for his earlier error, stole the ball from Stuart Dallas, exchanged passes with Timo Werner and crossed for Mason Mount to score with a first-time angled shot.

Tuchel's men turned the game around when referee Chris Kavanagh, after a VAR check, awarded them a penalty after a Raphinha challenge on Antonio Rudiger and Jorginho fired high into the net.

Chelsea was then caught out in the 83rd minute when 19-year-old Joe Gelhardt, barely on the field as a substitute, connected with a Tyler Roberts cross to score his first league goal.

But just when the Blues looked like they had slipped further behind in the title race, Rudiger went down under a challenge by Mateusz Klich and Jorginho slotted home.

Arsenal weathered storms on and off the pitch before coasting to a 3-0 Premier League win over Southampton as boss Mikel Arteta dropped captain Pierre-Emerick Aubameyang from the match-day squad for disciplinary reasons.

Southampton was on top in the early stages but the Gunners broke through in the 21st minute with Alexandre Lacazette finishing off a sweeping break.

Goals from midfielder Martin Odegaard and defender Gabriel made sure of the win for Arsenal, who is fifth on 26 points.

Manchester United, in the meantime, scraped to a 1-0 win at Norwich City. Cristiano Ronaldo converted from the spot a 75th-minute penalty to give new boos Ralf Rangnick a second win.

The result lifted United to fifth place in the standings on 27 points from 16 games, behind fourth-placed West Ham United on goal difference, while Norwich stayed bottom on 10 points.