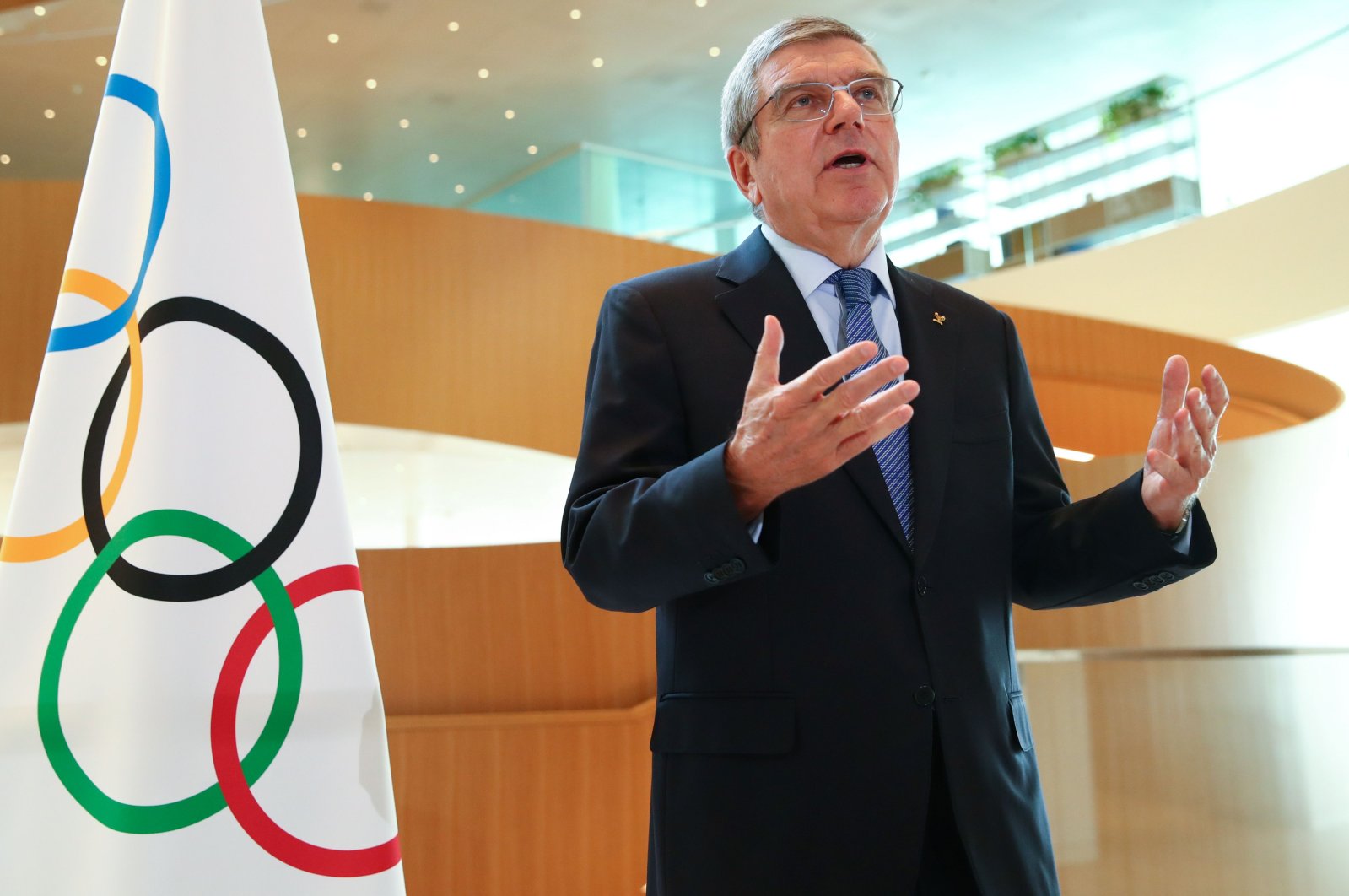 International Olympic Committee (IOC) President Thomas Bach gestures as he speaks during an interview after the historic decision to postpone the 2020 Tokyo Olympic Games due to the coronavirus pandemic, in Lausanne, Switzerland, March 25, 2020. (AFP Photo)
by ASSOCIATED PRESS Jul 17, 2020 6:53 pm
RECOMMENDED

Bach seems certain to get four more years in 2021 after almost half of the 100 IOC members from around the world praised him in an online version of their annual meeting.

"As you can imagine, I could hear this forever,” Bach quipped during nearly a full hour of tributes to his leadership since his eight-year first term started in 2013, and from members welcoming his candidacy for the second term.

Bach’s first term was marred by the Russian doping scandal but it has been a financially stable period for the IOC. American broadcaster NBC signed a long-term rights deal and new top-tier sponsors were added, including Chinese retail giant Alibaba.

The Beijing Winter Olympics, currently scheduled for February 2022, will be an early highlight and a potential test of Bach’s second and, according to current IOC rules, final term in office.

Although serious talk of a boycott has not begun, China’s human rights record is an expected target ahead of the Olympics. Some lawmakers and diplomats have criticized China for its detention and treatment of its Muslim minority Uighur people and pro-democracy activists in Hong Kong.

"Boycotts and discrimination because of political background or nationality are once again a real danger,” Bach warned in his keynote speech in Lausanne, Switzerland. "A sporting boycott only punishes the athletes of the boycotting country and deprives their people of sharing in the success, pride and joy of their Olympic team.”

The issue is personal for Bach, who won a gold medal in team fencing at the 1976 Montreal Olympics but could not defend the title when West Germany joined the United States and others in refusing to send teams to the 1980 Moscow Games.

"The Soviet army stayed nine long more years in Afghanistan after the boycott,” said Bach, who as an athlete spokesman in 1980 failed to change the minds of German political leaders. "It appears that today, some just do not want to learn anything from history."

"The only political effect the boycott of 1980 had, was to trigger the revenge boycott of the following (Los Angeles) Olympic Games,” he said.

If Bach is re-elected unopposed as expected, a big challenge of his next term is likely to be the economic and social recovery of sports from the global health crisis.

In March, the IOC postponed this year's Tokyo Olympics for one year. Organizers confirmed Friday they had secured all the venues and the Athletes Village for next year. IOC members on Friday also ratified postponing the 2022 Dakar Youth Olympics in Senegal to 2026.

"Unfortunately, we are already seeing clear signs in some parts of the world that ... society and nations are driven by even more egoism and self-interest,” Bach said. "This leads to more confrontation and to the politicization of all aspects of life: culture, economy, health, science, humanitarian aid. Even the fight against doping is already being targeted.”

That comment appeared to criticize the U.S. after a government-funded study last month raised the possibility of withholding money from the World Anti-Doping Agency.

The IOC said its presidential election will be in "spring 2021” as members agreed to have two full meetings next year. The second is due to be in Tokyo on the sidelines of the Olympics.

Two members, John Coates of Australia and Ser Miang Ng of Singapore, were elevated to IOC vice president status, with seats on the executive board.

Two vacant seats on the 15-member board were won in elections by Mikaela Cojuangco Jaworski of the Philippines and Gerardo Werthein of Argentina, one of Bach’s main allies.