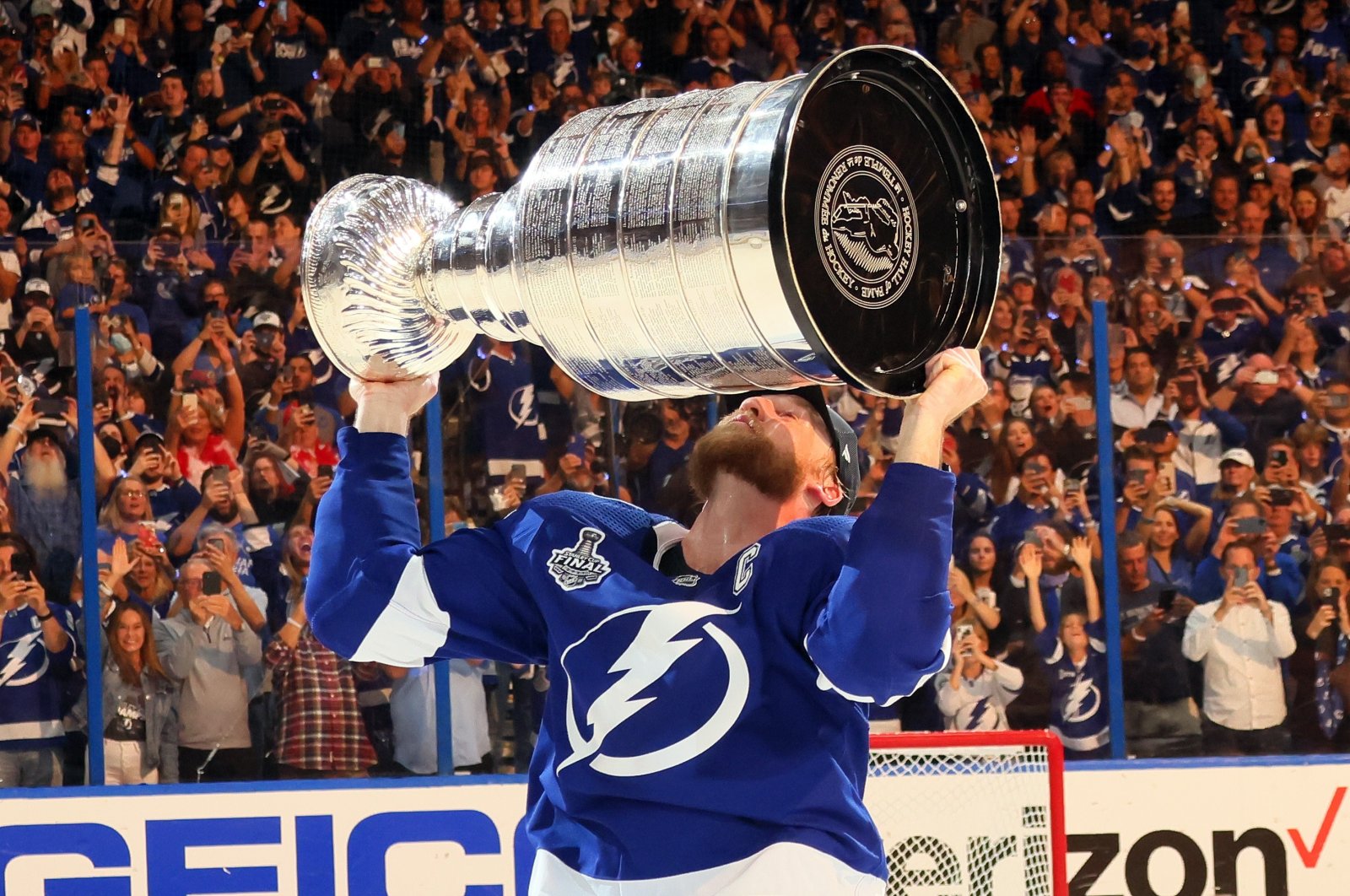 Steven Stamkos of the Tampa Bay Lightning hoists the Stanley Cup after the 1-0 victory against the Montreal Canadiens in Game 5 to win the 2021 NHL Stanley Cup Final at Amalie Arena, Tampa, Florida, July 7, 2021. (AFP Photo)
by Associated Press Jul 08, 2021 8:45 am
RECOMMENDED

The Tampa Bay Lightning sealed a 1-0 win over the Montreal Canadiens in Game 5 of the Stanley Cup Final to win their second consecutive Stanley Cup, delivering a third major championship to the city in less than a year as their feat bookended a Super Bowl victory by Tom Brady and the Buccaneers.

A raucous crowd of 18,110 packed Amalie Arena, while thousands more gathered on a plaza outside the building to celebrate after being forced to follow the team’s entire 2020 NHL playoff run from afar due to the coronavirus pandemic.

“It’s out of this world," defenseman Victor Hedman said. "Winning a Stanley Cup is one thing. But doing it in front of our fans, family means the world.”

The NFL’s Buccaneers became the first team to win a Super Bowl played in its home stadium in February, with a largely pro-Tampa Bay crowd of 24,385 cheering Tom Brady to a record seventh NFL title.

The latest celebration comes just five months after the Bucs beat the Kansas City Chiefs for their first championship in 18 years.

The region actually had a shot at a fourth title in the past year. Major League Baseball’s Tampa Bay Rays won the American League pennant, but lost the World Series to the Los Angeles Dodgers in six games while making most of its playoff run in MLB bubbles set up in San Diego and Arlington, Texas.

Quieting the din inside Amalie Arena for just a moment, Gary Bettman looked over to the Tampa Bay Lightning and reached back into the dark days of the pandemic perhaps one last time.

The NHL commissioner beckoned not just captain Steven Stamkos but the entire team over to touch, kiss and hoist the Stanley Cup as champions once more. It was a far cry from the tradition of presenting hockey's holy grail to the captain to take back to his team, and the Lightning sent out another pandemic hockey season like they did the last – by winning their second championship in 10 months.

It was a familiar sight for the back-to-back champions, even if it was different in every possible way.

After the Lightning beat the Montreal Canadiens 1-0 on Wednesday night to end the final in five games, Stamkos hoisted the Cup in front of 18,110 fans – 18,110 more than the last time he did back in September.

Pyrotechnics went off around him to celebrate not only Tampa Bay winning during a pandemic once again but the end of another grueling season played against the backdrops of protocols, restrictions and heartbreak. As Stamkos took another lap with the Cup, players held up their phones to capture video of the fans, the confetti and the joy of being able to really, truly celebrate.

“Full arena, incredible energy and another championship in Tampa,” Bettman said. “It feels like things are normal.”

Winning has become normal for the Lightning, who did so this time relying on their playoff MVP goaltender, Andrei Vasilevskiy, and the only two Tampa Bay players on the ice without their names on hockey's holy grail.

Vasilevskiy had a series-ending shutout for an NHL-record fifth consecutive time dating to the 2020 final. Finishing with a handful in a frantic final minute, he made 22 saves to remain undefeated in games after a loss over the past two playoffs, both of them won by Tampa Bay in the pandemic.

“It’s so hard to win the Stanley Cup,” Stamkos said. “And then you do it two years in a row, you deserve to go down in history.”

Ross Colton and David Savard weren’t around last year and made sure to put their stamp on Tampa Bay’s latest title run. Savard set up Colton’s goal midway through the second period past Canadiens stalwart Carey Price and the packed crowd roared.

“To do it in front of our fans and our families, it’s so special, special,” defenseman Victor Hedman said. “It’s out of this world."

The scene couldn't have been any further from the mirthless, empty arena where the Lightning won the Cup last September in a quarantined bubble across the continent in Edmonton, Alberta. Tampa Bay joined Pittsburgh as the only back-to-back Cup winner in the salary cap era, but even more impressively did it in the shortest span between championships in the long history of the NHL.

Never losing twice in a row thanks to Vasilevskiy's brilliance and one of the deepest rosters constructed since the cap was implemented in 2005, the Lightning solidified their status as a modern-day dynasty.

How deep? Nikita Kucherov had 32 points to join Mario Lemieux as the only players to lead the postseason in scoring two years in a row, and Brayden Point scored 14 goals through three rounds. Kucherov, Point and Hedman all played through injuries, too.

It was just too much for the Canadiens, who relied again on Price to keep them in a game – and the series. He finished with 29 saves.

The sunbelt franchise in a nontraditional market that didn't even exist until 1992-93 went through the NHL's most storied franchise to win this one. The third championship in franchise history denied Montreal a 25th league championship banner.

Tampa Bay's mayor had suggested the Lightning lose Game 4 on the road so they could win at home, and she got her wish as coach Jon Cooper's team became the first since Chicago in 2015 to hoist the Cup on home ice.

“We didn’t get a chance to do that last year,” Stamkos said. “This is redemption for them to be able to spend this time with us. We wanted to win in Game 4. It didn’t work out. Maybe it’s a blessing in disguise we got to do it front of our amazing fans.”

The Canadiens ran out of gas in what was a surprise playoff run for a team that opened the postseason with the worst record of the 16 qualifiers.

“The resilience that we showed: just a good team to be a part of," Montreal’s Brendan Gallagher said. “As painful as this is right now, sometimes you need to feel this to call yourself the champion."

The Lightning know that well. Their back-to-back title run was spurred by the adversity of the team overcoming the shock of getting swept by Columbus in the first round of the 2019 playoffs.

Tampa Bay was without veteran forward Alex Killorn, who broke his left fibula blocking a shot in Game 1 of the final, had surgery last week and still wanted to play. He joined his teammates for a celebration like last year but unlike it in every way.

“It’s like we won two completely different Stanley Cups, and that’s what makes it extremely special for us,” coach Jon Cooper said. “You do one without fans and then you do one in your own building: We couldn’t have written the script any better.”