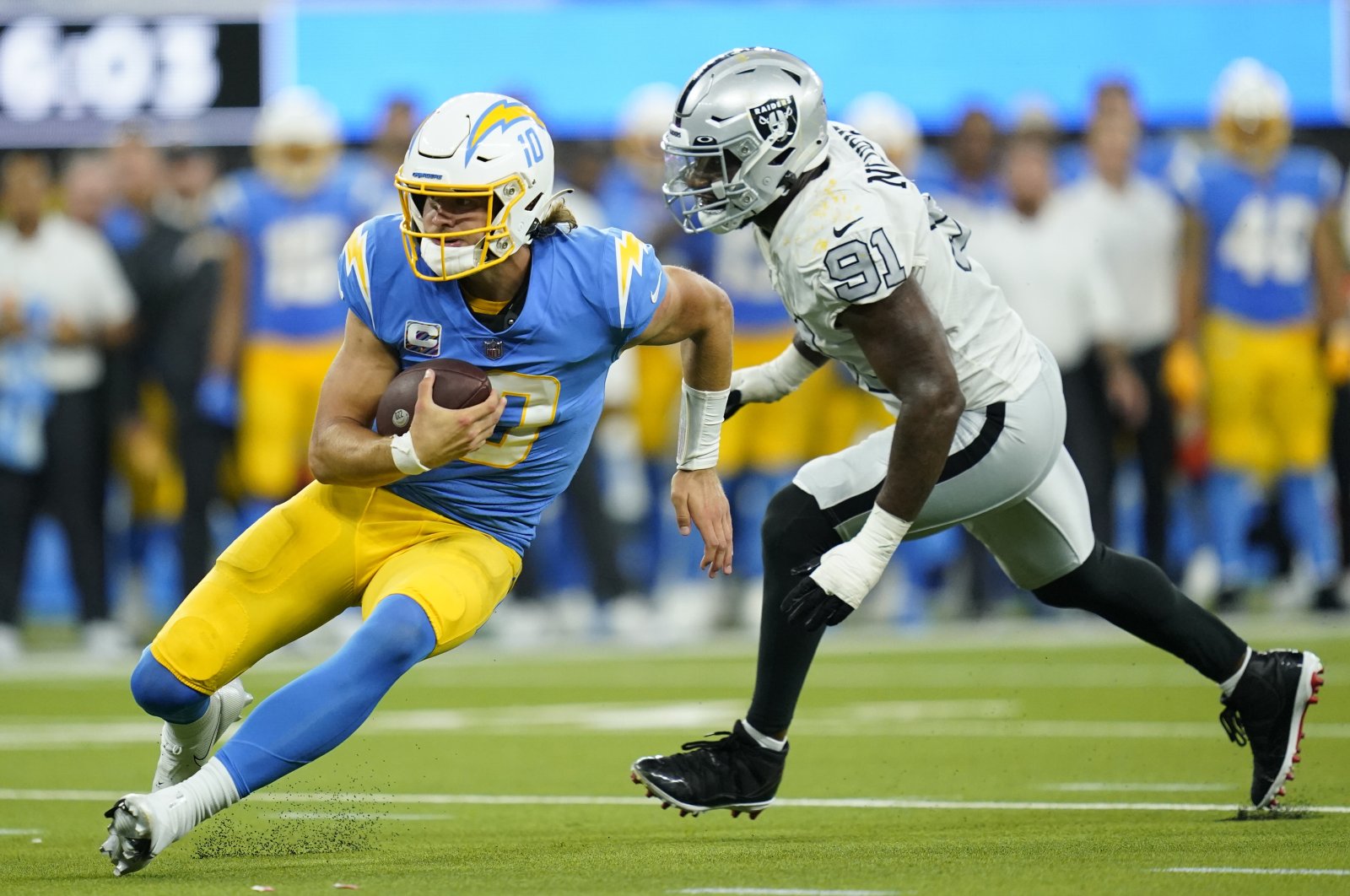 Playing under the Monday night lights for the second time in the first month of the NFL season, the Las Vegas Raiders were unable to conjure up their previous magic, falling from the ranks of the unbeaten after losing 28-14 to the Los Angeles Chargers.

Justin Herbert threw for three touchdowns, Austin Ekeler rushed for a career-high 117 yards and scored twice to lead Los Angeles to a 3-1 start for the first time since 2014 and put it as part of a three-way tie atop the AFC West with Las Vegas and Denver. The Raiders' loss means the Arizona Cardinals are the NFL's lone undefeated team after four weeks.

Chargers first-year coach Brandon Staley was pleased with his team's offensive balance as well as staying within the game plan. Los Angeles had the ball for nearly 35 minutes with three of their four scoring drives going nine plays or more.

“We stayed patient, I thought we had a good mix of the run and pass. Justin was extremely patient tand Austin came alive tonight,” he said..

Herbert, who completed 25 of 38 passes for 222 yards, accounted for all of his TDs in the first half as the Chargers built a 21-0 halftime lead. The Raiders scored on their first two possessions of the second half to draw within a touchdown, but Ekeler gave Los Angeles some breathing room with an 11-yard run off left guard. Herbert had the key play of the drive with a 13-yard completion to Jared Cook on fourth-and-2 from midfield.

Herbert achieved a pair of milestones in the win. He completed his 500th pass in his 19th start, becoming the first quarterback in the Super Bowl era to reach that before his 20th start. He has accounted for 10 touchdowns in his first three prime-time games, tying Patrick Mahomes and Dan Marino. It was definitely a weekend for quarterbacks, as Tom Brady became the NFL's all-time passing leader in his return to New England.

Ekeler, who had 145 total yards, also had a touchdown reception in the second quarter.

Derek Carr was 21 of 34 for 196 yards with two touchdowns and an interception. The Raiders could manage only 48 yards rushing against a Chargers defense that was last in the league in run defense.

“We cannot come out and take that many punches in the first round. I’m proud of our guys showing a toughness to get up and keep fighting, but that was ridiculous tonight,” Raiders coach Jon Gruden said. “They got on us and they got after us in all three phases, and we found a way to make it a football game and give ourselves a chance, but it’s just too hard in this league against good teams.”

The Chargers took the opening kickoff and went 75 yards in 12 plays. Herbert completed all six of his passes on the drive, including a 4 yard bullet to tight end Donald Parham in the back of the end zone to put them on top 7-0.

Los Angeles extended its lead to 21-0 at halftime by scoring on the final two drives of the first half. Herbert's 10-yard TD to Cook was set up by a 41-yard completion to a wide open Stephen Anderson to the Raiders 12 three plays earlier.

After the Raiders went three-and-out, Herbert led the Chargers on a nine-play drive. He completed his last five passes, including a 14-yard screen to Ekeler for the score.

Las Vegas was held to one first down and 51 net yards in the first half, but made adjustments at halftime and scored on its first two possessions of the second half. The Raiders took the third-quarter kickoff and scored when Carr found Hunter Renfrow for a 10-yard touchdown.

Darren Waller then drew Las Vegas within a TD when he caught a 3-yard pass with 1:44 remaining in the third.

The Chargers Hollywood Park home has a roof over it, but the start of the game was delayed 35 minutes due to lightning strikes in the area. SoFi Stadium is classified as open-air due to the north side being open on the upper deck. Torrential rain hit the Los Angeles area nearly an hour before kickoff.

“I've never had an indoor stadium with a lightning delay. This is a bizarre night for all of us,” said Gruden, who added he didn't receive an explanation for the delay.

Joey Bosa recorded his 50th career sack during the first quarter when he brought down Carr for a 9-yard loss and forced a fumble that ended up being recovered by Las Vegas guard John Simpson.

Bosa, who is in his sixth season, reached it in 67 career games, faster than any Chargers player since sacks were kept as an official stat in 1982.