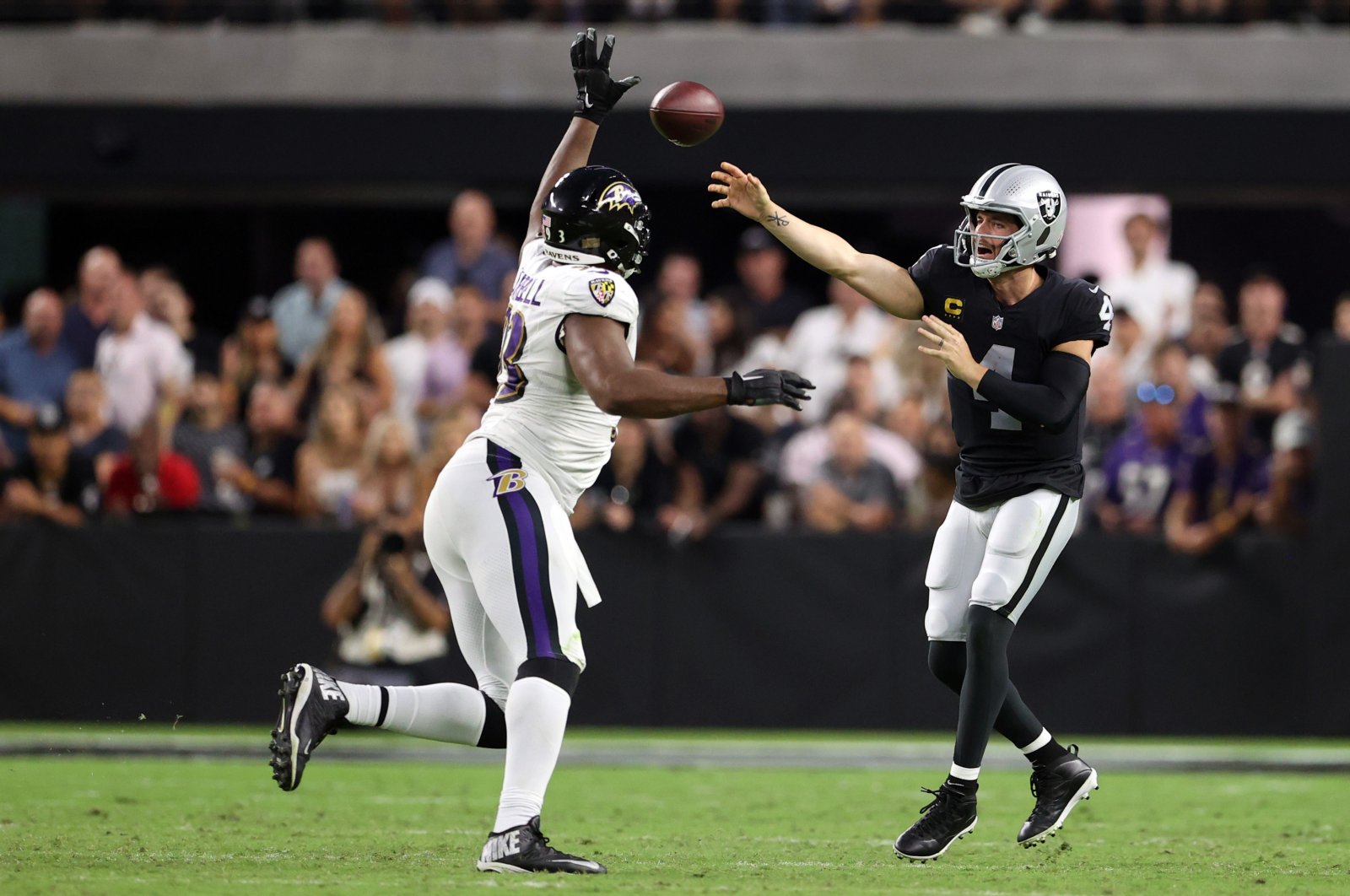 The Las Vegas Raiders gave hungry fans an extra helping of football by taking the game to overtime before finally clinching victory under the Monday night lights, ending the first week of the NFL much like it began, with a closely fought contest.

Derek Carr lofted a 31-yard touchdown pass to a wide-open Zay Jones with 3:38 left in overtime to give the Raiders a wild 33-27 victory over the visiting Baltimore Ravens.

The winning score came two plays after Carl Nassib forced a fumble by Lamar Jackson, and Darius Philon recovered at the Baltimore 27.

Las Vegas, which won the toss to start overtime, appeared to win the game earlier in overtime when Carr hit Bryan Edwards with a 33-yard pass up the right sideline that was ruled a touchdown on the field. The call was reversed following a replay review that showed that Edwards' knee hit the ground before he extended the ball over the goal line.

Carr was then stopped on a sneak, and after rookie right tackle Alex Leatherwood picked up a 5-yard false start penalty, Carr's pass intended for Willie Snead was deflected and intercepted in the end zone by Anthony Averett.

Carr completed 34-of-56 passes for 435 yards and two touchdowns and an interception for Las Vegas (1-0) which was playing a regular-season game with fans for the first time in the $1.9 billion Allegiant Stadium and an announced crowd of 61,756.

Darren Waller finished with 10 catches for 105 yards and a touchdown while Josh Jacobs, hampered by a toe injury, rushed for 34 yards and two touchdowns. Daniel Carlson kicked two field goals, including a career-best 55-yarder with two seconds left in regulation to force overtime.

Baltimore took a 24-17 lead on an 8-yard touchdown run by Latavius Murray with 6:04 left in the fourth quarter. The touchdown came one player after Jackson connected with Sammy Watkins for a 49-yard completion.

But Carr, connecting on six-of-eight passes for 85 yards, drove the Raiders to the tying touchdown, hitting Waller with a 10-yard touchdown with 3:44 to go.

Tucker appeared to win it for the Ravens when he connected on a 47-yard field goal with 37 seconds left.

Instead, Carlson tied it with his 55-yarder with two seconds left. It came after Carr hit Edwards, who hadn't caught a pass the entire game, for completions of 20 and 18 yards.