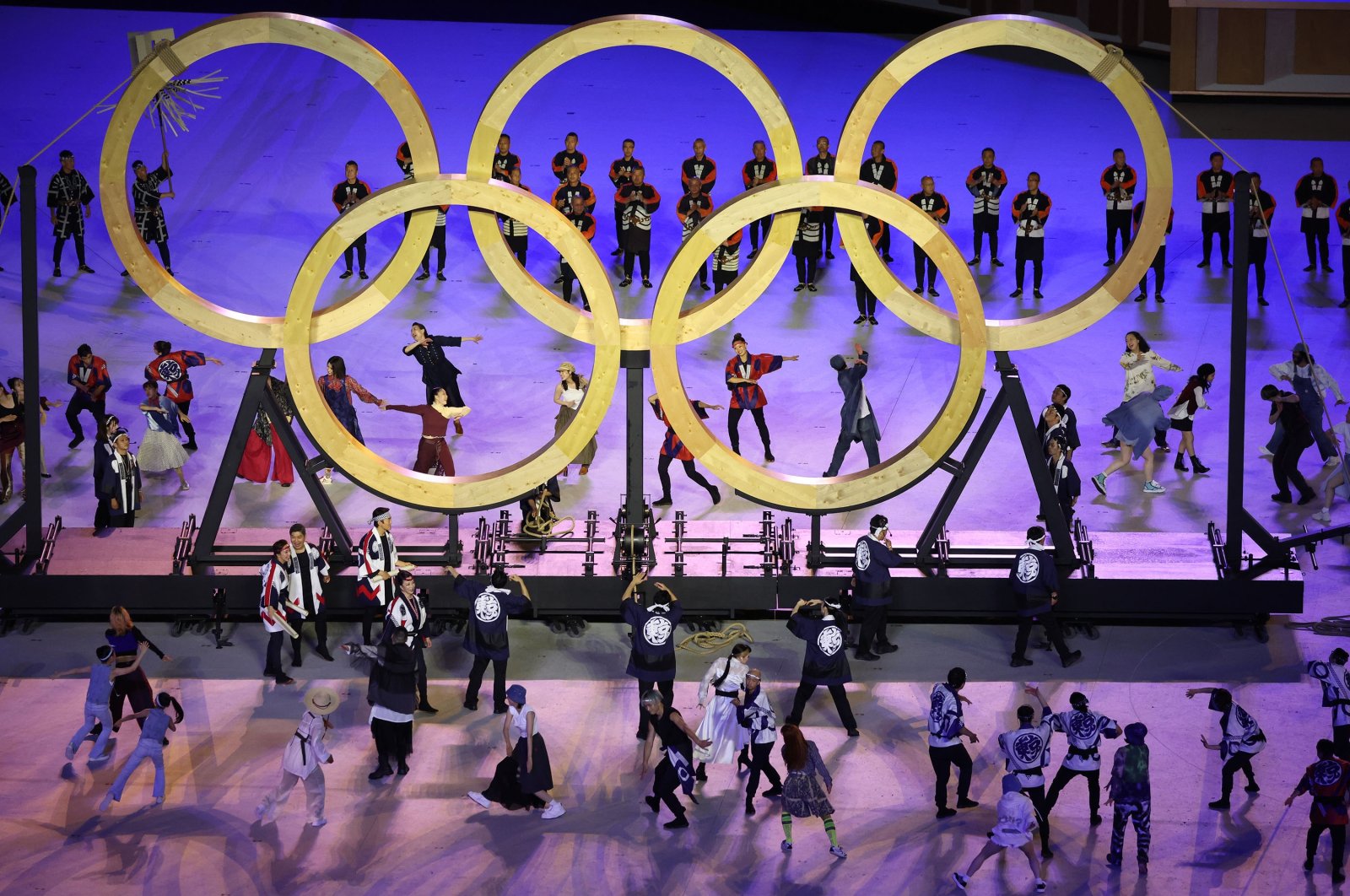 Performers are seen with the Olympics rings during the opening ceremony of the Tokyo 2020 Olympic Games, at the Olympic Stadium, in Tokyo, Japan, July 23, 2021. (Reuters Photo)
by Agencies Jul 23, 2021 2:20 pm
RECOMMENDED

The most troubled Olympics in modern history finally opened in Tokyo on Friday, struggling to shake off lingering virus fears after a one-year postponement and a buildup marred by scandal and controversy.

Postponed for a year, organizers were forced to take the unprecedented step of holding the Games without fans as the coronavirus is on the rise again, taking lives around the world.

Even the opening ceremony – normally a star-studded display teeming with celebrities – was eerily silent, with fewer than 1,000 people in attendance, strict social distancing rules and signs calling on the spectators to "be quiet around the venue."

Regardless, it marks a coming together of the world, with an audience of hundreds of millions around the globe and at various stages of the pandemic tuning in to watch the start of the greatest show in sport.

The opening video featured at the stadium recapped Japan's path to Tokyo 2020 and the challenges the world has faced since the selection of the Japanese capital as host in 2013.

It showed how in 2020 the coronavirus struck, with lockdowns forcing the unprecedented postponement only four months before the Games were supposed to open, setting off a roller-coaster period of uncertainty and preparations in isolation for the athletes.

Some of them are expected to use the ceremony to make statements about equality and justice, and several nations will be represented by a man and a woman after the organizers changed their rules to allow two flagbearers.

Japan had billed the Olympics as an echo of the 1964 Tokyo Games, which marked the country's return to the world stage after its devastating World War II defeat, but this time showcasing its recovery from the 2011 earthquake, tsunami and nuclear crisis.

In the segment highlighting the impact of the pandemic on the athletes and people around the world unable to see the Olympics in person, the organizers showed a lone female athlete, Japanese boxer nurse Arisa Tsubata, training in the darkness, running silently on a treadmill.

Dozens of dancers moved about while projection mappings showed connections between them, highlighting how people around the world, including the athletes, have formed fresh connections online during the lockdown.

Japanese Emperor Naruhito and International Olympic Committee (IOC) President Thomas Bach, both masked, entered the stadium and bowed to each other before sitting down socially distanced.

The giant wooden rings were carried onto the field on a platform, guided by the light of many paper lanterns. With the pull of a rope, the rings were transformed into the Olympic symbol.

The rings make use of lumber from thinned trees that grew from the seeds borne by athletes from each of the participating nations to the previous Olympics hosted by Tokyo.

The performance of putting the rings together began with the "Kiyari Uta," a traditional work song that has been sung for centuries by laborers to synchronize their efforts in a rhythmic spectacle.

The opening is taking place without the usual mass choreography, huge props and cornucopia of dancers, actors and lights associated with past celebrations.

A vastly smaller number of athletes will march in the teams' parade, with many planning to fly in just before their competitions and leave shortly after to avoid infections.

Only 15 global leaders are in attendance, along with Emperor Naruhito and U.S. First Lady Jill Biden.

The ceremony is marked by high-profile absences, including former Prime Minister Shinzo Abe, who wooed the Games to Tokyo. But in a sign of how divisive the games remain, several top sponsors including Toyota and Panasonic did not send executives.

A few hundred protestors demonstrated against the games on Friday morning near the Tokyo government building where Governor Yuriko Koike welcomed the Olympic flame.

"Even though the pandemic continues, we will hold a safe and secure Games," Koike said.

"We are determined to see it through. Today is the first step towards that."

Tokyo is battling a surge in virus cases, and is under emergency measures that mean bars and restaurants must shut by 8 p.m. and cannot sell alcohol.

Only a third of the nation has had even one dose of a vaccine, prompting worries the Games could become a super-spreader event. More than 100 people involved with the Olympics have already tested positive.

The pandemic has not been the only hiccup in preparations though, with scandals ranging from corruption during the bidding process to plagiarism allegations over the design of the Tokyo 2020 logo.

The controversies kept coming right up to the eve of the games, with the opening ceremony's director sacked on Thursday for making a joke referencing the Holocaust in a video from 1998.

Back in the sporting arenas, a new generation of Olympic stars are looking to shine after a decade dominated by the likes of Usain Bolt and Michael Phelps.

U.S. swimmer Caeleb Dressel could target seven gold medals, and in track and field, 400-meter hurdlers Karsten Warholm of Norway and the U.S.' Sydney McLaughlin are among those hoping to emerge as household names.

New Olympic sports will also be on display in Tokyo, with surfing, skateboarding, sport climbing and karate all making their debut.

The Games run until Aug. 8.

About 11,000 athletes from 204 national Olympic committees are expected, along with a team of refugee athletes competing under the Olympic flag.