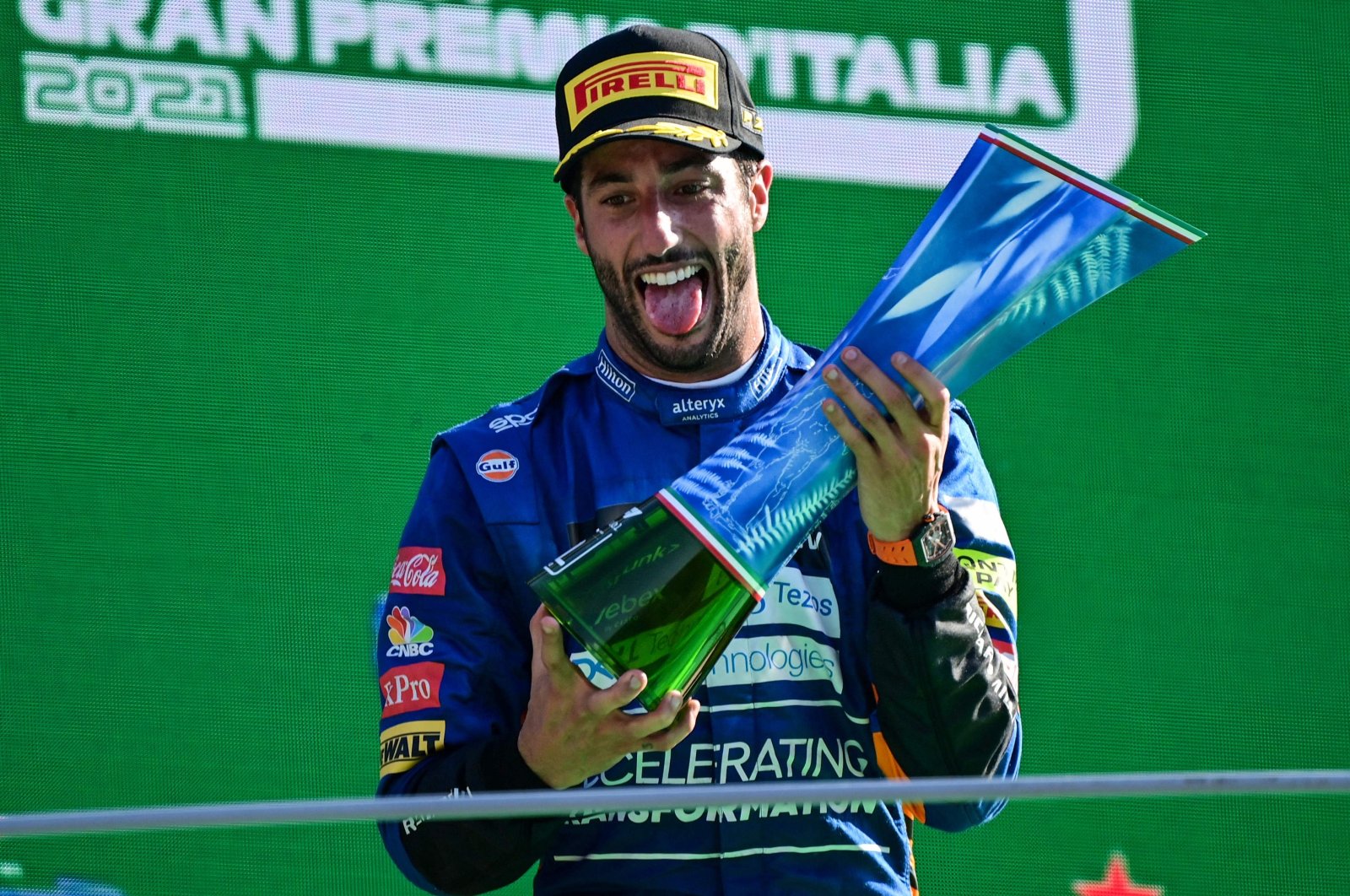 McLaren's Australian driver Daniel Ricciardo clinched the eventful Italian Grand Prix on Sunday, while championship leader Max Verstappen was penalized for a collision with title rival Lewis Hamilton that wiped out both at Monza.

The Red Bull driver, who leads his Mercedes rival by five points in the Formula One standings, must now serve a three-place grid penalty at the Russian Grand Prix in a fortnight's time.

Ricciardo had nipped past pole-sitter Verstappen at the start to lead virtually throughout with the Australian followed across the line by his McLaren teammate Lando Norris.

This was the British team's first win since 2012 and its first one-two finish in 11 years.

Ricciardo's path to his first win since Monaco 2018 was made smoother when Verstappen had tried to muscle past Hamilton, who had just rejoined the track after a pit stop.

But Verstappen's car, pushed onto the sausage kerb at the Turn One chicane, ended up with its back wheel rolling over the top of his rival's Mercedes, narrowly missing Hamilton's head.

Both drivers then slid into the gravel and were forced to retire.

In the stewards' verdict after interviewing both drivers, although Hamilton's line forced Verstappen onto the kerb, the Red Bull man had attempted the maneuver too late for him to have "the right to racing room."

Verstappen was, they said, "predominantly to blame."

Both Verstappen and Hamilton blamed each other, ahead of the stewards' inquiry.

In third in the 14th round of this fiercely contested season came Hamilton's Mercedes teammate Valtteri Bottas, who despite starting last on the grid inherited the podium spot after Sergio Perez was hit with a five-second time penalty.

Ricciardo, whose father is from Italy, greeted the fans in Italian with a huge smile on his face before drinking champagne out of his shoe in the podium celebration he has made his trademark.

"To lead literally from start to finish, I don't think any of us expected that. There was something in me on Friday, I knew something good was to come," said Ricciardo.

"To not only win but to get a one-two, it's insane. For McLaren to be on the podium it's huge, let alone one-two ... For once I'm lost for words."

The 32-year-old promised "total attack" after starting second on the grid and capitalized on the most dramatic moment of an eventful race when Hamilton reentered the Monza track from the pit lane.

Ricciardo then powered to victory backed up by his teammate Norris who was also in good spirits after an impressive second-place finish.

"We've had a pretty awesome weekend," the British driver said.

"We've been working towards this and we got a one-two finally. I'm happy for of course Daniel for getting the win."

Verstappen started the race on pole after finishing second behind Bottas in Saturday's sprint but dropped back to second at the start as Ricciardo pipped ahead.

Hamilton made an immediate move from fourth, overtaking Norris and then trying to get at Verstappen, only to finish off the track before quickly reentering back in fourth.

First Ricciardo went to the pits, giving up the lead, before Verstappen dropped back to 10th after a long pit stop on lap 23 which gave Hamilton the chance to push past Norris and take the lead.

Hamilton then pitted himself on lap 25 before clashing with Verstappen almost immediately after his exit, the two cars meeting in a chicane and then finishing in a mess at the side of the track.

With the title-chasing duo gone and chaos on the track, Hamilton's teammate Bottas, who will join Alfa Romeo next season, completed a hugely impressive weekend by finishing fourth, promoted to third after Perez's penalty.

He had started at the back of the grid despite winning Saturday's sprint race as punishment for taking on power unit components in qualifying Friday.

"Starting from the back, it's never easy," said Bottas.

"I'm glad we get more points than Red Bull, we maximized and from my side, it was good fun."