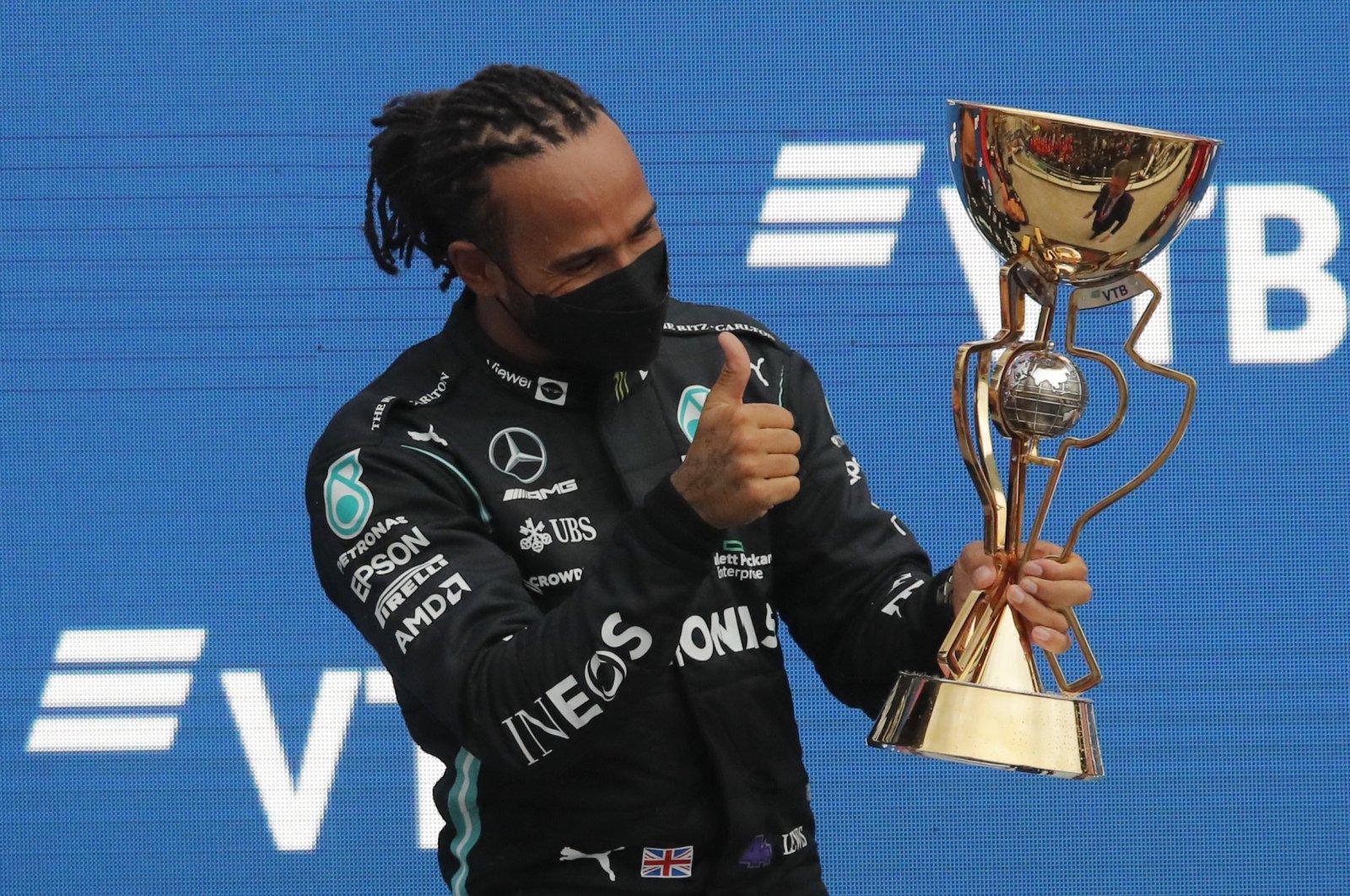 The peerless Mercedes driver emerged triumphant amid high drama at the rain-hit Russian Grand Prix to retake the championship lead.

With a late downpour causing havoc Hamilton reached the unprecedented century after being stuck on 99 since the British Grand Prix in July.

The 36-year-old Briton moved back to the top of the drivers' standings by two points from Max Verstappen, who finished second.

After taking his 100th chequered flag 14 years after his first in Canada Hamilton told his team on the car radio: "Phew. That was hard work man!"

The seven-time champion had looked destined to come away for the fifth race in a row stuck on the 99-mark with McLaren's Lando Norris firmly in command up front.

But with five laps to go, the rain that had been threatening the 15th round of the championship for so long arrived, causing mayhem.

With cars fitted with slicks starting to lose grip and coming in for intermediates, Hamilton joined them, leaving Norris leading.

But with three laps left and Norris a sitting duck and sliding all over the circuit Hamilton eventually hit the front to finally nail the magic number of victories.

After jumping out of his car he said: "The rain came, it was very opportunistic, the team did a great job, I'm grateful for the points."

"I wasn't even sure it would come. The team made such a good call at the end. I didn't want to let Lando go. I'm incredibly grateful to all these men and women here and back in the factory. Wow, 100."

Hamilton had set off from the second row after a rare mistake in qualifying 24 hours earlier.

"Going to bed last night, with the job that I did yesterday, there were subtle little mistakes. I was so determined to do the best job I could. It was tough."

At the start, as flecks of rain began to appear on drivers' visors, a ballerina pirouetted on a grand piano at the back of the grid to add a surreal touch to the occasion.

On lights out, Ferrari's Carlos Sainz won the long 900-meter sprint to the first turn from Norris and George Russell in the Williams as Hamilton slipped from fourth to seventh.

Mercedes' tactical card with Valtteri Bottas – whose engine they had replaced so he would start near Verstappen near the back of the grid and try and hold him up – worked for all of seven laps when the Dutch driver nipped past the Finn, to smug smiles from the Red Bull garage.

On lap 13 Norris took to the team radio to say "Got him" after swooping past Sainz to regain the lead he lost at the start.

Sainz pulled his Ferrari into the pits on the next lap to promote Daniel Ricciardo into second to leave McLaren racing first and second.

Approaching midway the top 10 had yet to pit, with Verstappen, up to sixth.

Ricciardo was the first of the front runners coming on for a change of rubber, but a tardy tire change saw the Monza winner rejoining back in 14th, as Hamilton took advantage of clean air to set the fastest lap.

The century-chasing man came in finally on lap 27, with Verstappen following suit, the pair dropping to ninth and 12th.

Norris came in for a slick stop, the McLaren mechanics high-fiving in relief after Ricciardo's problematic visit.

Mercedes team principal Toto Wolff took to the airwaves to tell Hamilton: "You can win this race."

With 10 laps left, Norris had regained the lead, Hamilton looming in the young Briton's wing mirror, around one second behind.

Then the rain came down.

Cars began to come in for a change of rubber for better grip including Hamilton with Norris staying out on hards, 25 seconds clear now, as McLaren gambled.

Fernando Alonso pirouetted like the prerace ballerina and Norris followed to hand Hamilton the lead, and another slice of F1 history.