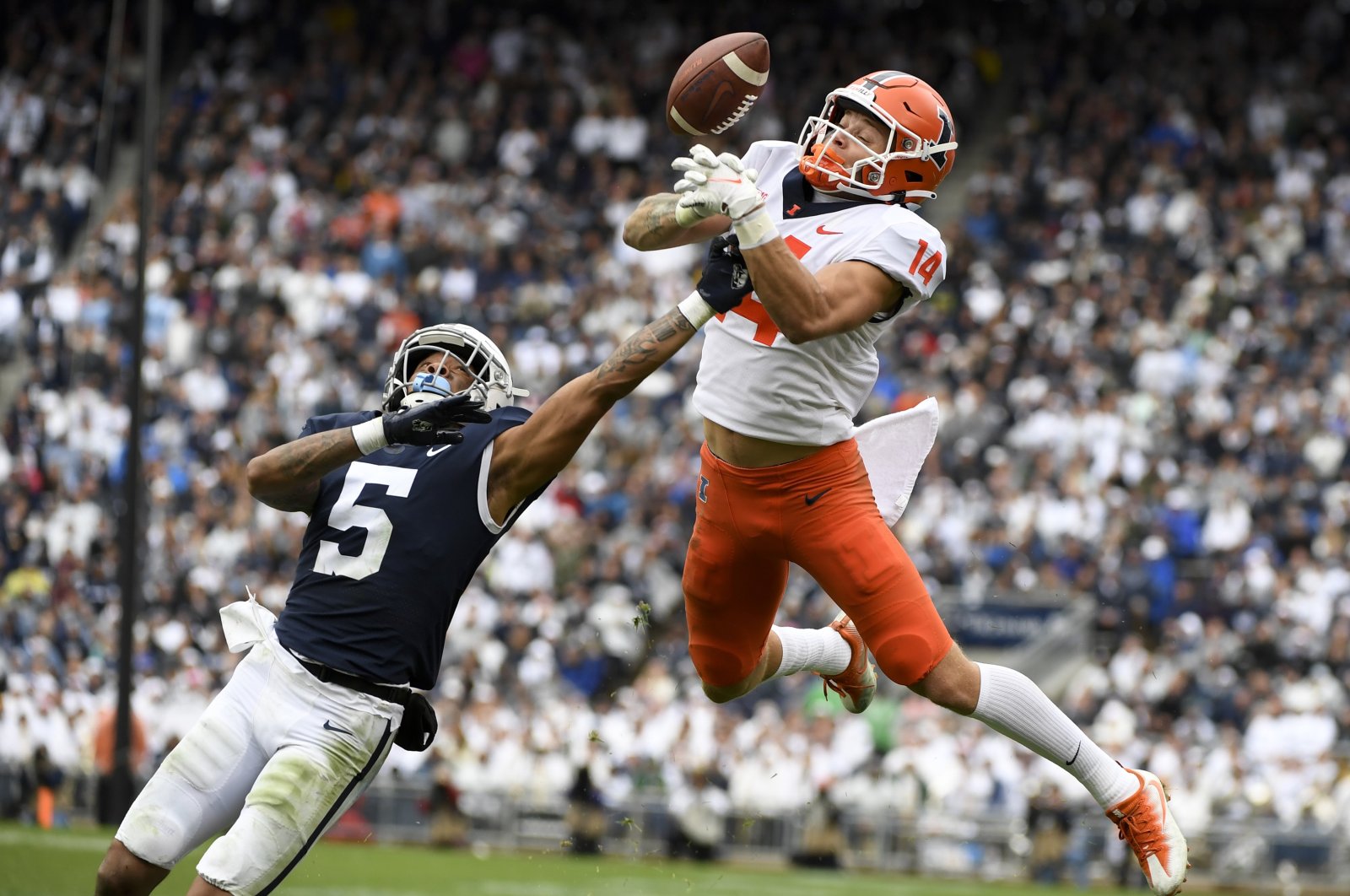 If cats really do have nine lives, the Penn State Nittany Lions used up all of theirs on Saturday and have nothing to show for it as Illinois came out on top 20-18 in the NCAA's first-ever nine-overtime game.

Over the course of the unprecedented nine overtimes, Illinois survived Penn State's botched attempt at a trick play, lost its quarterback and a powerful running back to injury, and failed to gain just three measly yards again and again.

When Casey Washington finally came down with the winning catch Saturday, he hardly knew what to do.

The sides were tied at 10 after regulation, exchanged field goals in the first two overtimes, then began to alternate one-and-done drives from the 3-yard line in the third OT as part of a format tweaked ahead of the 2021 season.

Penn State tried to win it then and there with a variation of the famed “Philly Special” play the Eagles used to win Super Bowl LII. Quarterback Sean Clifford – still suffering from an unspecified injury sustained Oct. 9 against Iowa – was wide open near the goal line on the trick play, but tight end Tyler Warren's pass attempt missed its mark.

Quarterback Artur Sitkowski missed a receiver on Illinois’ first try, and both defenses held firm for the four OTs that followed. Illinois attempted three more passes that fell incomplete, and Josh McCray was stopped at the goal line in the seventh overtime.

Meanwhile, Clifford missed his next two 2-point passes while Noah Cain was stuffed to start the fifth and seventh overtimes.

Sitkowski – normally the backup – was injured in the sixth OT and replaced by Brandon Peters, the regular starter who had been sidelined by injury. McCray, who had 142 yards on 24 carries, also left and didn't return after being pulled down and slamming his helmet off the grass.

Finally, in OT No. 8, Isaiah Williams ran one in to put Illinois up 18-16, only to have Cain keep the game alive with a 2-point run of his own.

In the ninth OT, Clifford’s pass to Parker Washington was broken up by linebacker Khalan Tolson. Peters then found Washington near the back of the end zone for the winning completion.

“I just had to hold onto it for the team,” Washington said.

When Washington caught the ball, his teammates piled on him. Others ran to center field to cartwheel or do backflips – surprising energy after a game that lasted 4 hours, 11 minutes.

The 2-point conversion shootout format was introduced in 2019, the season after LSU and Texas A&M played a seven-overtime game that left both teams badly beaten up. The rule was tweaked this year, with the 2-point conversion possessions beginning with the third overtime instead of the fifth.

Bullish backs Chase Brown and McCray blasted through wide-open holes and flanked Penn State’s defense for a combined 365 rushing yards and a touchdown and James McCourt kicked three field goals, including 39- and 32-yarders in overtime, on a soggy day at Beaver Stadium. The Illini (3-5, 2-3 Big Ten) outgained the Nittany Lions 370 yards to 207 in regulation and battled back from an early 10-0 deficit.

“To see our locker room right now is pretty special,” Illinois coach Bret Bielema said. “They fight for one another.”

KeAndre Lambert-Smith caught a touchdown pass and Jordan Stout added three field goals for the Nittany Lions (5-2, 2-2), who ran for just 62 yards and struggled to protect a banged-up Clifford.

Led by Brown’s 229 total yards, the Illini tied it 10-10 early in the fourth quarter with a 37-yard field goal from McCourt.

A sloppy fourth quarter gave way to overtime where McCourt and Stout matched each others’ kicks before a string of goal line standoffs pushed the game into unprecedented territory.

“We had other opportunities on offense, defense and special teams that we could’ve made big plays to end the game and we did not,” Penn State coach James Franklin said.

Clifford suffered an unspecified injury on Oct. 9 at Iowa and didn’t finish that game. He handled a light workload early Saturday.

The third-year starter attempted just nine passes in the first half and was slow to get to his feet after taking a sack on his first series. After two lackluster possessions and just 15 yards on seven plays, Clifford was able to rally his offense on its third try.

Led by Brown and McCray, the Illini ran the ball 12 times on a 15-play drive that ended when Brown bulled into the end zone from a yard out and cut Penn State’s lead to 10-7. Another 16-play, 70-yard drive led to McCourt's tying field goal.

Penn State was a 23 1/2-point favorite coming in and will likely fall as a result.

Illinois: The Illini were in it from the opening whistle. They used seven-man fronts and the hard-charging abilities of McCray and Brown to outmuscle Penn State’s defense nearly all day.

Penn State: Getting Clifford back perhaps sooner than they thought was great news for the Nittany Lions, especially since their running game is virtually nonexistent and they’ll need all the offense they can get with games at No. 5 Ohio State, vs. No. 6 Michigan and at No. 9 Michigan State coming up.