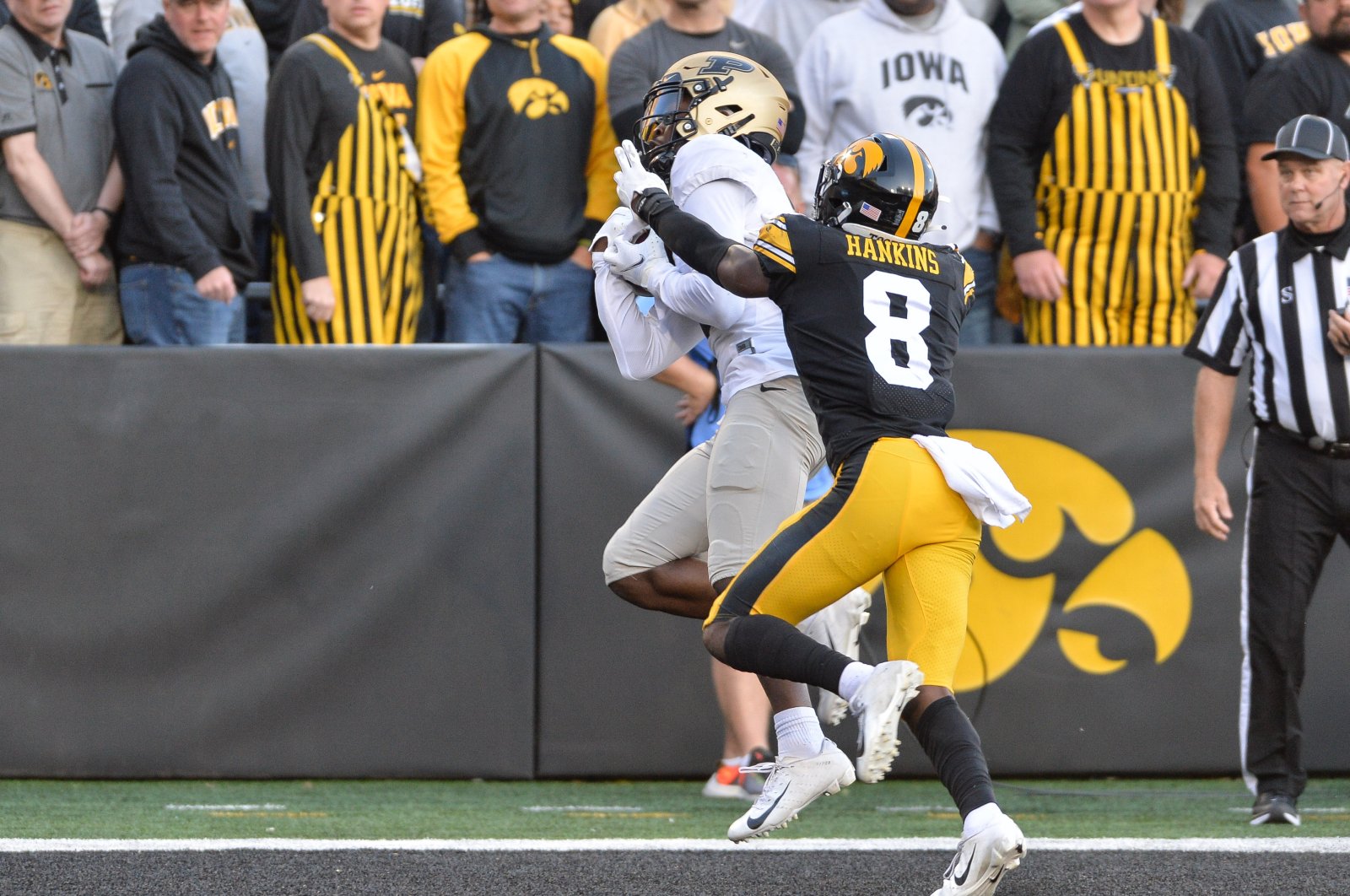 Two decades removed from the glory days of Drew Brees under center, and hardly a winning season to boast of since, the Purdue Boilermakers are rarely talked about alongside Big Ten powerhouses unless it is in the context of playing the role of spoiler. Enter Purdue versus No. 2 Iowa on Saturday.

Only the biggest Iowa fans believed the Hawkeyes 6-0 start was built on a sustainable foundation.

That doesn't mean the Hawkeyes didn't deserve their moment as the No. 2 team in the country, but it was clear at some point the Turnover Fairy would not make an appearance and a team ranked 121st in the country in yards per play (4.65) was going to need to score without a bunch of help.

Purdue rolled into Iowa City having scored only 13 points in each of its last three games, but the Boilermakers added to their rich history of giant killing by handing the Hawkeyes their first loss.

Purdue's David Bell was unstoppable with 240 yards receiving, and the Boilermakers beat a team ranked in the top two for the 13th time in school history. Nine of those have come as an unranked team. The last before Saturday was in 2018 at home against Ohio State.

The Hawkeyes are still well positioned to win the Big Ten West, but unless they can reconjure some of the magic that made them an unlikely top-five team, Iowa as a Cinderella CFP contender is not something that needs much consideration.

Georgia continued to cement itself as the clear No. 1 in the country against No. 11 Kentucky, but who's No. 2?

No. 3 Cincinnati would be the safe choice.

Don't be surprised if No. 4 Oklahoma jumps the Bearcats. Caleb Williams has the Sooners' offense clicking like a vintage Lincoln Riley attack. OU's defense is also looking vintage Riley era and that's not a good thing.

In the Southeastern Conference, the coach on the hot seat can change week to week.

Florida's man had a lot of explaining to do Saturday after the 20th-ranked Gators lost to LSU and last week's coach-in-big-trouble Ed Orgeron.

The Florida-LSU rivalry often bends toward the bizarre. In fact, it was last season's game decided by a thrown shoe that seemed to start the precipitous drop in confidence among Gators fans with their fourth-year coach.

Off a two-game losing streak, LSU (4-3) pummeled the Gators on the ground. The Tigers ran for almost as many yards (321, including 287 by Tyrion Davis-Price) as they had in their three previous games combined (327).

Florida fans have been exasperated with defensive coordinator Todd Grantham for a while, but Mullen has stood by one of the highest-paid assistant coaches in the country ($1.8 million per year).

“I don’t like to jump to conclusions," Mullen told reporters when asked about the possibility of an in-season change. "I like to have facts.”

As poorly as the Gators' defense played Saturday, there was a lot of talk about the side of the ball that is Mullen's specialty.

Why has it taken so long for Mullen to turn the offense over to Anthony Richardson?

The freshman rallied the Gators in the second half, but the damage done by the defense was too much to overcome. Richardson threw three touchdown passes and ran for a score, but did throw two interceptions.

Richardson has looked like the Gators' most talented quarterback since early in the season, but a hamstring injury kept out of a close loss to Alabama last month. He was healthy enough to play in a loss to Kentucky, but only threw one pass and ran five times while spelling Emory Jones as the Gators managed 13 points.

“I love everybody labeling people. He’s a young quarterback that’s learning and developing," Mullen said of Richardson. "That’s a good label for him.”

Starting with last season's loss to a similarly damaged LSU team, Florida has gone 2-6 against Power Five teams. The victories are against Vanderbilt and Tennessee but it does include two competitive games against Alabama, one in the SEC championship.

Georgia's ascent to juggernaut is also not making life easier on Mullen.

Still, he is 33-13 at Florida with three appearances in New Year's Six Bowls. Odds are high that even if the Gators (4-3) stumble to something like 7-5, Mullen will be safe.

The situation is way more muddled for two other coaches at programs with national championship pedigree.

Just when it looked like Scott Frost had Nebraska moving in the right direction, the Cornhuskers (3-5) lost at Minnesota in yet another game that was there for taking.

Frost is 5-17 in games decided by one possession in over four seasons at his alma mater. To get to bowl eligibility for the first time under Frost, Nebraska needs to go 3-1 against Purdue, Ohio State, Wisconsin and Iowa.

Nebraska has been torturing its fans with excruciating losses, but it might not be worse than what Miami has done lately.

The Hurricanes (2-4) let another one slip away in improbable fashion at North Carolina, leaving Manny Diaz at 16-14 in two and a half seasons leading the The U.

“There’s a really good team in that locker room,” Diaz told reporters. "We just don’t have a good record. We are what our record says we are. But there’s a good team in there. If we stay the course, it’s going to show.”

As for Mullen, all he had to do was look across the field Saturday to see how quickly things change in the SEC.

Beating Florida provided at least a temporary reprieve to Orgeron. Just two years removed from a national championship, Orgeron is going to need a few more performances from his team like it had against Florida to avoid being fired.

Combine Lane Kiffin and Tennessee and you are bound to get some mayhem.

Kiffin's return to Knoxville as Ole Miss coach was a marathon game won by the 13h-ranked Rebels. The wild affair was marked by an epidemic of injuries that may or may not have been ploys to slow down two fast-paced offenses and Tennessee fans showering the field with trash after a close spot went against the Vols late in the fourth quarter.

Kiffin is now the most entertaining man in college football. Love him or hate him, he embraces the show.

"I don’t know if I’m more excited that we found a way to win or that I didn’t get hit with the golf balls that they were throwing at me,” he told ESPN, holding up the yellow golf ball.

Williams looks like OU's next Heisman contender, but a quarterback who didn't make his first start until the seventh game is not winning the trophy ... Washington State won its third straight game, coming from behind to beat Stanford. Now the focus in Pullman becomes coach Nick Rolovich, who could lose his job if he does not comply with a vaccine mandate that covers state university employees. Rolovic has applied for an exemption. Asked whether he knew if he would still be coaching his team next week, he told reporters after the game: “I do not.” ... On Friday night, Oregon edge rusher Kayvon Thibodeaux, the potential No. 1 overall NFL Draft pick in 2022, played a dominant second half to help the Ducks hang on to beat Cal. On Saturday, Alabama edge rusher Will Anderson, the potential top pick in the 2023 draft, went off for four sacks against Mississippi State ... No. 12 Oklahoma State's defense is legit. The Cowboys held Texas to 14 yards over its final six drives to erase a 24-13 deficit and stay unbeaten ... One confounding home loss against Western Michigan has kept Pitt from getting much attention, but after crushing Virginia Tech the Panthers are the clear favorites in the ACC Coastal. And how about some Heisman hype for QB Kenny Pickett? ... All-purpose player of the day goes to Baylor linebacker Dillon Doyle. The part-time blocking and team's leading tackler ran for a touchdown, caught a touchdown pass and had a sack in a victory against No. 19 BYU ... You would have had to search for it, but Louisiana-Monroe pulled off one of the biggest upsets of the season. The Warhawks, with 65-year-old Terry Bowden in his first year as head coach, knocked off Liberty and NFL prospect Malik Willis as a 33-point underdog ... A week after UMass broke a 16-game losing streak against UConn, the Huskies snapped their 11-game losing streak against Yale ... Arizona’s losing streak hit 18 games against Colorado. The Wildcats have played half a season under new coach Jedd Fisch and have yet to score 20 points in a game ... Ohio’s Armani Rogers set a record that can never be broken, breaking off a 99-yard against Buffalo, the longest in NCAA history for a quarterback.