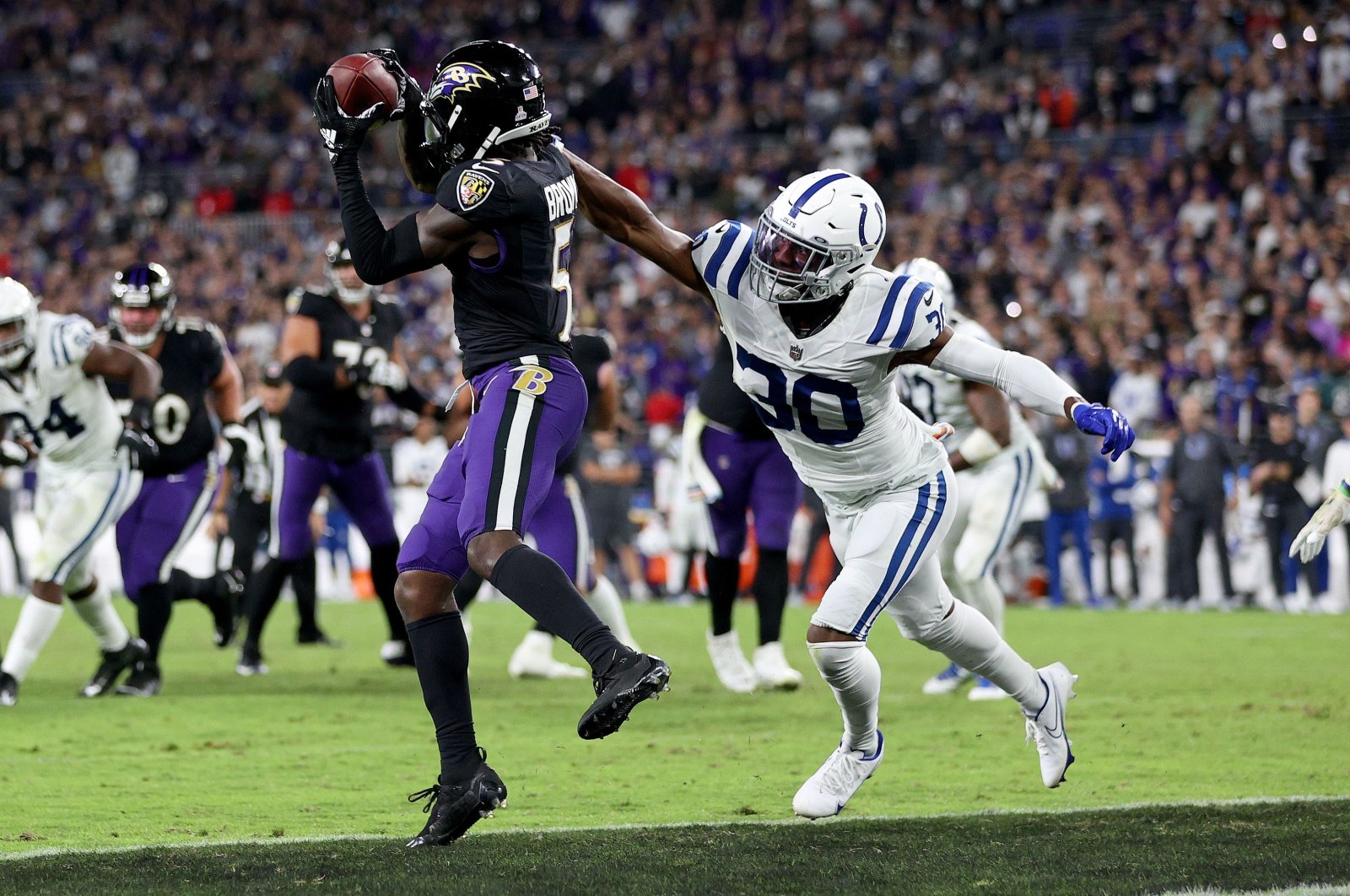 Marquise Brown (5) of the Baltimore Ravens catches the game-winning touchdown during overtime in a game against the Indianapolis Colts at M&T Bank Stadium, Baltimore, Maryland, U.S., Oct. 11, 2021. (AFP Photo)
by French Press Agency - AFP
Oct 12, 2021 7:34 am

The Baltimore Ravens apparently enjoy the spectacle of Monday Night Football, having taken both of their prime-time matchups so far this season into overtime. Unlike their first appearance, where they lost to the Las Vegas Raiders in Week 1, the Ravens came out on top over the Indianapolis Colts as Lamar Jackson threw for four touchdowns to complete a dramatic comeback and seal a 31-25 victory.

Ravens quarterback Jackson hit tight end Mark Andrews for two fourth-quarter touchdowns to tie the game and then found Marquise Brown for the winning score in overtime to complete a remarkable turnaround by the Ravens.

Baltimore, who improved to 4-1 with the victory, had trailed 25-9 early in the fourth quarter against a Colts team chasing only their second win of the season.

But the Ravens rallied, with Jackson finding Andrews with a short pass for a touchdown from five yards out.

Jackson connected with Andrews again for the two-point conversion attempt to make it 25-17.

The Colts had the chance to make it a two-score game once more on the next drive, but Rodrigo Blankenship's 37-yard field goal was blocked by defensive end Calais Campbell to deny the score.

Jackson then launched an 11-play 75-yard drive that ended with another short pass to Andrews for a touchdown.

Another two-point conversion tied the game at 25-25 with 45 seconds on the clock, but there was still time for the Colts to attempt to snatch victory.

Although Carson Wentz engineered an opportunity for a game-winning field goal, moving the Colts to the Ravens 29-yard line, Blankenship was unable to deliver, as his 47-yard attempt drifted wide left.

In overtime, Jackson had little difficulty moving the chains against a weary Colts defense, rapidly advancing 68-yards upfield before hitting Brown in the end zone from five yards for the winning score.

Jackson finished with 442 passing yards and 62 rushing yards, but the Ravens surprisingly fell short of setting a new NFL record for consecutive rushing games of 100 or more yards.

The Ravens had rushed for 100 yards or more in 43 straight games heading into Monday's clash, matching the mark set by the Pittsburgh Steelers between 1974 and 1977.

But the team were restricted to just 86 yards from 25 carries against the Colts on Monday as the streak came to an end.