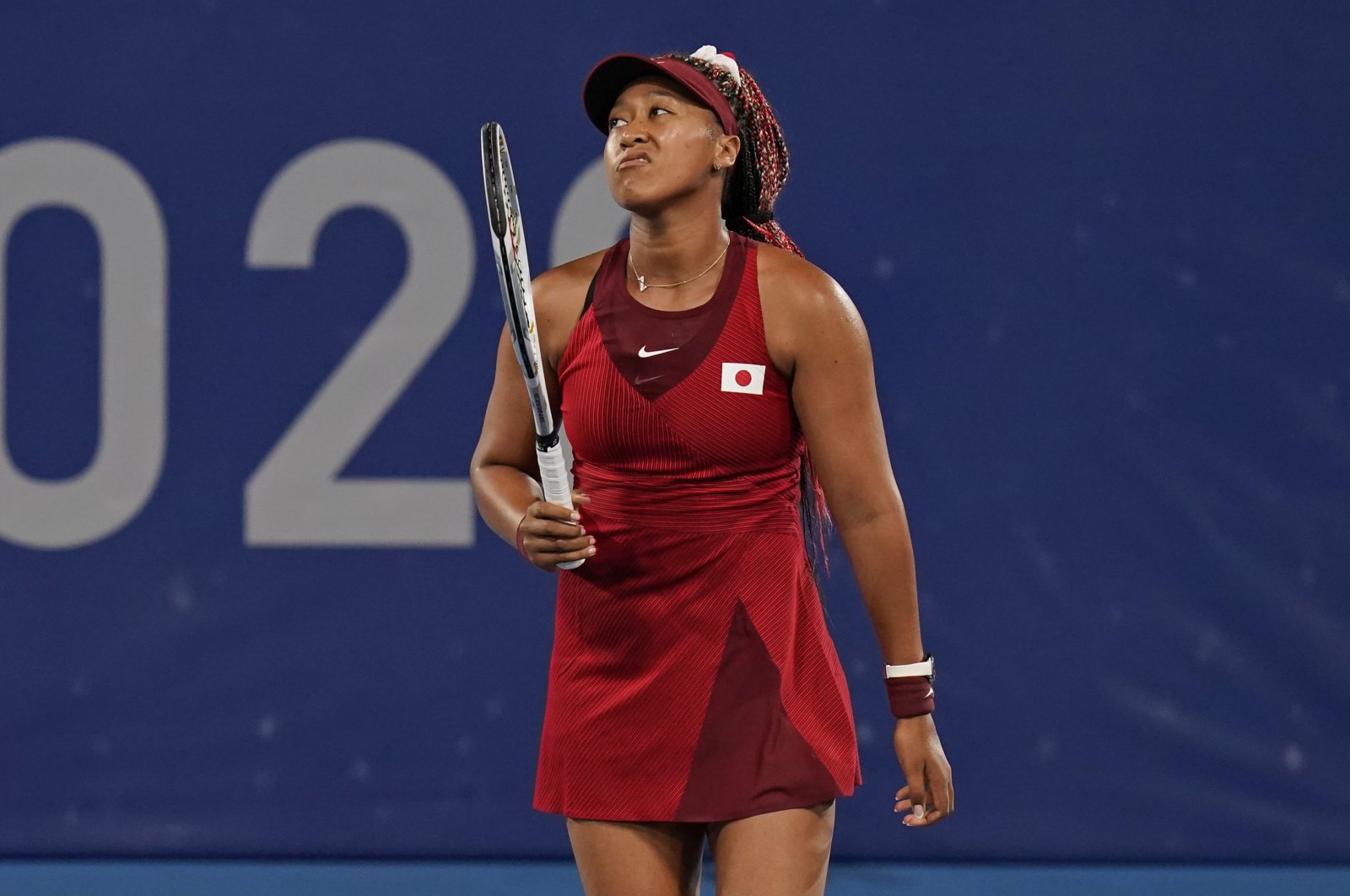 Naomi Osaka, of Japan, reacts after losing a point to Marketa Vondrousova, of the Czech Republic, during the third round of the tennis competition at the 2020 Summer Olympics, in Tokyo, Japan, July 27, 2021. (AP Photo)
by ASSOCIATED PRESS
Jul 27, 2021 8:32 am

Japan’s tennis superstar Naomi Osaka is out of the Tokyo Olympics.

Osaka lost to former French Open finalist Marketa Vondrousova of the Czech Republic 6-1, 6-4 in the third round of the Tokyo tennis tournament on Tuesday.

The second-ranked Osaka, who was born in Japan and grew up in the United States, struggled with her usually reliable groundstrokes while the 42nd-ranked Vondrousova produced a series of drop-shot winners and other crafty shots that drew her opponent out of her comfort zone.

Osaka, who lit the Olympic cauldron in Friday’s opening ceremony, won her opening two matches in straight sets following a two-month mental-health break. But conditions were different Tuesday with the roof closed because it was raining outside.

Shortly after the match was over, organizers said that Osaka had left the venue and would not be talking to the media.

Vondrousova came out with her entire game clicking from the start and quickly ran out to a 4-0 lead in the first set as Osaka hardly had time to gather herself.

Osaka then broke Vondrousova’s serve in the opening game of the second set but almost immediately handed the break back when she double-faulted to make it 2-2.

After Osaka lost her serve again to end the match by hitting a cross-court backhand wide, she shook hands with Vondrousova at the net, walked to her chair, zipped her racket up in her bag and followed Vondrousova off the court.

While both players produced 22 winners, Osaka hit 32 unforced errors to Vondrousova’s 10. But it wasn’t simply an off day for Osaka; it was also an outstanding performance from Vondrousova.

During one point midway through the second set, Vondrousova hit an underspin, scooped forehand approach shot that landed right on the line — prompting Osaka to stare at the line for a few seconds in apparent disbelief.

Osaka had break points to take a 4-3 lead in the second but Vondrousova hit consecutive drop-shot winners to get back in the game and then held.

About 10 minutes later, the match was over.