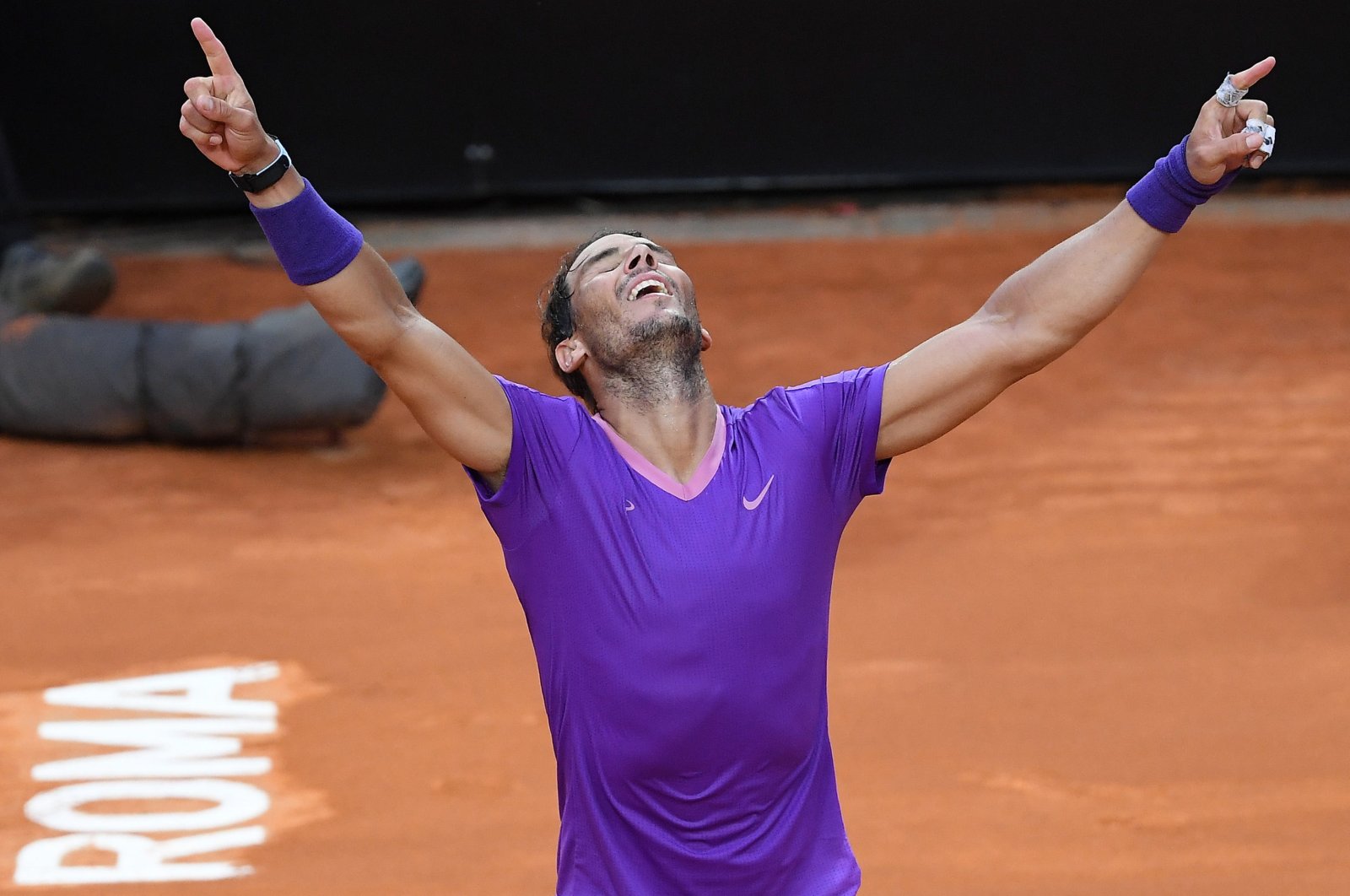 Rafael Nadal of Spain celebrates after winning his men's singles final against Novak Djokovic of Serbia at the Italian Open tennis tournament in Rome, Italy, May 16, 2021. (EPA Photo)
by French Press Agency - AFP May 16, 2021 10:30 pm
RECOMMENDED

Rafael Nadal warmed up for the French Open as he beat world number one Novak Djokovic with a battling 7-5 1-6 6-3 win to get a 10th Italian Open title Sunday.

Second seed Nadal won through 7-5, 1-6, 6-3 in 2 hours 49 minutes against the defending champion in the 57th career showdown between the pair.

"It's amazing I have this trophy in my hands for a 10th time, something impossible to imagine," said the world number three who also equaled Djokovic's record of 36 ATP Masters 1000 titles in his 12th Rome final.

"I remember the first final I won here in Rome back in 2005 against (Guillermo) Coria which lasted five hours," recalled the 34-year-old of his five-set battle past the Argentine.

Djokovic and Nadal were facing each other for the 57th time, having last played in the 2020 French Open final which the Spaniard won in straight sets.

The pair have won 15 of the last 17 Rome titles between them, while Nadal leads their head-to-head in finals in the Italian capital 4-2.

"I really wanted this title. This had been one of the most important titles in my career. I'd won 10 in Monte Carlo, Barcelona and Roland Garros and really wanted it here too," added Nadal.

Despite losing his opening service game Nadal broke back in the third game hitting twice as many winners as the Serb with 21 in the set.

A dip in form in the second set allowed Djokovic to break twice and get back into the game.

But Nadal got back on track in the third with Djokovic having played nearly five hours on court on Saturday between his rain-delayed quarter-finals and semi-final matches.

The Spaniard saved two break points on his serve in the fifth game and broke for love for 4-2.

Djokovic saved a first match point in the eighth game but Nadal made no mistake on his second chance in the following to seal his 88th career title after winning in Barcelona earlier this month.

"It doesn't get a bigger challenge than playing in the final against Rafa," said five-time Rome winner Djokovic, who leads their overall head-to-head 29-28.

"Overall three hours of high quality tennis. I'm disappointed not to win, but pleased with my level.

"Going into Paris it's a good sensation. I feel like I want to feel on clay. If I play like I did last night and today I think I have a shot in Paris.

"I'll play in Belgrade and then go to Paris ready to rock and roll."

The French Open gets underway in Paris on May 30 where Nadal will be chasing a record 21st Grand Slam title.

Djokovic, the 2016 champion at Roland Garros, will be hoping to become the first man in over half a century and just the third in history to win all four majors more than once.