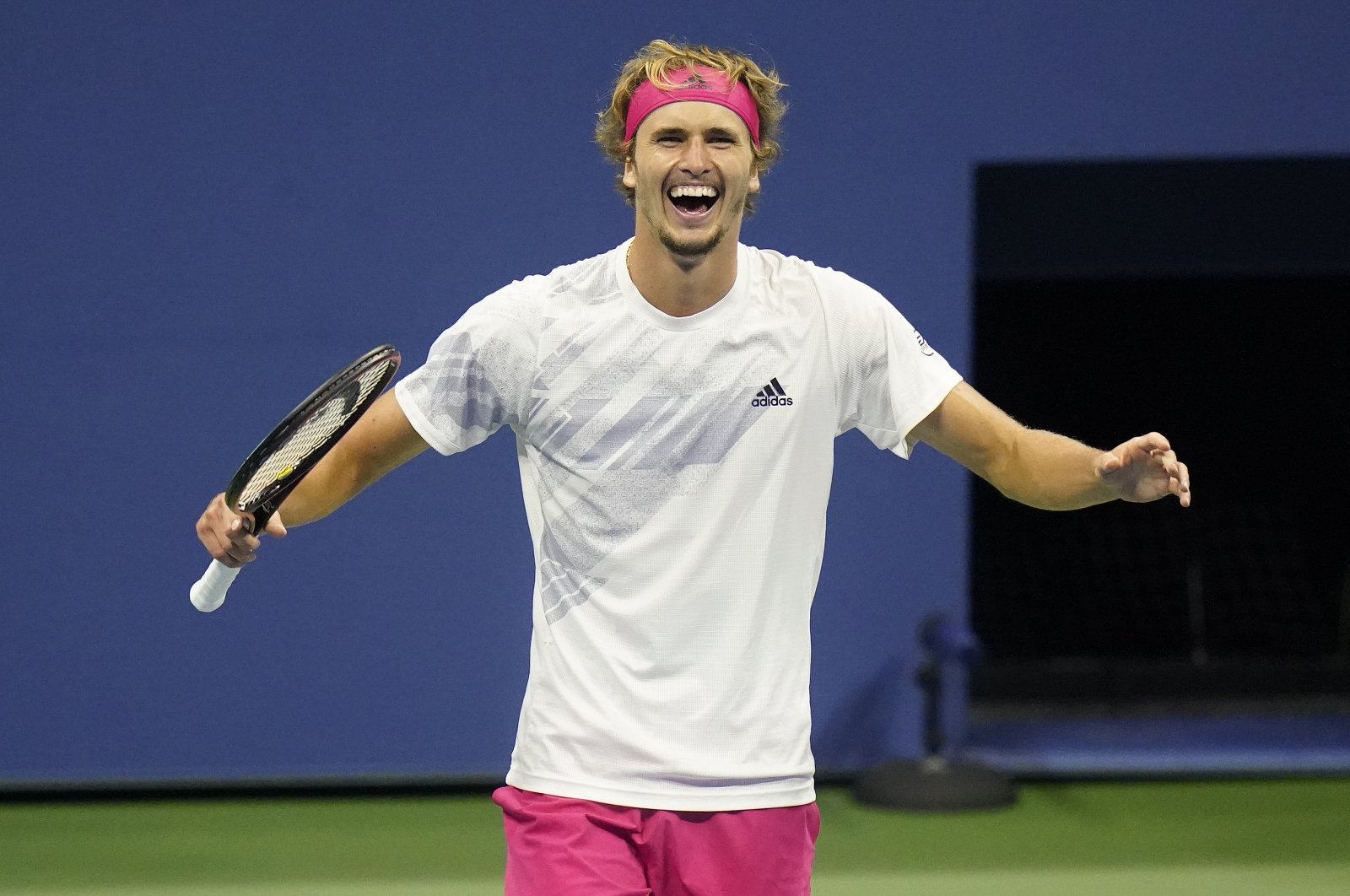 Alexander Zverev, of Germany, reacts after defeating Pablo Carreno Busta, of Spain, during a men's semifinal match of the US Open tennis championships, Friday, Sept. 11, 2020, in New York. (AP Photo)
by ASSOCIATED PRESS Sep 12, 2020 9:18 am
RECOMMENDED

For two full sets, Alexander Zverev was confused and listless, his body language as poor as his winner-to-error ratio against Pablo Carreño Busta in the U.S. Open semifinals Friday.

Zverev double-faulted and smacked his left high. He put a backhand into the net to cede the opening set and covered his face with both hands. He netted a forehand early in the next set, then turned a forlorn face toward his guest box and put his palms up.

When he pushed a backhand long after 1 hour, 25 minutes of play and shook his head, Zverev trailed by two sets, a deficit the 23-year-old German never had overcome. Never had been to a Grand Slam final, either. Done and done. Zverev constructed quite a comeback, getting his game in gear to beat a fading Carreño Busta 3-6, 2-6, 6-3, 6-4, 6-3 and reach the title match at Flushing Meadows.

Zverev, the No. 5 seed, will play No. 2 seed Dominic Thiem on Sunday, and one will walk away with his first Grand Slam trophy in a mostly empty Arthur Ashe Stadium; spectators were barred because of the coronavirus pandemic .

“Mentally, I stayed in it. ... A lot of players would have gone away,” Zverev said. “There’s no easy matches anymore. Sometimes you have to dig deep. Today I dug deep, dug very deep.”

Thiem, a 27-year-old from Austria, won a far more entertaining match Friday night, holding off 2019 U.S. Open runner-up Daniil Medvedev 6-2, 7-6 (7), 7-6 (5). Medvedev held a set point in both the second and third, but Thiem hung in there both times and now will try to improve his 0-3 record in Grand Slam finals. He has lost to Rafael Nadal at the French Open the past two years and to Novak Djokovic at the Australian Open this February.

“I love these big matches — even more when there’s a full stadium, but it’s also great in front of many, many TV spectators,” Thiem said. “To face the best guys in the world, that’s what I do the hard work for all the time at home and in the offseason.”

In an interlude redolent of his heel turn at Flushing Meadows a year ago, Medvedev got into it with chair umpire Damien Dumusois — yes, the very same official who cited him for yanking a towel from a ballperson in 2019, prompting boos from fans and some egging on from the Russian — and Grand Slam supervisor Wayne McKewen in the first set.

This time, the starting point was a dispute with Dumusois over whether Medvedev challenged a call in time. Medvedev walked around the net to take a closer look at the mark and was called for a code violation, so he started chirping at the chair umpire, saying “Why, because you’re not smart?” at one point, and “U.S. Open is a joke, right?” at another.

Then, turning his attention to McKewen, who was at courtside, and smothering his words with sarcasm, Medvedev said: “Sorry, I think I killed someone, right? Sorry, I was so bad to cross the net. Sorry. My apologies. My sincere apologies to the U.S. Open for crossing the net. Oh, my God.”

After the match, Medvedev still thought he was in the right — “I mean, what did I do? Did I hurt someone? Did I do something rude?” — but acknowledged he shouldn't have gotten so angry.

“I lost my concentration,” Medvedev said.

Thiem led 4-2 there and raced through that set. Medvedev went up an early break in the second and was two points from taking it while ahead 5-3 and Thiem serving at love-30, but couldn’t came through. Medvedev held a set point at 6-5 in the tiebreaker and faltered again, even though Thiem felt something in his right heel while chasing a drop shot.

Thiem began limping and wincing and was worked on by a trainer before the third set. His team also sent him some fresh shoes, but after he slipped behind the baseline on one point, Thiem shouted in German, clearly miffed. After the match, Thiem said he was pain-free.

“I lost the most important points,” Medvedev lamented, “and that’s how he got the win.”

Zverev is the first man to win a U.S. Open semifinal after a 2-0 set deficit since Djokovic did it against Roger Federer in 2011 — and, keeping good company, he’s also the youngest male finalist at any major tournament since Djokovic was 23 in New York in 2010.

Zverev's first trip to a major semifinal came in January at the Australian Open, where he was eliminated by Thiem, who leads their head-to-head series 7-2.

A day after a pair of well-played and competitive women’s semifinals — won by Naomi Osaka and Victoria Azarenka, who face each other Saturday for the championship — Carreño Busta vs. Zverev offered little in the way of those characteristics for two sets.

“A big opportunity,” the 20th-seeded Carreño Busta called it.

Zverev simply kept missing the mark, even on neutral balls.

Undeterred when Carreño Busta twice hit balls right at him during points in the fourth set, Zverev could throw his head back and allow himself a wide smile at the end.