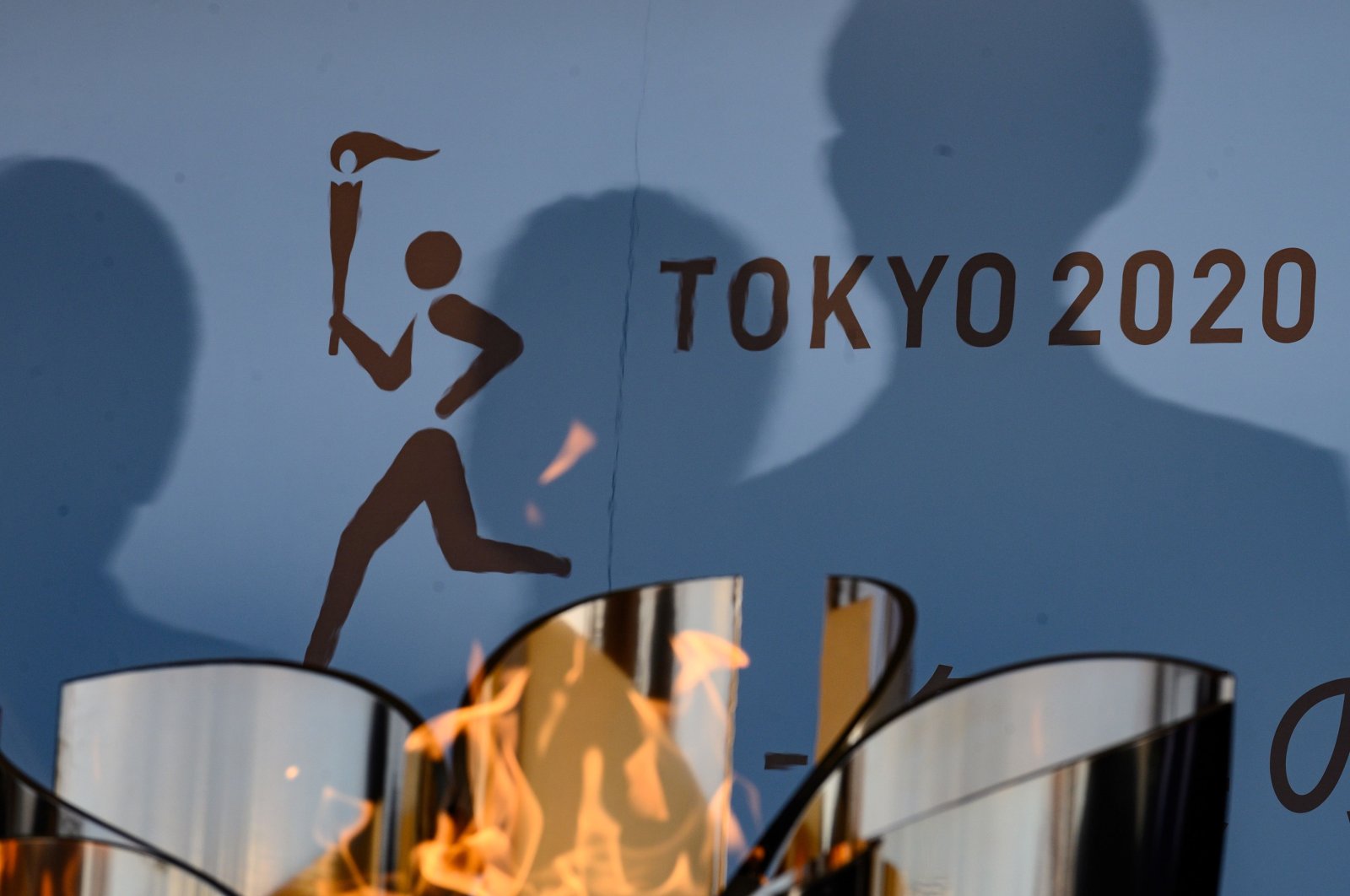 The logo for the Tokyo 2020 torch relay is pictured as the Olympic flame goes on display at the Aquamarine Fukushima aquarium in Iwaki in Fukushima prefecture, Japan, Wednesday, March 25, 2020. (AFP Photo)
by Compiled from Wire Services Mar 25, 2020 1:04 pm

As Japan awoke on Wednesday to the deflating reality that the Tokyo Olympics this summer have been postponed to next year, organizers were left to wrestle with a host of unanswered questions as they undertook the monumental event of reorganizing everything from scratch

Japan set about the unprecedented task of reorganizing the Tokyo 2020 Olympics Wednesday after making the tough decision to postpone the games by a year as the coronavirus pandemic locks down one-third of the planet.

The dramatic step to shift the Olympics, never before seen in peacetime, upends every aspect of the organization – including venues, security, ticketing and accommodation.

In a move symbolic of the difficulties now facing Tokyo, Olympic countdown clocks in the city switched from displaying the number of days to go, to simply showing today's date and the time.

"It's like taking seven years to build the world's biggest jigsaw puzzle and with just one piece to go, having to start again but now with less time to finish," tweeted Craig Spence, spokesman for the International Paralympic Committee.

It is not even clear exactly when the rescheduled games will take place, with the International Olympic Committee saying the new date would be "beyond 2020 but not later than summer 2021."

Japan has framed Tokyo 2020 as the "Recovery Games" – a chance to show the world it has bounced back from the "triple disaster" in 2011 when a massive earthquake sparked a tsunami and the Fukushima nuclear meltdown.

The delayed event – still to be called Tokyo 2020 – will now be a "testament to mankind's defeat of the new virus," said Japan's Prime Minister Shinzo Abe.

He repeated that message in a Wednesday call with U.S. President Donald Trump, in which the leaders agreed the games would be "proof that humans have beaten the new coronavirus," a Japanese government spokesman said.

The Olympic flame "could become the light at the end of the tunnel in which the world finds itself at present," Japan and the IOC said in a joint statement.

'Way bigger than me'

The quadrennial Olympics, which has weathered boycotts, terrorist attacks and protests, is the highest-profile event affected by the virus that has killed thousands and postponed or canceled sports competitions worldwide.

The IOC had come under fire for appearing out of touch by sticking to its schedule, but it eventually bowed to the inevitable, citing the need to protect the health of athletes.

Bach said the postponement was "about protecting human life," with more than 11,000 athletes expected, along with 90,000 volunteers and hundreds of thousands of officials and spectators from all over the world.

U.S. swimming star Ryan Lochte summed up the combination of disappointment and relief expressed by most athletes, after many had voiced anger at being asked to continue training during the pandemic.

"I was a little pissed off because I've been training my butt off, and I've been feeling great," the 12-time Olympic medalist told the Los Angeles Times.

There were similar feelings on the streets of Tokyo, which had won widespread praise for its preparations, with tickets in high demand and venues completed well ahead of schedule.

"It is disappointing for sure, but when you think about the health of athletes as well as spectators, I understand," IT engineer Momoko Doku told AFP on the bustling Shibuya crossing.

"The new coronavirus is spreading so fast in the world, and this is a very serious issue internationally," he said.

The Japanese media were also broadly supportive, although the Tokyo Shimbun daily screamed "surprise and embarrassment."

"It is like all the efforts of the last seven years are back to square one," the Nikkei business daily said.

The Olympic torch relay, due to begin from Fukushima Thursday, has also been postponed, but the flame will stay in the area until it is safe to begin.

Organizers now have to wrestle with a host of unanswered questions: Are the venues still available? What to do with ticket-holders and volunteers? How to fit the games into a crowded 2021 sporting schedule?

The athlete's village was due to be renovated into more than 4,000 luxury apartments, hundreds of which have already been snapped up. Tens of thousands of hotel rooms will need to be canceled and rebooked.

Japan and the organizing committee were spending $12.6 billion on the games, and experts say they may need to spend around half that again to rearrange the event – before hopefully recouping the losses when the Olympics are held.

Tokyo 2020 President Yoshiro Mori, an 82-year-old former prime minister and cancer survivor, pointed to his own health battles as inspiration for the difficult times ahead.

"We have no choice but to have hope. I myself suffered cancer... But I was saved by a new drug. I am here, allowed to live.

"Let us hope for these things."