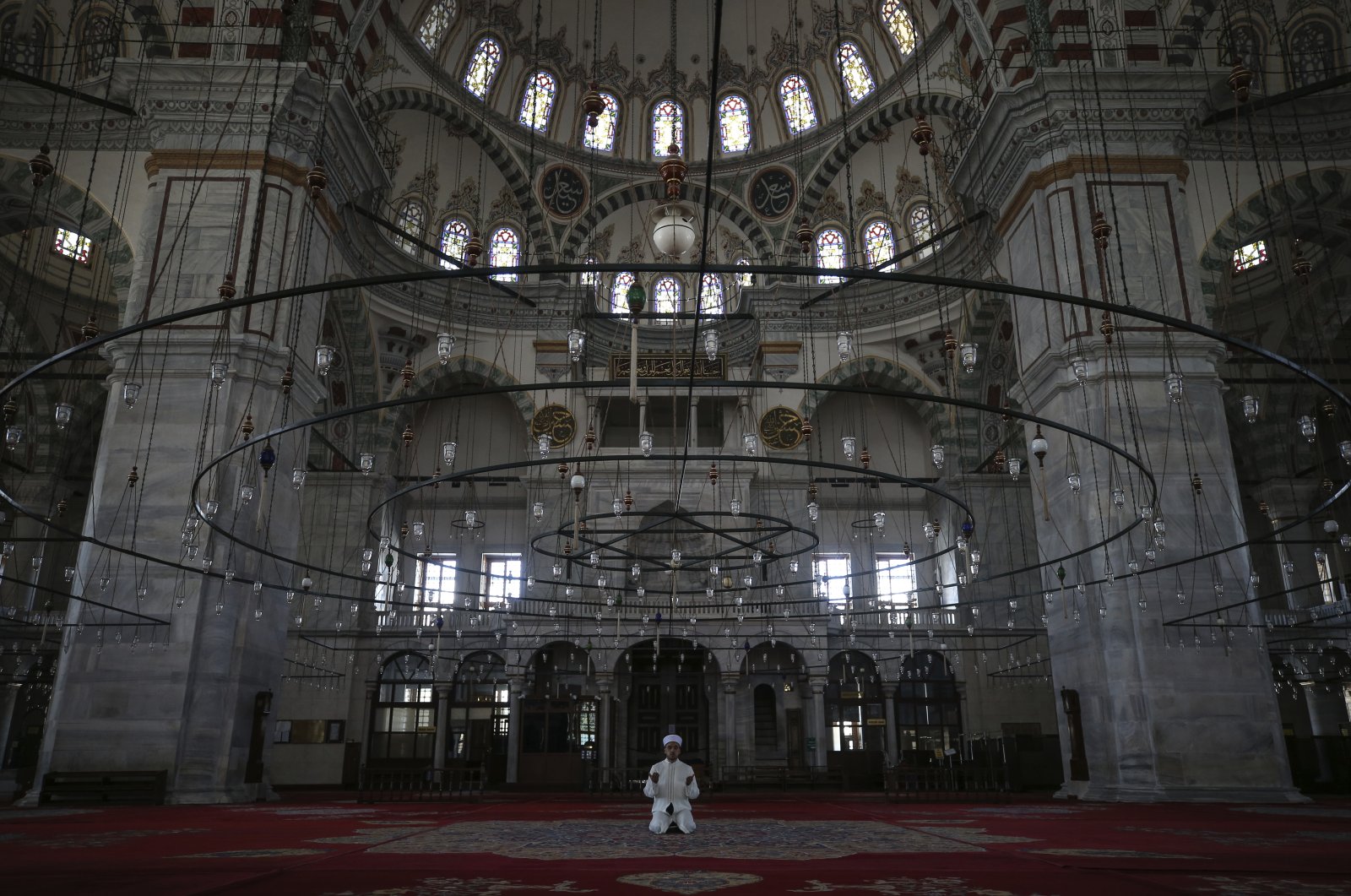 Esat Şahin, imam of the iconic Fatih Mosque, conducts a prayer during the first day of the holy fasting month of Ramadan without the public due to coronavirus restrictions, Istanbul, Turkey, April 24, 2020. (AP Photo)
by DAILY SABAH May 22, 2020 12:10 pm
RECOMMENDED

Ramadan Bayram, also known as Eid al-Fitr, is the first religious holiday to fall victim to the COVID-19 pandemic bearing down on the world. A joyous occasion marking the end of the Islamic month of fasting, Ramadan Bayram became a somewhat muted event spent at home for millions.

Restrictions in place to prevent the coronavirus from spreading meant an end to centuries-old traditions for the faithful. Instead of visiting parents, children, relatives and friends, Muslims in Turkey – and around the world – will be forced to continue self-isolation.

Traditionally, the holiday that started Sunday, sees people traveling between cities, either to spend the bayram with relatives and at a holiday resort. Every year, thousands hit the road, in an unprecedented exodus from big cities to coastal towns or inner regions of Anatolia.

This time, however, a four-day curfew in big cities that would start Saturday, on the eve of the three-day holiday, dramatically ended that exodus. It robbed millions of a chance for a brief vacation in popular holiday resorts in the Mediterranean and the Aegean regions. More importantly, they were deprived of seeing family members living in other cities, as along with curfew, a ban on intercity travel remains in place. The only solace is the reduced number of traffic accidents that claim hundreds of lives during every exodus related to holidays.

Another tradition that fell victim to the coronavirus was kissing the hands of the elderly to exchange bayram greetings. Social distancing rules meant a break from the tradition this year. Senior citizens are already confined to their homes due to an exclusive weekslong curfew. Similarly, children and teenagers are banned from leaving home due to another curfew in place. Thus, both sides had to resort to video calls to exchange bayram greetings.

Bayram prayers, which see unusual crowds in mosques across the country, were also canceled. Mosques were devoid of a congregation in the early hours of bayram’s first day where the collective prayers are performed.

Turkey, like the majority of the global Muslim community whose population amounts to about 1.8 billion, spent the month of fasting under coronavirus measures too. Nightly tarawih, a collective prayer, was barred as mosques were closed due to pandemic. Splendid iftar dinners at restaurants or homes of friends and relatives were also absent this year as people avoid contact out of fear of infection.

“We spent Ramadan with a heavy heart this year due to the coronavirus pandemic. But, as Allah says in the Quran, verily, with every difficulty, there is relief. By God’s will, we will overcome this difficulty. I hope we will spend next Ramadan the way we long for,” President Recep Tayyip Erdoğan said in a video call to a Ramadan-related event on Tuesday.

One tradition that managed to escape the clutches of the pandemic is bayram’s original name: fitr. Fitr, a type of almsgiving specific to Ramadan and usually observed before bayram, was a special occasion this year. As pandemic put many out of business and took a harsh toll on the impoverished, it came as a relief for millions. Through charities, fitr was distributed to the poor across the country while nongovernmental organizations continued delivering aid throughout Ramadan and bayram.