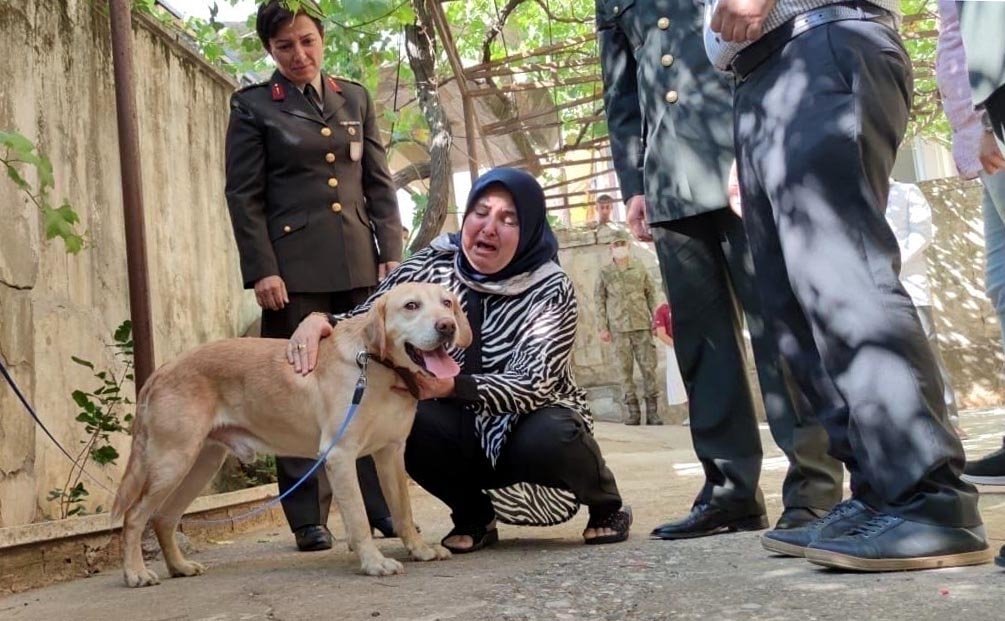 It was an emotional moment for the Akdal family when Atmaca walked into their courtyard. A mine detection dog, Atmaca, survived an attack where his human companion, Specialist Sgt. Ahmet Akdal, was killed in northern Syria in April. Both were there as part of a mission deployed after Operation Olive Branch by the Turkish army.

The two were as close as Akdal’s comrades in arms. “I feel like my son is back. I feel his smell on Atmaca; I am so happy,” said Remziye Akdal, the mother of the deceased soldier, as the dog was brought to the family’s home in Turkey's southern province of Kahramanmaraş.

Military officials delivered the dog to the family for adoption, three months after the PKK attack that killed Akdal and injured Atmaca, following the latter’s treatment. After the attack, Atmaca was “retired” from the army, where he accompanied the sergeant for the past two years following his training in the hands of Akdal. The family had earlier asked the Turkish Armed Forces (TSK) to give the dog to them for his care.

A colonel and Akdal’s friends from the army handed over the dog to the family Sunday. The fallen soldier’s parents and siblings burst into tears as they saw the dog, embracing each other and then the dog, which helped Akdal and his company steer clear of deadly mines.

“He is what my son left behind in this world. He is my new son,” the soldier’s father, Feramuz Akdal, told Anadolu Agency (AA). “This is our Ghazi,” he said, referring to a title used for soldiers who survived terror attacks and battles. “I assured the army that I will take good care of our Ghazi,” he said.

“He is like a part of my son. I am very happy now. He smells just like my son,” mother Remziye Akdal said.

Dogs are an integral part of the army, especially in counterterrorism operations. Trained to sniff explosives, they were critical to preventing potentially harmful blasts by land mines and improvised explosive devices (IEDs), which targeted Turkish troops in Operation Olive Branch and Operation Euphrates Shield in Syria's north.

A veterinary school in the northwestern province of Bursa trains and supplies dogs for the Turkish army. Along with mine detection, they accompany soldiers in reconnaissance missions and track down hostile elements.