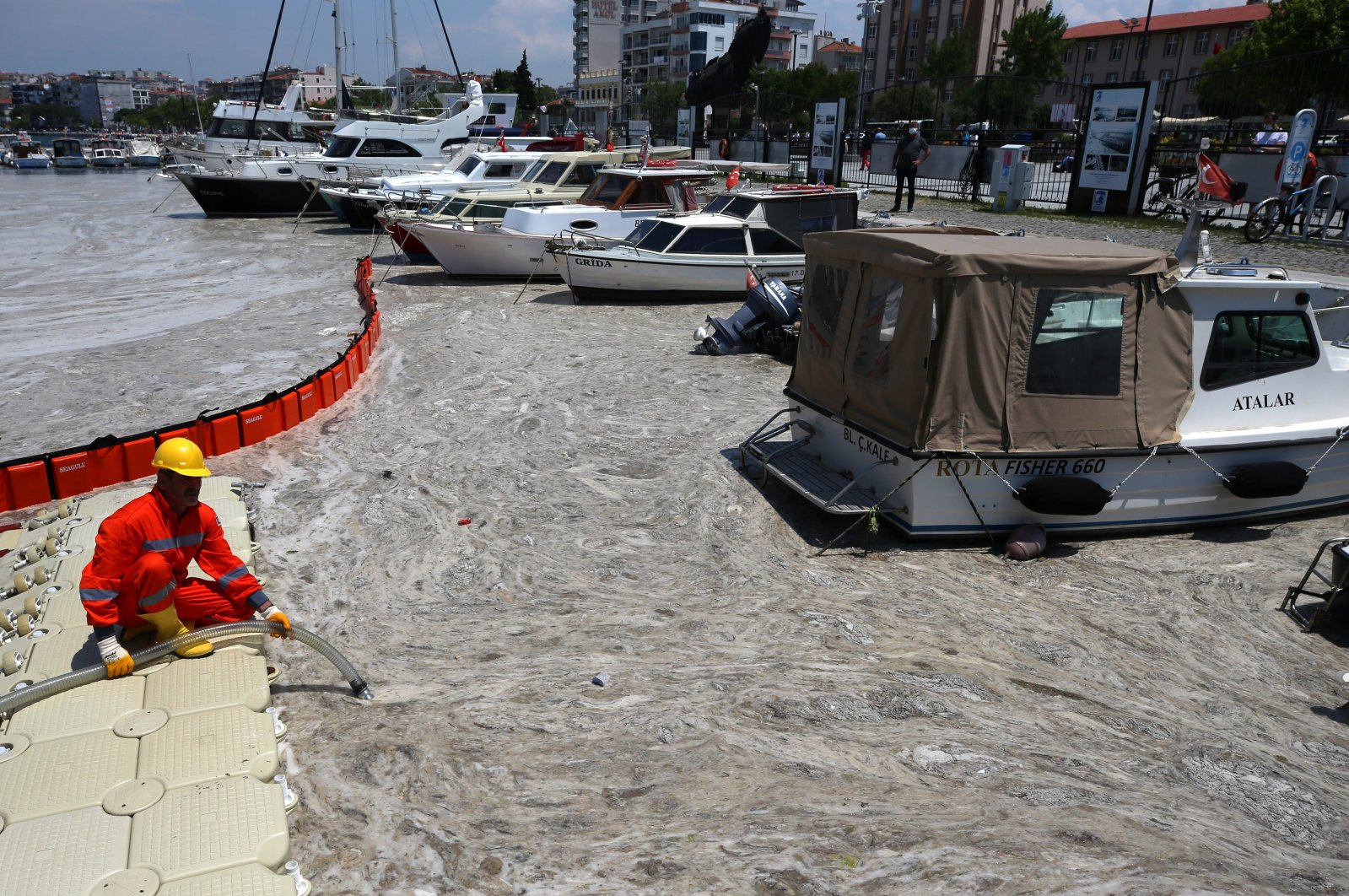 Two days after the government announced an emergency action plan against the ubiquitous marine mucilage, also known as "sea snot," the Ministry of Environment and Urban Planning has launched a cleanup campaign in the Sea of Marmara on Tuesday.

The partly-landlocked sea is the victim of the mucilage, an amassing of microorganisms thriving on pollution and climate change, over the past few months. Municipalities have been deploying crews to clean up the thick, slimy substance existing mainly near the shores. But efforts to completely eradicate it have so far failed.

Environment Minister Murat Kurum initiated the “mobilization” against mucilage at Caddebostan shore on Istanbul’s Asian side with a ceremony.

Cleaning crews embarked on a mission against the mucilage in Kocaeli, Bursa, Balıkesir, Yalova, Çanakkale and Tekirdağ where the mucus-like phenomenon destroyed underwater habitat, reduced fishing and dealt a blow to tourism.

"We are starting Turkey’s most comprehensive, largest sea cleaning effort. We will go through an important process. We deployed 1,000 personnel for this task," Kurum said at the ceremony. Kurum said it was an important issue for the 25 million people living in seven provinces littoral to the Sea of Marmara. The minister was accompanied by scientists, nonprofit organizations, municipality officials and celebrities who threw their support behind the environmental cause.

Kurum said the world was witnessing a climate change that started climbing up in the 1990s and that nature was “crying for help.” “We have a clear responsibility toward nature. We have to mobilize against this global crisis, this pollution,” Kurum said.

Sea snot has been reported in the past at Marmara but it was sporadic and limited. Experts say the climate change’s effects on seawater temperatures, coupled with untreated waste dumped at sea, prolong its life and the area it covered.

Kurum added they were meticulously examining the situation and pledged a swift solution. He pointed out that different spots in Marmara were analyzed with water samples and inspections and they held a workshop with hundreds of scientists, nongovernmental organization (NGO) members and municipality officials to address the problem last week.

The minister said they would declare the “entire Marmara” an area designated for preservation by the end of this year, by stopping pollution stemming from agricultural and industrial activities. “We will update our wastewater treatment systems. We are determined to rescue Marmara and we will,” he said.

Dozens of boats hit the sea as Kurum spoke while divers jumped into waters to check the impact of mucilage at the seabed. The minister said the cleaning work and other steps would be conducted on a “round the clock” basis.

“We will not abandon Marmara, home for ships, fishermen, an inspiration for poets and a source for the Çanakkale Strait and Bosporus,” he said.