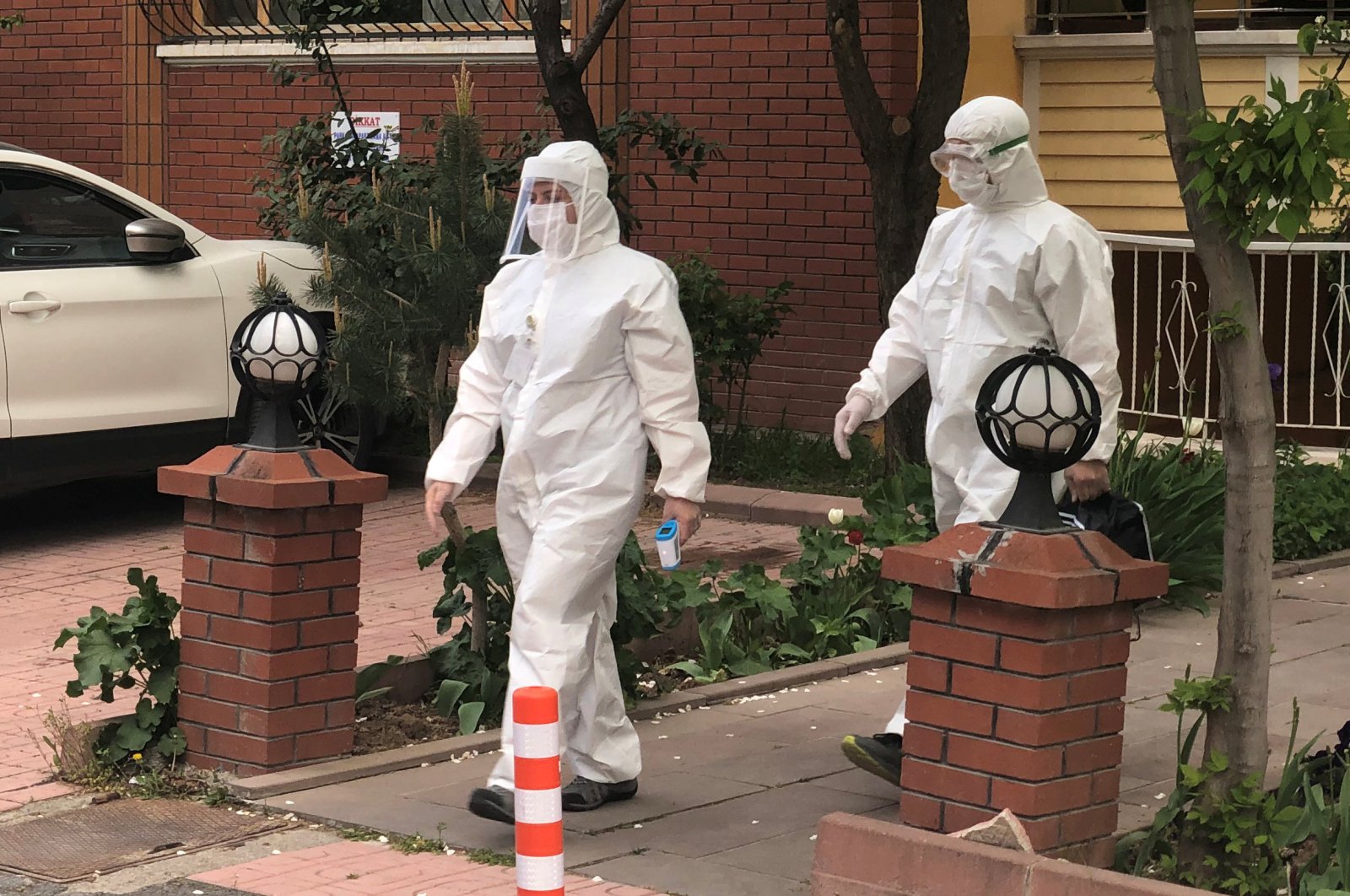 Members of the Health Ministry's coronavirus contact tracing team leave after visiting a home to check a suspected case of COVID-19 in Ankara, April 27, 2020. (Reuters Photo)
by REUTERS
May 01, 2020 11:27 am

Two medics in protective suits jumped out of a car in a deserted street in central Ankara and hurried inside a building – one carrying medical equipment and the other, paperwork.

Some 15 minutes later, they sped off to their next appointment, one of nearly 6,000 teams, or "filiation units," deployed across Turkey. Filiation is the screening of the chain of contact in case of an infectious disease.

After recording some of the fastest growth in COVID-19 infections in the world, health officials say the outbreak in Turkey has hit a plateau around six weeks after the first case was confirmed. The death toll of 3,174 is lower than 11 other countries in the world.

The daily death toll has been on a downward trajectory for the last 10 days, with 93 deaths confirmed in the past 24 hours, according to Health Ministry data.

In contrast to South Korea, which limited deaths to below 250 with the help of a contact-tracing app, Turkey has taken a more labor-intensive approach.

Koca said on Wednesday around 5,800 teams of two or three medics had identified 468,390 people who have been in contact with coronavirus patients. He said around 99% of those had been reached and were regularly monitored by health officials.

In the capital Ankara, a coordination center oversees the field visits and follow-up calls by telephone. The two groups cooperate to identify, test and report cases across the city.

"Since a household is on average four to five people, with the workplace added in, there have been cases where we tracked 200 people at once," said Ayşe Çiğdem Şimşek, the Ankara Provincial Health Directorate deputy chairwoman of public health services.

Under the system, the teams are tasked with telling contacts of COVID-19 sufferers to stay at home for 14 days, even if they do not have symptoms.

Other teams are then instructed to call them daily to ensure compliance and check on their health. If they report symptoms, they get another visit to give a sample for testing in the hospital, Kerime Altunay, a public health doctor and coordinator of the remote monitoring team in Ankara, told Reuters.

The system grew out of a method Turkey had been using for decades to contain previous outbreaks of measles and the flu, Şimşek told Reuters.

Schools were closed immediately and other measures, including the closure of nonessential shops and factories and compulsory lockdowns on weekends, were introduced in stages.

The lockdown has been stricter than South Korea but less stringent than some European countries like Spain or Italy.

Koca said Wednesday that the coronavirus outbreak was at its peak and would decline, and that contact tracing would continue to ensure it does not reignite.

Mustafa Necmi Ilhan, head of the Public Health Department at Gazi University Medical School, said the initial speed of the outbreak in Turkey, which was similar to the worst affected countries such as Italy, prompted fears but that contact tracing helped break the chain of infection.

Turkey also says its distinctive practice of delaying the transfer of patients to intensive care from other wards has helped limit the death toll by easing pressure on intensive care resources, such as medical gear and staff.

Ankara has stressed the early use of high flow oxygen instead of intubation when respiratory difficulties appear, as well as early administration of hydroxychloroquine, an anti-malarial drug, before patients develop more severe symptoms. Ilhan said the drug was administered carefully, in different doses depending on the age and health of the patient. While it may have side effects, none had appeared so far, he said.