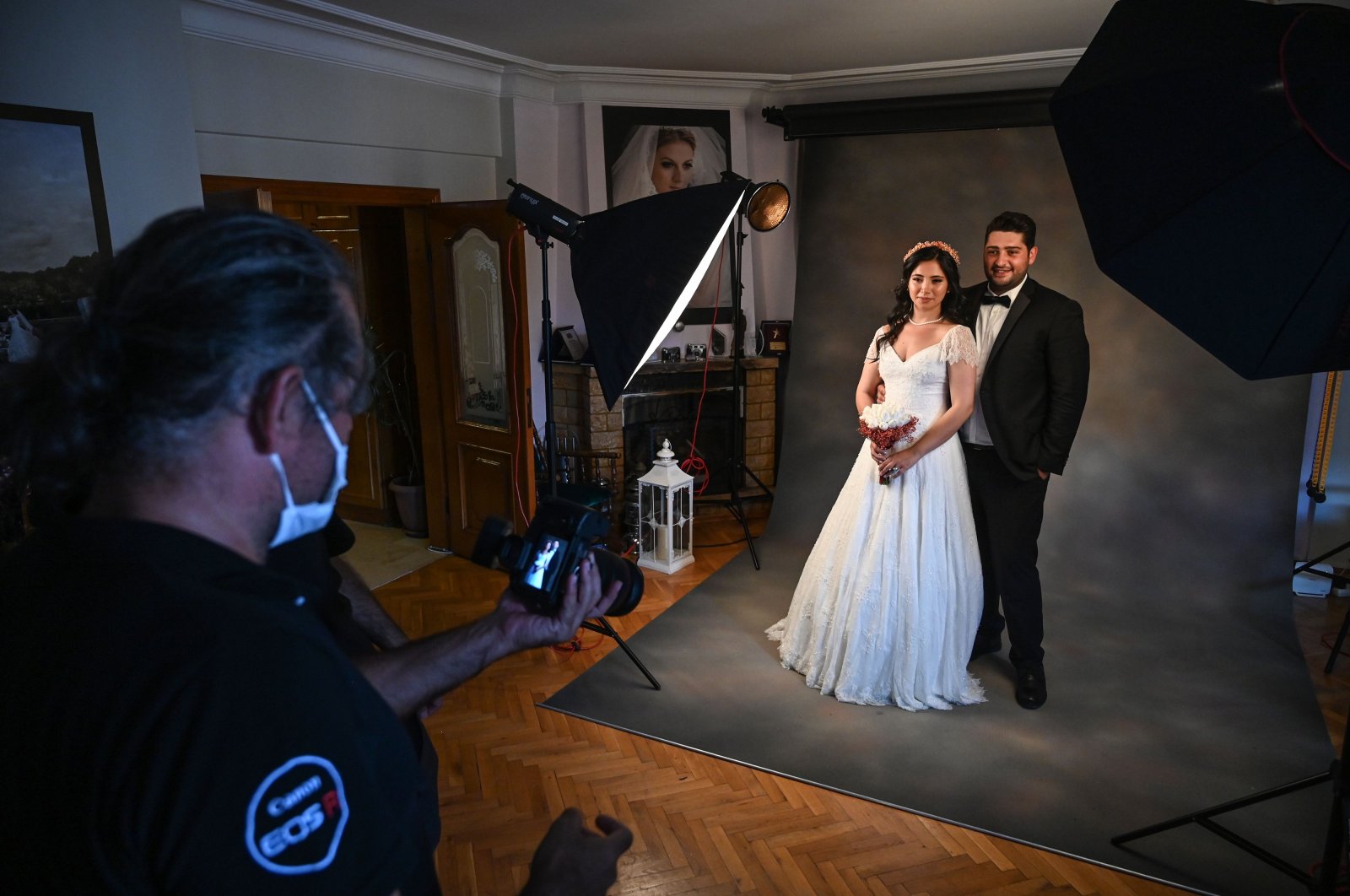 As social gatherings go, wedding parties are the most crowded and with little chance of social distancing amid the pandemic, forcing couples and organizers to scramble for preventative measures and scale back sumptuous celebrations

Her bridal hair and makeup done just right, Ayşe Keleş looked ravishing and relieved, having managed to sneak her wedding day in before Turkey's latest wave of coronavirus restrictions hit. "I have a close friend who had to delay her wedding five times," the 28-year-old said in her white bridal gown while preparing for a photoshoot on the Asian side of Istanbul.

Lavish weddings with fancy cakes, sparkly dresses and wild parties are a huge deal in Turkey, laying the foundations for a new life for millions. But the joyous day drew the government's wrath when videos of raucous street parties with mask-free, arm-to-arm dancing went viral just as Turkey's infection rate began to edge back up to levels last seen in May.

In the Black Sea city of Trabzon, dozens who celebrated a henna night, a wedding custom in which a bride's female friends and family her leaving the family nest – all had to be quarantined after one tested positive. The government's hammer fell on Sept. 4, after which weddings, engagement parties and circumcision ceremonies became limited to an hour in length, with dancing and catering banned.

Keleş married the love of her life, Alp Çolak, on Aug. 21, just in time for a real wedding – but still two months later and slightly smaller than planned due to uncertainties about what would be allowed. "It was fun, but we had bigger plans that didn't come through because of the restrictions," Çolak recalled. "Still, if it were now, even that would be a dream."

Health Minister Fahrettin Koca has said Turkey is going through "a second peak of the first wave" of the pandemic, which has officially claimed nearly 7,000 lives in the nation of 83 million. Koca specifically blamed "carelessness during religious festivals and weddings" for the rise.

Uncertainties and postponements of weddings can be especially upsetting in places such as Turkey, where most couples live with their parents before marriage.

"Every couple would like to have a fairy-tale wedding. But we, the 2020 corona brides, we are all anxious," Keleş said. Turkey has 600,000 weddings annually. Contracts for their organization are concluded months in advance and often involve sums equal to households' yearly incomes. In return, gold coins, jewelry and money gifted to the couple help reduce their families' debts.

"We are talking about a 60 billion lira sector ($8 billion) if we consider that an average of 100,000 lira ($13,000) is spent on each wedding," said Emek Kırbıyık, who heads dugun.com, Turkey's biggest wedding planning website. He estimated that the industry will suffer a $2.6 billion loss this year, although this could rise.

Zeynep Ece Dündar, an Istanbul wedding planner, said she had so far managed to organize 10 events this year, compared with 70 during the same period in 2019. "We barely make ends meet," she said.

The government thought limiting wedding ceremonies to an hour would make them smaller and safer. But these end in losses for the companies involved, meaning they plan very few if any at all, even if the couples want them. "With only water (but not food) served, we cannot turn a profit," said Hakan Kaya, who runs a green spot in an upscale Istanbul neighborhood often rented for wedding parties. "At this stage, it makes more sense for us to stay closed."

Emek Kırbıyık agrees that curbs are needed to prevent the spread but says one sector alone should not bear all the responsibility or cost. "I liken the current situation to a bucket with holes: they try to block one hole, which is the wedding sector, but the water keeps leaking out of the bucket," he said. "If measures are to be taken, they should be all over the place. Weddings should not be made the scapegoats."

Authorities started stepping up measures again for wedding parties after a rise in cases.

On Friday, the governorate of Istanbul banned boating companies from hosting weddings and similar gatherings as part of new measures to combat the spread of COVID-19 in Turkey's most populous city.

The governor’s office also reintroduced a ban on concerts and festivals in open spaces. A statement from the office late Friday said the restrictions were needed because people were not adequately heeding precautions like physical distancing, and confirmed virus cases have increased.

“To protect each other, we have to protect our loved ones. An effective fight against the virus is only possible with PROTECTION TOGETHER,” Koca wrote on Twitter.

While the number of patients in critical condition now stands at 1,223, over 50 more patients have died from the disease, pushing the total death toll to 6,951.