Coronavirus vaccination in Turkey begins for citizens 75 and above 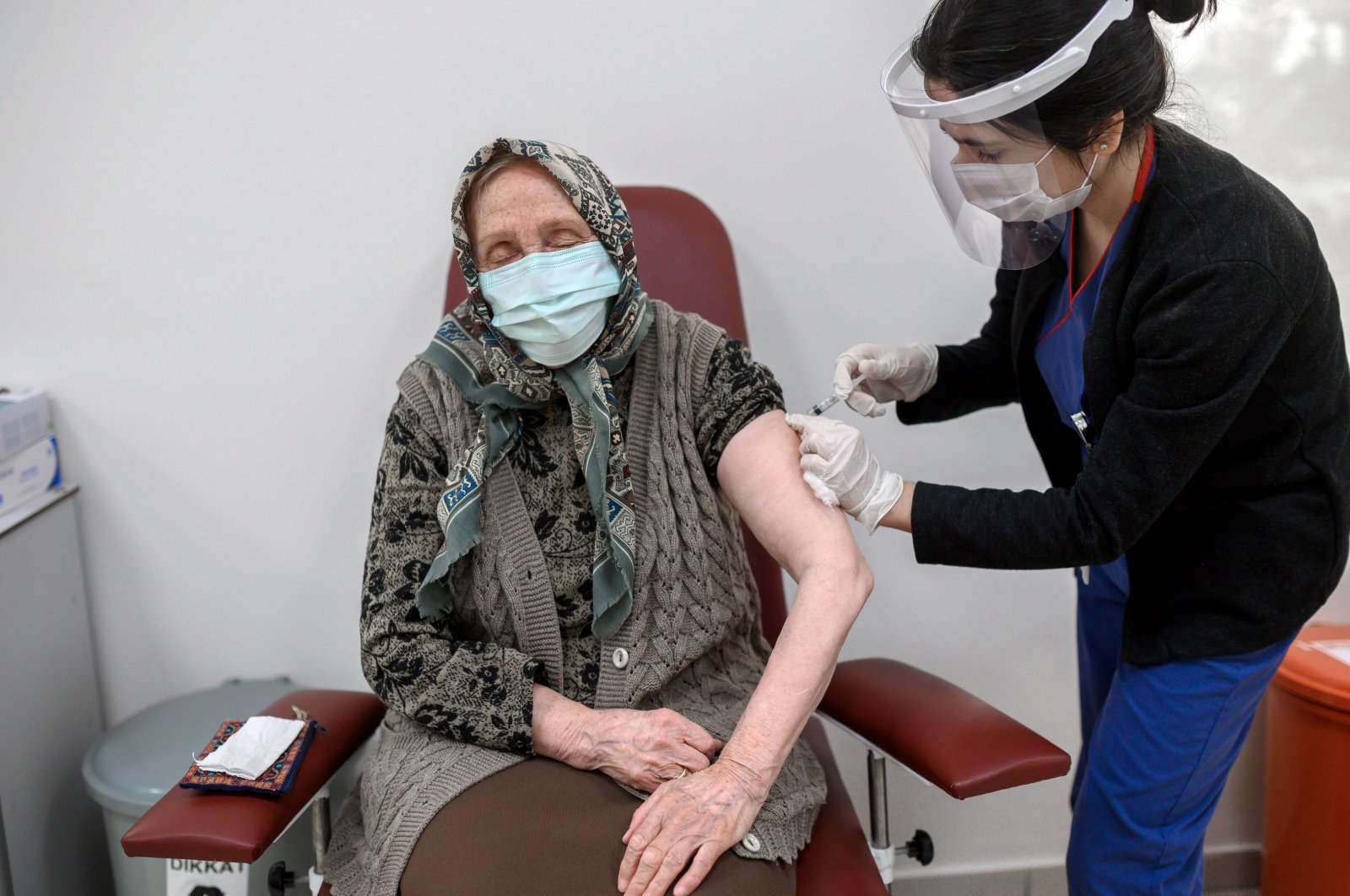 The mass inoculation of the population against the coronavirus continues with the launch of vaccinations for people at the age of 75 and above as Turkey has reached out to more than 1.5 million people in its nationwide drive

Turkey managed to inoculate more than 1.5 million people against the coronavirus in two weeks, and the campaign continues at full speed. On Thursday, the vaccination efforts were expanded to people at the age of 75 and above.

People are receiving CoronaVac, developed by China’s Sinovac, an inactive vaccine the country started receiving shipments of last month. Health care workers were the first to receive the shots, and under a mass vaccination plan, the elderly citizens are next in line. The age limit will gradually drop in line with the plan. People living in nursing homes and nonagerians were in the first group broadly described as “people at the age of 65 and above.” The elderly and frail citizens unable to leave their homes are vaccinated at home by health care workers.

Citizens at the age of 75 and above will be able to get appointments from hospitals and neighborhood clinics across the country to receive the vaccine. The Health Ministry’s internet portal, smartphone apps and a hotline allow citizens to easily schedule an appointment in the nearest clinic equipped with designated vaccination rooms separated from other facilities.

CoronaVac was the first vaccine to gain emergency-use approval by health authorities in Turkey, following a meticulous analysis process. The government plans to acquire more vaccines from Sinovac and is in talks with other companies for the acquisition of vaccines.

Health Minister Fahrettin Koca, who issued a written statement after a meeting of his ministry’s Coronavirus Scientific Advisory Board Wednesday evening, said the “army of health care workers were armed (with vaccines) and our elderly are under protection” thanks to the inoculation. Koca also pointed out a drop of up to 80% in the number of coronavirus cases thanks to restrictions. But he warned the public to continue complying with measures to prevent another surge in the outbreak. “There is still a high risk in the world from the coronavirus,” he underlined.

Wearing protective masks against the coronavirus is mandatory in public across the country. Turkey also enforces nighttime curfews on weekdays and a partial nationwide lockdown on weekends. Restaurants and other businesses where crowding occurs, as well as schools, have also been shut down.

Koca said that although the decline is evident, it is “slow.” “We still have daily cases fluctuating between 5,000 and 7,000,” he lamented. “In this stage of our struggle, getting together in crowded, enclosed environments can take us farther from our goal to see better days. I urge all of our citizens to adhere to measures and restrictions at a maximum level. Any uncontrolled relaxation of measures can lead us to face new surges we cannot recover from easily. Bear in mind that the outbreak was spread to the world from one person,” he warned.

No change in second dose

Those who received their first jab of CoronaVac will receive their second dose from the same brand of vaccine, scheduled to be administered four weeks after the first dose, a Coronavirus Scientific Advisory Board member said. Associate professor Afşin Emre Kayıpmaz told Anadolu Agency (AA) on Thursday that the second batch of CoronaVac which arrived in Turkey on Monday would speed up the vaccination process. “It will help us to achieve immunity without interruption,” he said.

Kayıpmaz said Turkey was looking to diversify the vaccines available to the public and assured that every vaccine, whether CoronaVac or another brand, will be safe once the health authorities give it approval after a lengthy analysis process.

“People will be free to pick whatever vaccine is available, but they are required to have the second dose from the same vaccine they had in their first dose,” he said, adding that people can be inoculated with other vaccines, too, in the long run.

“A vaccine may provide protection for at least six months. You can get vaccinated with a different vaccine after that period and if you are at risk of infection,” Kayıpmaz explained.

Along with providing vaccines to its own citizens, Turkey has also reached out to the Turkish Republic of Northern Cyprus (TRNC) to aid in the fight against the coronavirus. On Thursday, a Health Ministry airplane carrying 20,000 doses of CoronaVac landed at Ercan Airport near the capital Lefkoşa (Nicosia).

“Motherland Turkey has always been with us, and these vaccines show their support will continue,” TRNC Health Minister Ali Pilli told AA, using an affectionate name for their northern neighbor. “I give heartfelt thanks to President Recep Tayyip Erdoğan, Vice President Fuat Oktay and Health Minister Fahrettin Koca on behalf of my country,” he said.

Ankara initially sent 20,000 doses of CoronaVac to Turkish Cyprus on Jan. 14. “We had almost run out of stocks (after mass vaccinations), and Turkey immediately sent a second shipment,” Pilli said. The minister noted that they had agreed to receive about 500,000 doses of the vaccine from Turkey in earlier talks with Turkish officials.

The Turkish Cypriot government started its vaccination campaign on Jan. 15. The island nation has a population of about 385,000 people. So far, 14 people have died of the coronavirus in the country while the number of daily cases reached 52 on Wednesday.

Also on Wednesday, the government announced a long lockdown in Lefkoşa (Nicosia) and Girne (Kyrenia), two major cities on the northern third of the island, which is divided between Greek Cypriots and Turkish Cypriots. The lockdown will end on Feb. 3 in Lefkoşa and Feb. 10 in Girne. Additionally, the entire country will be subject to a curfew starting at 8 p.m. on Friday and ending at 5 a.m. on Monday.