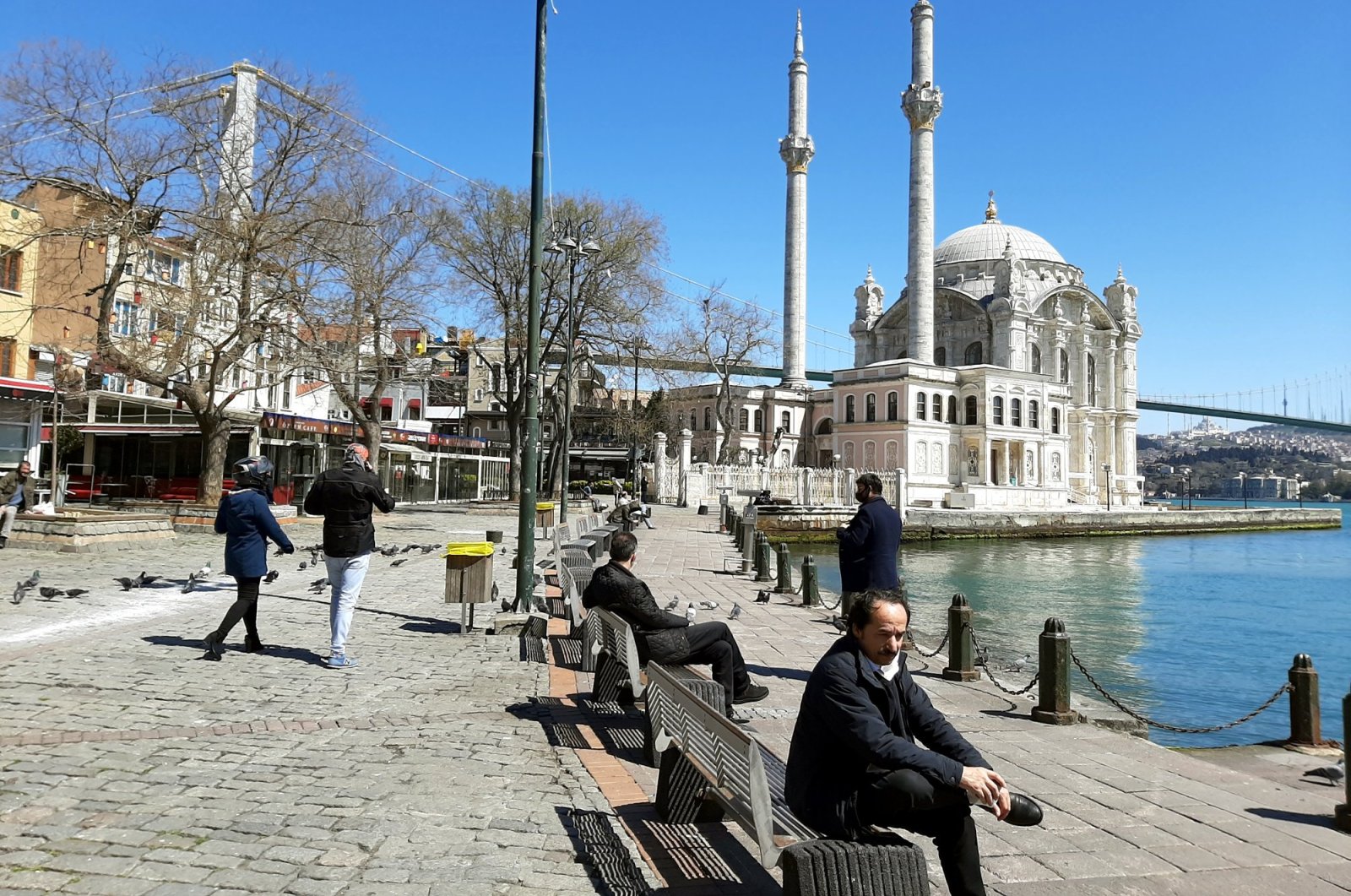 People are eager to leave home as spring blooms amid the coronavirus pandemic, but experts urge caution, noting the virus threat has not yet passed

“Nothing will happen to me” is the beloved motto of reckless Turks as many harbor this excuse as they leave their homes, flocking to the streets amid the deadly coronavirus pandemic. As the bad weather that lingered for weeks improves and sunny days are now here, streets are beginning to be crowded again in many cities. Sure, there are fewer people in the otherwise busy venues in big cities, but shoppers or those bored at home still trickle into the streets. In the meantime, the death toll from COVID-19 continues to increase. Medical experts say Turkey is still going through a critical stage in the fight against the pandemic and warn citizens to heed the calls for self-isolation and social distancing.

In Istanbul, where most cases are recorded, esplanades – favorite locations for joggers and walkers – were a bit more crowded than usual on Thursday and Friday, despite being closed to pedestrians under a recent ban. Police patrolling the esplanades in the Beşiktaş, Bebek, Ortaköy, Arnavutköy and Rumelihisarı districts handed out fines to violators. Busy streets and venues in other cities also saw a higher number of people outside as well, though still less compared to the preoutbreak period. Although the curfew only applies to those under the age of 20 or above the age of 65, violations of social distancing rules, such as standing at least three steps away from a person, are being enforced and police are imposing fines for those violating the rules. In the southeastern province of Şanlıurfa’s Siverek district, police issued fines to 522 people for violating bans as crowds gathered in central areas of the district as the warm weather drew people out of their homes.

Mustafa Öner was heading to a forest with his son, who was supposed to stay home due to the curfew, to pick mushrooms, in the western city of Denizli. When police stopped the duo and issued the fine, Öner said he did not know his son was banned from going into the forest. “There is fresh air, there won’t be coronavirus there,” he claimed.

Ramazan Doğru was fined TL 1,000 (around $149) for violating social distancing rules while walking in Istanbul's famed Taksim Square. “It does not make sense, but it is fine if people are this ignorant,” Doğru said. Police also fined a couple walking too close together.

In the southern city of Antalya, two young men engaged in a brawl were confronted by police officers. To their surprise, they were fined for ignoring social distancing rules as they fought in close quarters. The two men were handed a TL 3,150 fine each.

Turkey, which has adopted a string of measures since the first coronavirus case was reported in March, is going through what many experts call a critical phase before the cases peak and future downward or upward trends become apparent. The first two weeks of April will determine the course of the outbreak, and it is crucial to stick to self-isolation measures, according to experts.

Professor Hasan Tezer, a member of the government’s Coronavirus Science Board, which oversees measures against the outbreak, says there may be a need to impose tighter rules in the face of violations. Speaking to Sabah newspaper, Tezer urged people to stay home. “You cannot say nothing will happen to you. You have to give up the mindset of ignoring rules. You have to stay home, to be cautious about social distancing. If you don’t, we will have more cases. It is vital to be careful at least until the end of April. This will give us an outlook on the course of the pandemic. There is China as an example where a very good quarantine allowed the outbreak to be taken under control. On the other hand, carelessness in Italy and Spain worsened the situation. People have to be patient so we won’t have a worse situation in our hands,” he said. Professor Levent Yamanel, another member of the board, said there was not a proven finding that the virus would lose its impact when temperatures rise. “It can continue very well into the summer. Hot weather means fewer respiratory infections but this is a global pandemic and its circulation may continue independent of weather conditions,” he said. Yamanel warned the public not to mingle in crowds and to maintain a distance of 1.5 meters from others. “Don’t be captivated by the hot weather and go out. We can only overcome this process by adhering to rules,” he said.

The pandemic risk also lurks in migration from cities to villages as evidenced recently with a surge in traffic out of big cities and to small towns and villages just before an intercity travel ban. In the Black Sea region, where highlands, with their cool weather, attract city dwellers, migration started one month earlier than usual. Leaving crowded cities, people increasingly headed to the countryside, putting the elderly population in villages and highlands at risk. Experts called for additional measures to be taken in the populated areas of these locations. Professor Nazım Ercüment Beyhun, a public health expert at Karadeniz Technical University, says villages are more populated with senior citizens who are particularly vulnerable to COVID-19. “They live in closer quarters and people tend to ignore social distancing, leading a faster spread of the virus. We have seen villages placed under quarantine and this points out to an ongoing risk,” he told Demirören News Agency (DHA) on Friday. Beyhun said the number of health care staff in places with smaller populations is lower, in accordance with the number of people living there, and a sudden surge in cases puts an extra burden on them. “We will wait and see how people will limit their mobility in villages but if they fail, there will be more risk for the elderly people,” he said. Ebru Sivri, head of Chamber of Physicians in the Black Sea province of Trabzon, said people frequently visit each other in villages despite the virus threat. “People play down the risk but there should be more measures. Village administrators can lead the efforts; they can warn people to stay home at least,” she said.

Turkey's coronavirus death toll rose to 908 with 96 new casualties on Thursday. The total cases, in the meantime, topped 42,282 with 4,056 new cases, Health Minister Fahrettin Koca announced on Twitter Thursday. Koca said 2,142 people were discharged from the hospital. He added that Turkey was about to reach its goal of running 30,000 tests daily. “Despite the increasing number of tests, the number of new cases has seen a downward trend. The virus gains its strength from contact. Stay home,” Koca tweeted. The country has so far conducted 276,338 tests.

"Turkey is an exemplary country thanks to its diagnostic capacity and tremendous efforts in treatment in its fight against COVID-19," Pavel Ursu, the WHO's representative for Turkey, said on Twitter.

On March 11, Turkey became the last major nation to report a coronavirus case and confirmed its first death from the disease on March 17, an 89-year-old man.

Since then, the authorities have tightened restrictions to stymie the spread of the virus, including shutting down nonessential businesses, shopping malls and intercity travel.

Free masks for all

As of Friday, Turkey has also started delivering free masks via the country's pharmacies. In order to obtain the masks, residents must simply present their IDs and code sent by the Health Ministry via text. In Istanbul, 2.5 million masks have been delivered to 5,200 pharmacies, with more planned ahead, officials have said. Citizens will be entitled to five masks for every 10-day period. Turkey has already started delivering free masks to those applying online, with the Postal Directorate tasked with delivering masks directly to homes. Those aged 65 or above and those with chronic illnesses, who are subject to a curfew, began having free masks and disinfectant cologne delivered to their homes by police earlier this week.