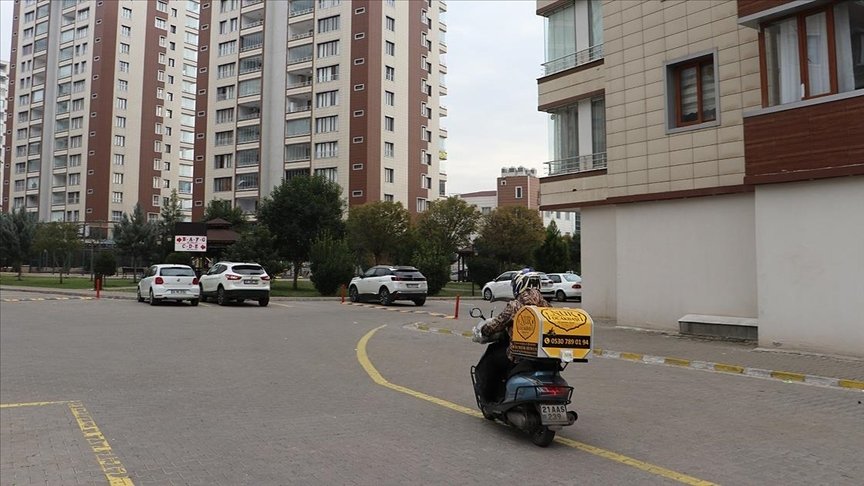 As e-commerce sees a boom and most businesses switch to home-delivery models, motorcycle couriers are among the most sought-after people during the coronavirus pandemic in Turkey.

They work during curfews, in icy weather and amid tight measures to protect themselves from the virus. Motorbike delivery drivers have become the backbone of Turkey's supply chain mechanism, bringing food, medicine, masks and other essential items to your door, just a phone call away. But many of them complain that their courier service has gone unrecognized, despite their work sustaining e-commerce.

Speaking to Anadolu Agency (AA) on Friday, Abdullah Ergun, a 27-old driver, said that while rushing deliveries to customers in recent months, he had narrow escapes from death on at least two occasions. A two-year veteran delivery man for a local pizza parlor in the capital Ankara, he said the workload has doubled since the start of the pandemic.

"Consumption habits of people have dramatically changed since March, as many people prefer to stay at home for fear of getting infected," and restaurants are largely closed, he explained. "This means more people order online food, and I had to work much harder and faster."

Out of fear of losing his job and to keep up with the relentless pace of orders, sometimes he has been forced to drive recklessly. "I had at least two near-death experiences this year alone, as I was trying to rush to deliver orders and meet deadlines," he said. "Thank God nothing serious happened, but some of my colleagues weren't so lucky, as one lost his life following a collision with a cab."

Despite risking his life for the sake of quick deliveries, some customers treat him badly, he said, as if he was just some "pack animal," with no thought for his tireless efforts to keep the economy alive. "You know what hurts the most? The customers who don't even bother to say hello at the door when I deliver their food or goods," Ergun lamented. "They don't understand how I'm contributing to their lives. A simple gesture would be more than enough, yet they shut the door in my face without saying a single word."

Mehmet Baran, 21, another dedicated courier, said earning a living on a two-wheeler is both challenging and physically demanding. "Some of the businesses cut the number of employees. The elevators in many buildings don't work as well as they used to, meaning I have to climb floor after floor to deliver orders," he said. "Repeat this multiple times during the day, and you'll understand how difficult the job is."

Despite the hard work, Baran said some customers treat him rudely if he shows up only a few minutes late. But, he added, there were others who respect and appreciate him and reward him with good tips. "The personal character of customers has a lot to do with whether I feel good or bad at the end of my shift. Some are downers, but some are sympathetic," he said. "I guess the service sector is one of the most difficult sectors, especially in the time of the outbreak."

Working as a motorbike courier can be one of the most dangerous jobs in urban areas, as other drivers often fail to respect bikers, and the possibility of crashes is high.

"We hear about a motorbike courier crashing every week, some are small but some are fatal," Baran said. "In 2020 the number of crashes rose, probably due to the virus as we carry more items and try to work faster to meet the demand."

"In the winter, slippery roads due to rain and snowfall add to our miseries," he added.

Weekend and nighttime curfews, however, have eased their job to a certain extent, he said. "There's hardly any traffic on weekends, allowing us to do the job safely," said Baran. "It's every biker's dream to ride on empty roads. I will never forget the joy of driving during weekends."