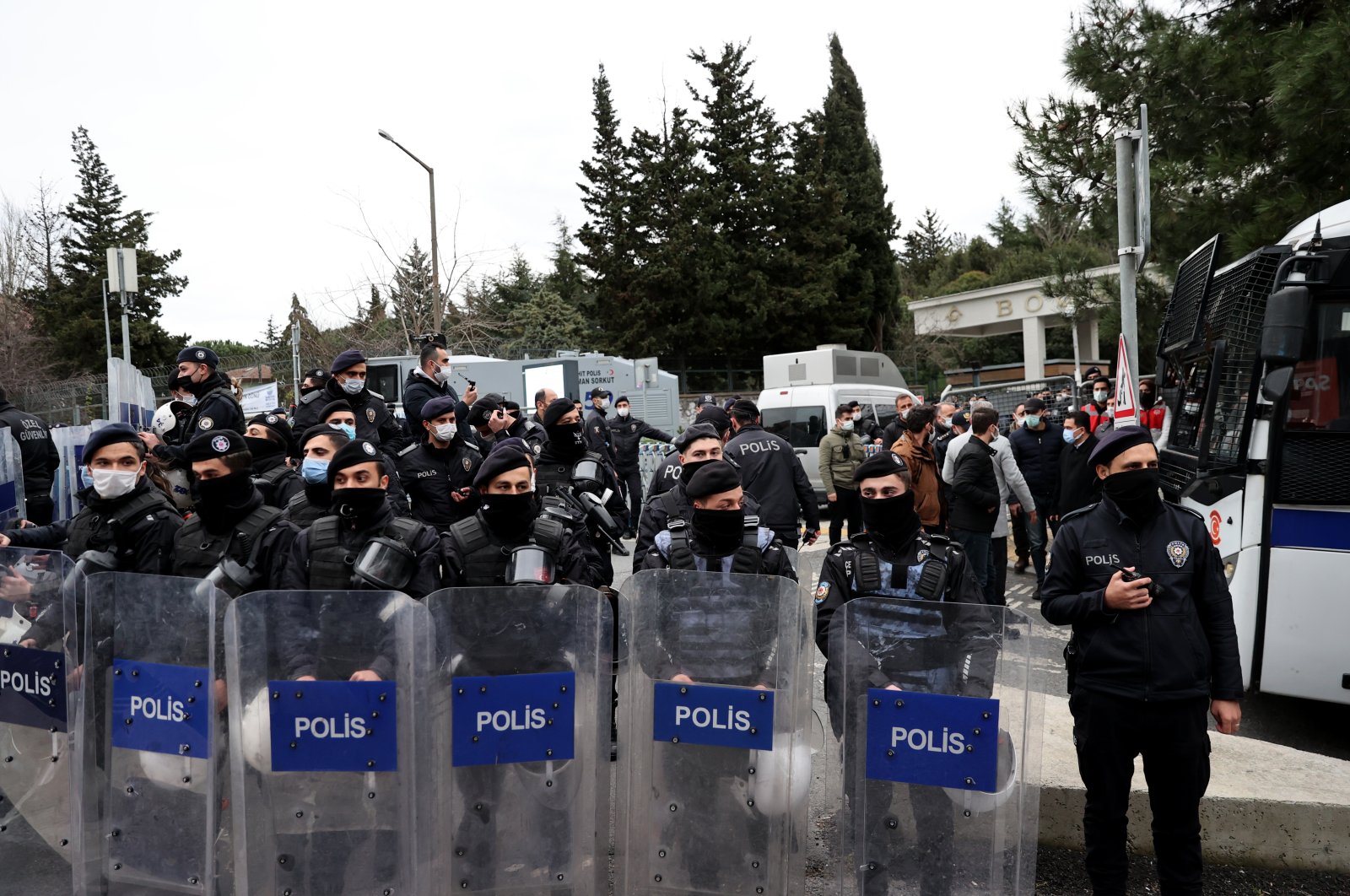 Istanbul’s prestigious Boğaziçi University, which was the scene of violent protests last month, is once again at the center of a row. Just as protests against the appointment of a new rector relatively died down, a new incident and subsequent outcry prompted new protests at the campus. Over the weekend, four people were detained when they unfurled a picture depicting the Kaaba, Islam’s holiest site, with LGBT flag.

A group of protesters tried to occupy the campus on Monday but met with police resistance. One hundred-fifty-nine people were detained while police announced on Tuesday that 98 among them were released.

Authorities say the majority of protesters are not affiliated with the university while President Recep Tayyip Erdoğan has underlined after last month’s protests that some terrorist groups exploited the protest, to stage riots. The Istanbul Governorate on Tuesday announced that only seven among 108 detained on Monday were the university’s students while 15 others were not university students at all. Fifty people who were detained for trying to occupy the rector’s offices were the university’s students, the governorate said.

The first protests broke out after professor Melih Bulu was appointed by Erdoğan as the new rector of Boğaziçi University, which was founded in the 19th century as Robert College – the first American university outside the United States. Though the president is authorized to appoint rectors to the country’s universities, Bulu faced an unprecedented reaction at Boğaziçi, which has been home to anti-government protests in the past. The rule regarding rectors’ appointment by the president came into force in 2016, and since then, the calls had been mounting for the reintroduction of the former practice of rector elections. Currently, the Council of Higher Education (YÖK) supervises the selection of three candidates for the rector’s post and presents it to the president for approval of one of the three.

As the protesters opposed the arrests of four people over the weekend for the LGBT poster, critics of the action, meanwhile, denounced what they called an insult to Islam and Muslims. Several protests were held in Istanbul against the incident. Two of the four people who were detained were charged with “inciting hatred” while the others are under house arrest.

Interior Minister Süleyman Soylu, whose tweet announcing the arrest of “LGBT perverts” was blocked by Twitter, has called upon Boğaziçi students “not to fall into trap of politicians who even failed to be true leftists,” in another message on the social media platform. He was apparently referring to lawmakers from the People’s Democracy Party (HDP) who accompanied protesters. He said they would not tolerate insults to Kaaba and the occupation of the rector’s office.

Erdoğan did not comment on arrests and ensuing protests much but said that the Turkish youth should be “a youth repairing broken hearts.” “You will carry this nation to the future with the power of our glorious past,” he said on Monday at a meeting of the ruling Justice and Development (AK Party).

On the other hand, Devlet Bahçeli, head of the Nationalist Movement Party (MHP), denounced the “lowly attack” on the Kaaba, saying its perpetrators had “nothing to do with education.” He also backed police intervention in the incident, something he described as a move “to not to give room to terrorist groups,” in a tweet on Monday.

In the meantime, a hashtag, #AşağıBakmayacağız (We Won’t Look Down), went viral on Twitter on Tuesday. The tweets were critical of the police response to protests, sharing a video allegedly showing police officers telling protesters to “look down.” Police countered by posting another version of the video where officers are heard saying “down, down” to direct protesters to another area, “down” from their current location and urging them not to “move en masse.”