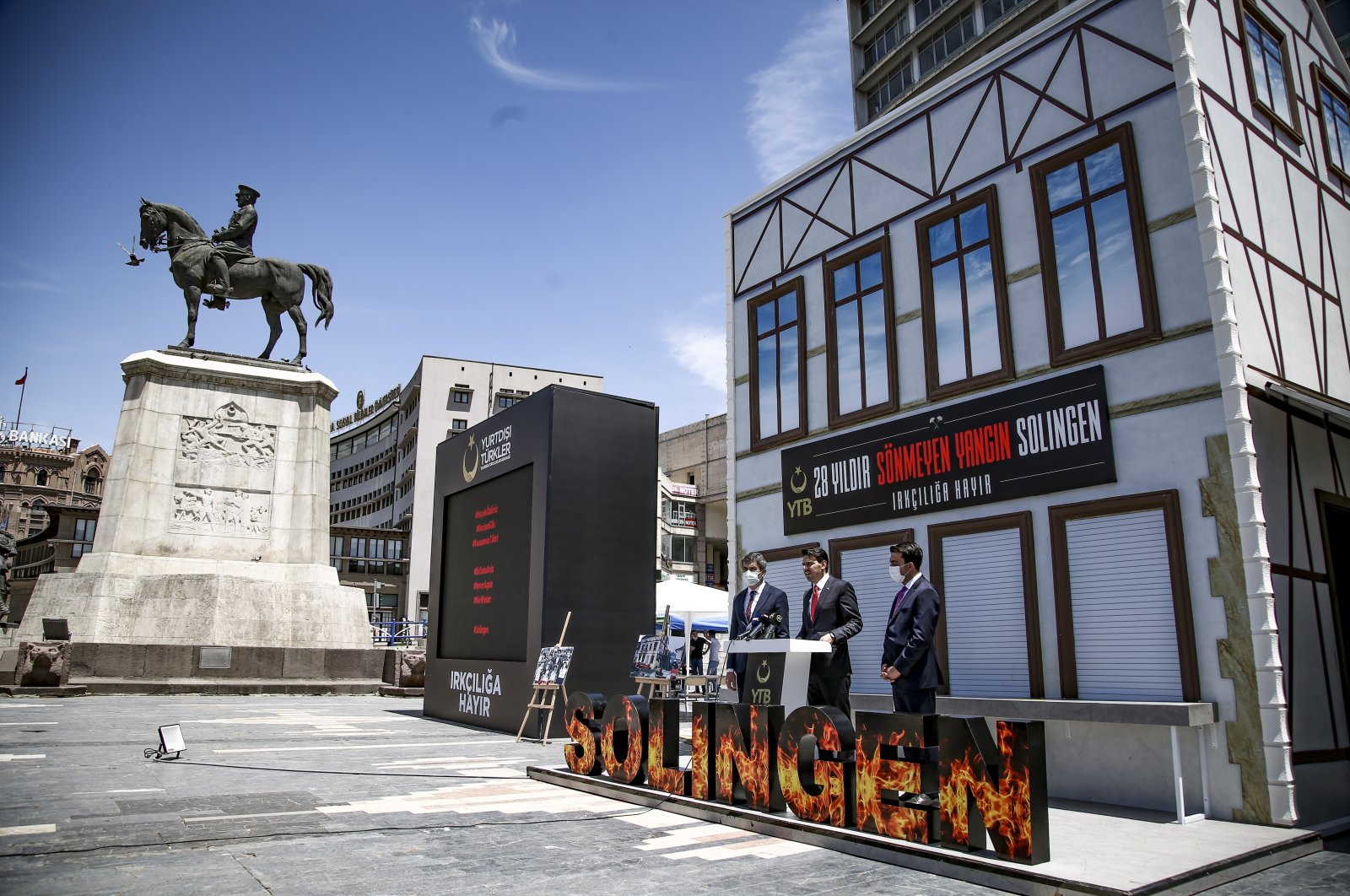 An event held in Turkey's capital, Ankara, on Friday commemorated a family killed by far-right extremists in Germany’s Solingen on May 29, 1993. A small replica of the house was erected at the capital’s Ulus Square by the Presidency of Turks Abroad and Related Communities (YTB) to raise awareness of Germany's neo-Nazi violence, which often targets Turkish diaspora.

Four men with neo-Nazi ties set fire to the house of the Genç family. Three girls and two women in the house were killed while 14 others, including children, were injured in one of the deadliest and brazen attacks by neo-Nazis against Turks, who constitute the largest minority in the country. In the aftermath of the attack, large-scale demonstrations were held across Germany against xenophobia. Two years later, the perpetrators were convicted of arson and murder and were sentenced to prison terms between 10 and 15 years. At the time it was the latest lethal attack targeting the Turkish community, who lost three members in November 1992 in another arson attack in Molln.

The “house” set up in Ankara is among a series of events organized to remember the incident by YTB and raise awareness of xenophobia and anti-Muslim sentiment in Europe. A guest book was placed in front of the house for visitors to share their thoughts on the matter.

Speaking at the ceremony at Ulus Square on Friday, YTB chair Abdullah Eren said the tragic incident’s aftermath also became a symbol of tolerance with the stance of Mevlüde and Durmuş Genç, who lost their daughters, grandchildren and a nephew in the attack. “Aunt Mevlüde inspired us with her remarks after the attack, when she said the love keeps people alive and hatred kills them and by calling on everyone to harbor love toward each other,” Eren said.

“Throughout their 60 years in Europe (as ‘guest workers’), the Turkish diaspora has been an inseparable part of countries where they live with their values and tolerance for co-existence. Aunt Mevlüde is now an envoy of love in Germany as she called for unity between the Turkish and German communities instead of harboring hatred. Today, she inspires us to strengthen the bonds between the Turkish diaspora and the communities where they live, to prevent it from being poisoned by racism,” he said.

Eren remarked that the Solingen attack traumatized diaspora, forced them to keep night watch in their neighborhoods, to remove Turkish names from the doorbells and to keep water on their balconies in case of arson. “It hurt the sense of belonging they felt in the countries they lived. Unfortunately, it was not the last attack. We lost eight people between 2000 and 2006 in murders committed by the National Socialist Underground (NSU) terrorist group,” he said. Eren said the number of people killed in racist attacks in Germany reached 213 while there were more than 900 anti-Muslim crimes recorded in Germany last year.

The Turkish community in Germany, one of the largest with a population of over 3 million people, grew out of small groups of Turkish "guest workers" brought in to rebuild post-World War II Germany. Over the decades, they rose to a prominent place in the society, but neo-Nazis posed as a major threat to the community, preying upon xenophobia or rather, anti-Turkish sentiments, evident in attacks specifically targeting the Turkish community. Neo-Nazi groups, to which authorities turn a blind eye most of the time, are responsible for a range of crimes, from minor acts of vandalism of Turkish mosques to serial murders.