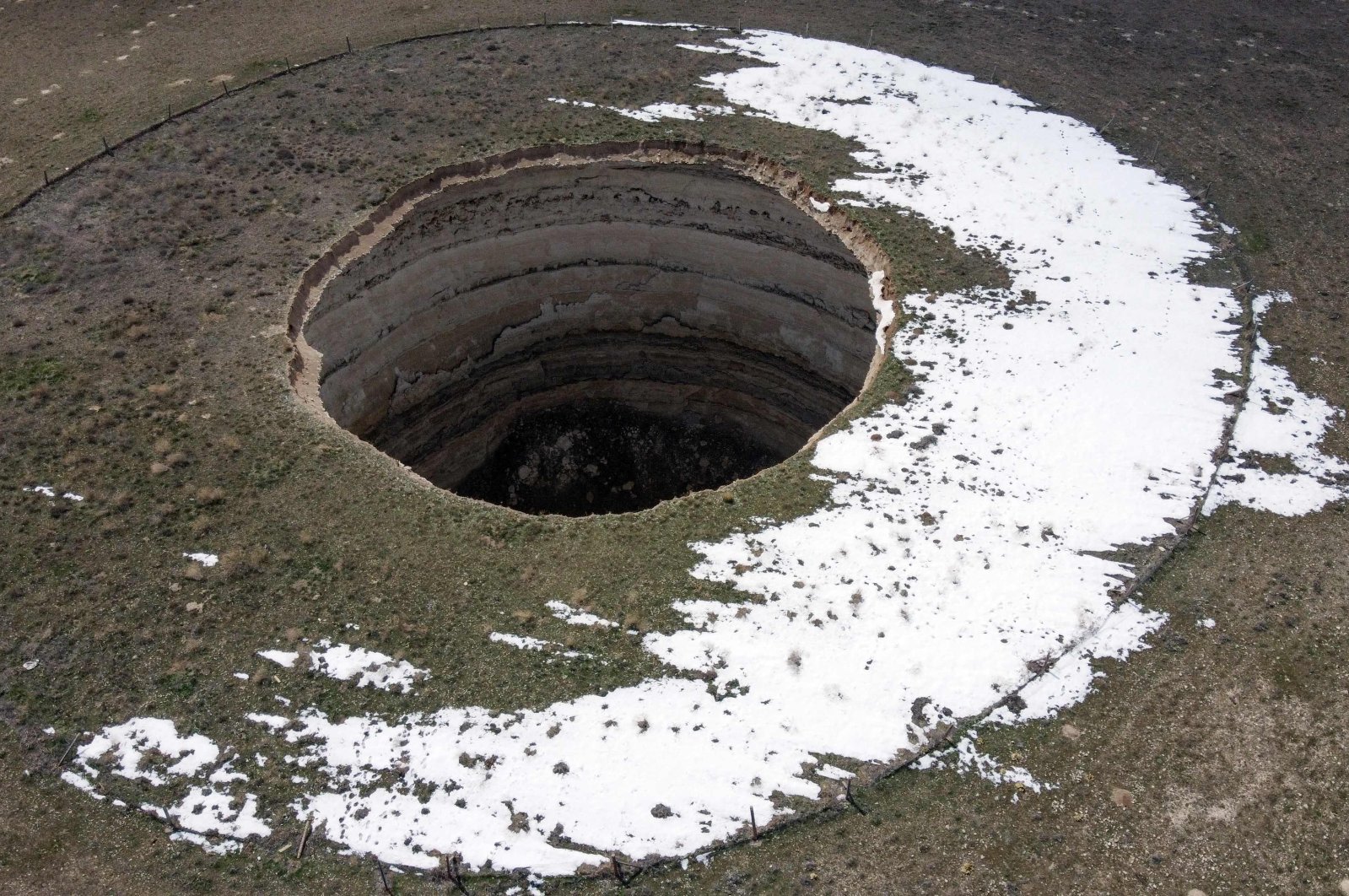 Sinkholes are a natural phenomenon but few things about them are "natural" in the broad sense of the word. Indeed, they are mostly the fault of humankind. Droughts brought on by climate change – which is linked to humankind's actions – force people to resort to the aggressive draining of underground water and eventually, this causes sinkholes to emerge. For the central province of Konya, the situation is grim.

Sinkholes wide enough to swallow a bus dot this drought-stricken breadbasket of the Turkish plains, worrying farmers as they spread and creep closer to residential homes.

"The drought situation is getting worse," said farmer Tahsin Gündoğdu, whose harvest includes potatoes that he sells to the United States food giant PepsiCo Inc. The 57-year-old has seen the huge holes yawn open in the past 10 to 15 years as the overuse of groundwater for irrigation takes its toll. Dizzyingly deep, they appear when underground caverns created by drought can no longer contain the weight of the layer of soil above. This puts farmers in a bind. Attempts to get water by other means are more expensive, cutting farmers' incomes. But continued reliance on groundwater will likely make the problem only worse.

Professor Fetullah Arık has counted around 600 sinkholes in the Konya plain, where he heads the Sinkhole Research Center at the Konya Technical University – nearly double the 350 counted last year.

Experts want the government to do more to address extreme drought, blaming the lack of a proper water management policy for Turkey's woes. Trying to cut groundwater use, farmers have been forced to water their fields more, leading to higher electricity bills. "We usually would water the land twice a year but now we're doing it five or six times," said Hazım Sezer, a 57-year-old farmer in Karapınar. But Gündoğdu said some farmers still turn to illegally using groundwater for their crops. If not addressed, drought will hurt farmers and consumers "as much as, if not worse" than the economic shock of the coronavirus pandemic, said Baki Remzi Suiçmez, head of Turkey's Chamber of Agricultural Engineers (ZMO). "Until last year, we had never seen a drought like this," farmer Kamil Işıklı agreed, adding he was more optimistic for 2021 after rain fell earlier this year. "Farmers no longer have enough money from one month to the next to pay their bills," Işıklı said. "They can't afford anything anymore."

Sezer urged the government to create underground systems that redirect water to the plains that would otherwise end up in the seas. Murat Akbulut, head of ZMO's Konya branch, said this could offer a "significant solution" for Konya, whose Beyşehir Lake has seen its water reserves shrink to 123 million tons from 450 million tons in 2020. This drop "will lead to real irrigation issues for the plain," Akbulut said. Nearly 77% of Turkey's water is consumed by the agricultural sector, Suiçmez told Agence France-Presse (AFP).

Turkey is actually facing two types of drought. The first is meteorological, due to dry weather, and the second is hydrological, which means water levels are low in streams, reservoirs and groundwater levels. President Recep Tayyip Erdoğan hosted his first water forum last month, promising to "renew and improve the agricultural irrigation systems." Suiçmez said a lot depended on the weather in April and May, because "if there isn't enough rain in those months, in nearly all areas where there is dry farming, the risk of agricultural drought will continue." But even abundant spring rain will not make the problem go away, Suiçmez warned.

This winter also saw fears over low water levels in dams, although Agriculture Minister Bekir Pakdemirli insisted last month the problem had been solved by rainfall. He also suggested Turkey was primarily suffering from the effects of rising temperatures and climate change. But Suiçmez said while this was true, it was "not right" to blame everything on global events. "We cannot say: 'Oh there's climate change, that's why there's drought,' when there are concrete reasons for it," Suiçmez said.

The drought's impact is felt especially severely in the lakes region of Turkey's southwest, geology engineer Servet Cevni said. Experts warn Salda Lake, which NASA believes could provide clues to a crater on Mars it has just started exploring with the Perseverence rover, is also suffering. Described as "Turkey's Maldives" because of its turquoise waters and white sand, its shoreline has receded by up to 30 meters (around 100 feet) in the past 10 years, according to the local mayor. "We don't have a single lake that we can say is in a good state in terms of water in Burdur province. They're either at risk or in a really bad state," Cevni said. The larger Burdur Lake closer to the city center has seen water recede by 11 kilometers (6.8 miles), he said, stressing the need for an "urgent water policy." "Wasting water is as serious an issue as killing someone. The punishments should be just as serious," he said.