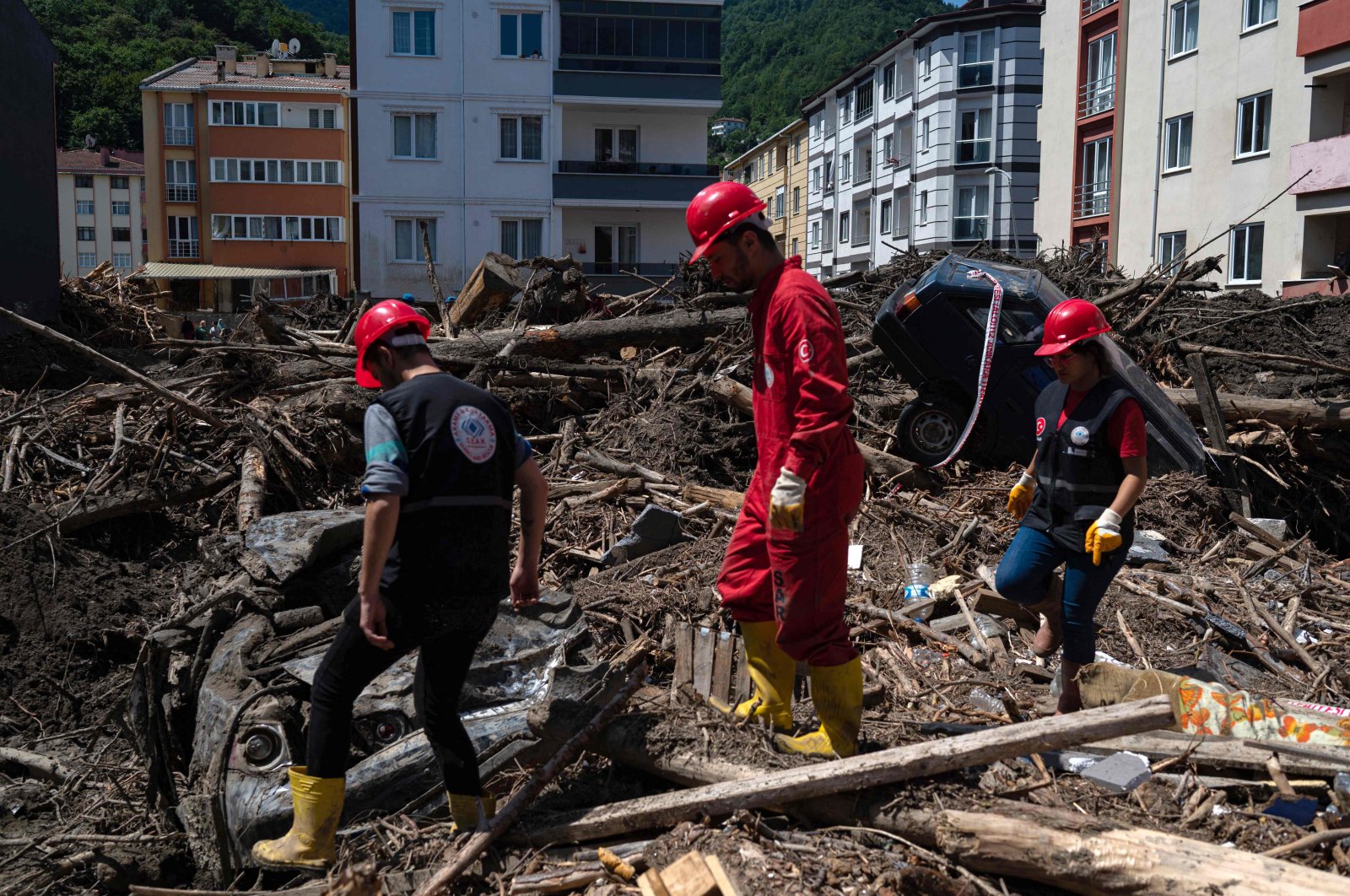 Civil defense workers walk through the mud and debris after flash floods destroyed parts of the town of Bozkurt in the district of Kastamonu, in the Black Sea region of Turkey, Aug. 15, 2021. (AFP Photo)
by Agencies Aug 22, 2021 1:06 pm
RECOMMENDED

Currently, more than 10,000 public sector staff are working in flood-hit areas in Kastamonu, Sinop and Bartın, for search and rescue and cleaning and recovery efforts.

In addition to the personnel, 37 ambulances, four helicopters, unmanned aerial vehicles, boats, and search and rescue dogs are also participating in the efforts.

The Disaster and Emergency Management Authority (AFAD) announced that 70 people were killed in Kastamonu province, 10 in Sinop and one in Bartın.

The Aug. 11 floods were particularly devastating for the Bozkurt district of Kastamonu, Ayancık of Sinop and some villages of Bartın. Hundreds of search and rescue workers are still combing the flood-hit areas for the missing, more than one week after raging floodwaters collapsed buildings, tore apart bridges and destroyed roads.

Deputy Interior Minister Ismail Çataklı, who was in Bozkurt, said they aimed to conclude the cleanup work within 10 days. Çataklı told Demirören News Agency (DHA) that bad weather had hampered work in the initial days of floods but crews managed to evacuate some 2,288 people in Bozkurt. Evacuees were being placed in local dormitories and tents brought in by the AFAD.

Çataklı said that although the debris was largely cleared off the streets, buildings were still clogged with mud and debris and it would take time to entirely clean them.

Locals, joined by volunteers, soldiers and AFAD staff, are working hard to clean up the debris. Buildings that were heavily damaged in the floods are also being demolished. Fifteen buildings have been demolished in Kastamonu so far.

Some of the province's casualties were due to the collapse of buildings on the banks of a stream. A contractor who carried out the construction of one of the collapsed buildings was also detained recently on charges of negligence for faulty construction. Officials say 295 more buildings in Kastamonu, Bartın and Sinop that sustained heavy damage in the floods will be demolished.

President Recep Tayyip Erdoğan visited flood-hit areas last week and pledged assistance for the survivors. Erdoğan has said during his visit that the affected provinces were declared “disaster zones,” which means compensation for losses and other assistance to locals will be covered by the state.

“Our country is battling disasters like the rest of the world. We are facing every kind of catastrophe. I hope we will overcome them with minimum damage,” he said, referring to a recent spate of wildfires that raged across the country’s south.

Turkish charities and municipalities are also in the region to deliver aid to the displaced.

In towns where roads were heavily damaged, people formed human chains to deliver water and other basic needs to residents through primitive bridges set up over roaring streams.

Turkish Red Crescent (Kızılay) Chairperson Kerem Kınık said they deployed about 300 people in three provinces affected by floods and were delivering meals every day to thousands in Bartın, Sinop and Kastamonu. He said floods had damaged the water grid in the region and the charity was also distributing clean water to locals. "We also dispatched psychiatry experts to help the survivors cope with the trauma of this disaster," Kınık said.