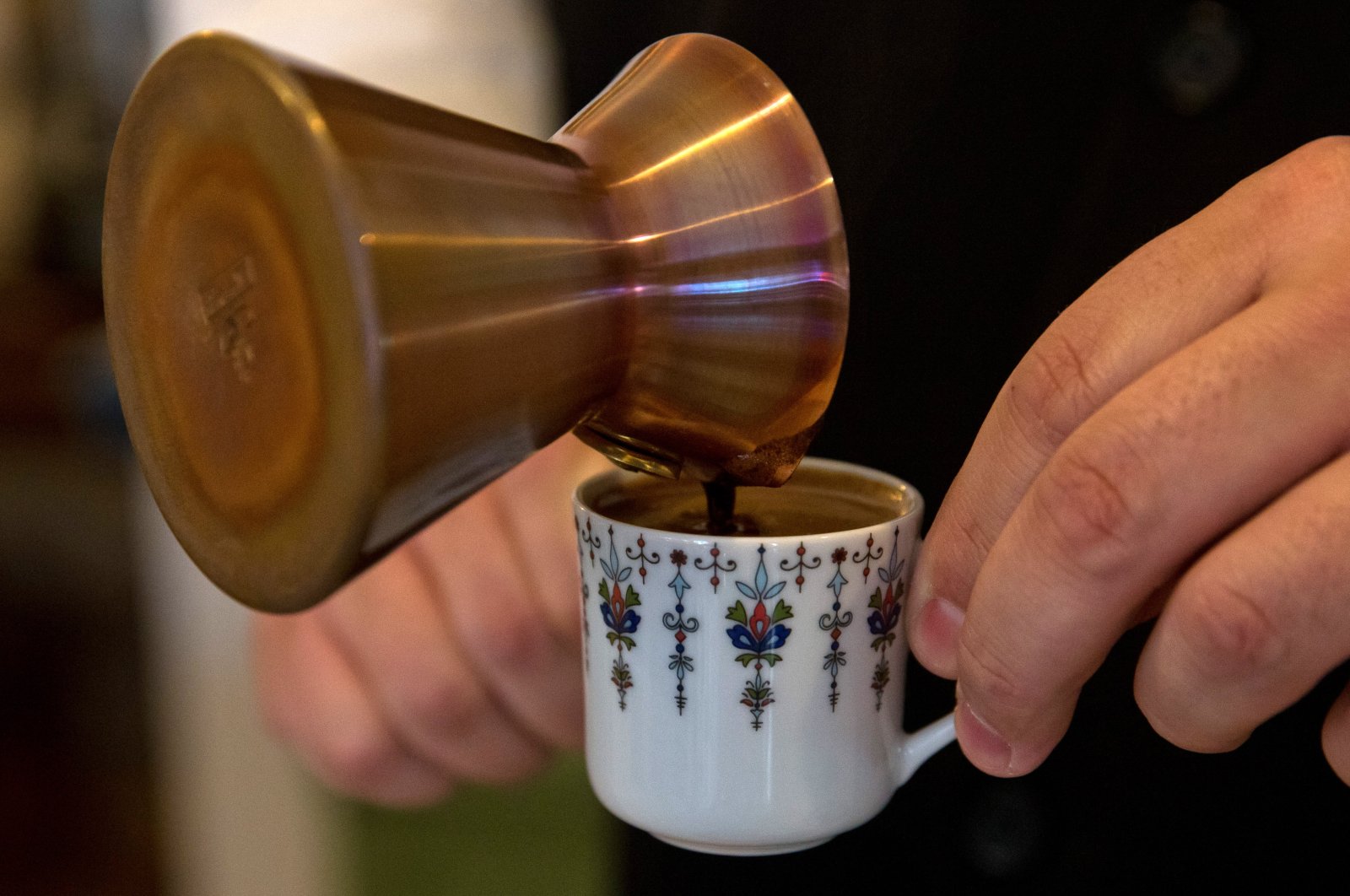 A man makes Turkish coffee in a cafe at the Crimean Tatar Ethnography Museum in the city of Bakhchisaray, southern Crimea, May 3, 2021. (Getty Images)
by Anadolu Agency Dec 02, 2021 10:18 am
RECOMMENDED

Turkey wants Dec. 5 to be celebrated as Turkish Coffee Day, giving the traditional beverage the standing it deserves worldwide, Turkish businessperson Murat Kolbaşı said as he invited everyone to New York City's Times Square to taste the brewed drink on Dec. 5.

Murat Kolbaşı, chairperson of Arzum Electrical Home Appliances and a member of the board of directors of the Turkish Coffee Culture and Research Association, told Anadolu Agency (AA) that coffee bean companies recognize Turkish coffee's place.

Kolbaşı explained that coffee beans can only be grown in tropical countries on the equator but 80% of this business is scattered all over the world. He explained that countries like Switzerland, Germany, the Netherlands and the United States carry out the processing, selling and distributing of coffee.

“We would like to enable Turkish coffee to be tasted in Times Square by everyone who is in New York on Dec. 5. We did it on a different date previously, but now Dec. 5 is very important for us. This project was developed this year. We are very firmly prepared. I ask every Turkish citizen who goes abroad, even if you don't see Turkish coffee on the menu in a cafe or restaurant, ask for it. Turkish coffee will appear on that menu somehow. This is a national consciousness. In order for us to do this, we must persistently ask for Turkish coffee abroad,” said Kolbaşı

“We have companies that make very good Turkish coffee, cups and machines. Let's get it all over the world together. We want to spread our coffee by fortune-telling because the fortune teller culture is widespread abroad. It attracts a lot of attention,” he added.

Explaining why Turkish coffee is not as common as espresso, Kolbaşı said: “This is about the late start of the electric heating method. The ability of electrical appliances to heat water and make coffee or tea quickly dates back to the 1890s, the first kettle ... The first filter coffee machine in the 1920s, espresso in the 1940s ...This is also the case in the 2000s. It was very difficult to make Turkish coffee with an electric appliance, outside of the stove, until 2002.”

“Still, Turkish coffee is different from the machine-oriented habits of coffee shops in the world,” he added.

Noting that it has now become very easy to make Turkish coffee all over the world, he said currently 15 Turkish brands and five international brands are manufacturing Turkish coffee machines.

Kolbaşı added that according to their research, Turkish coffee comprises 10% of the total global consumption of the beverage.

The Turkish Coffee Culture and Research Association was established in 2008 to remind people of the significance of Turkish coffee in Turkey and applied to UNESCO, he said.

"For the first time in history, UNESCO registered a liquid drink as an 'intangible cultural heritage' on Dec. 5, 2013, in the Azerbaijani capital Baku. Greece and Italy objected while this was being done there. Italy said to us: 'You have come with such a file that if we object, you will take the espresso away from us.'"

"We have assets such as Turkish coffee and Turkish delight that have a Turkish name attached to them and are very well known in the world. The collaboration of any company that has become a brand in the world with the culture in the country where it is located provides significant benefits in terms of perception," said Kolbaşı, noting that cultures and brands develop hand in hand.

"No one should give up on other coffees but give Turkish coffee the place it deserves. Because besides the fact that many other types of coffees are available today, Turkish coffee has a history dating back 600 years," he added.