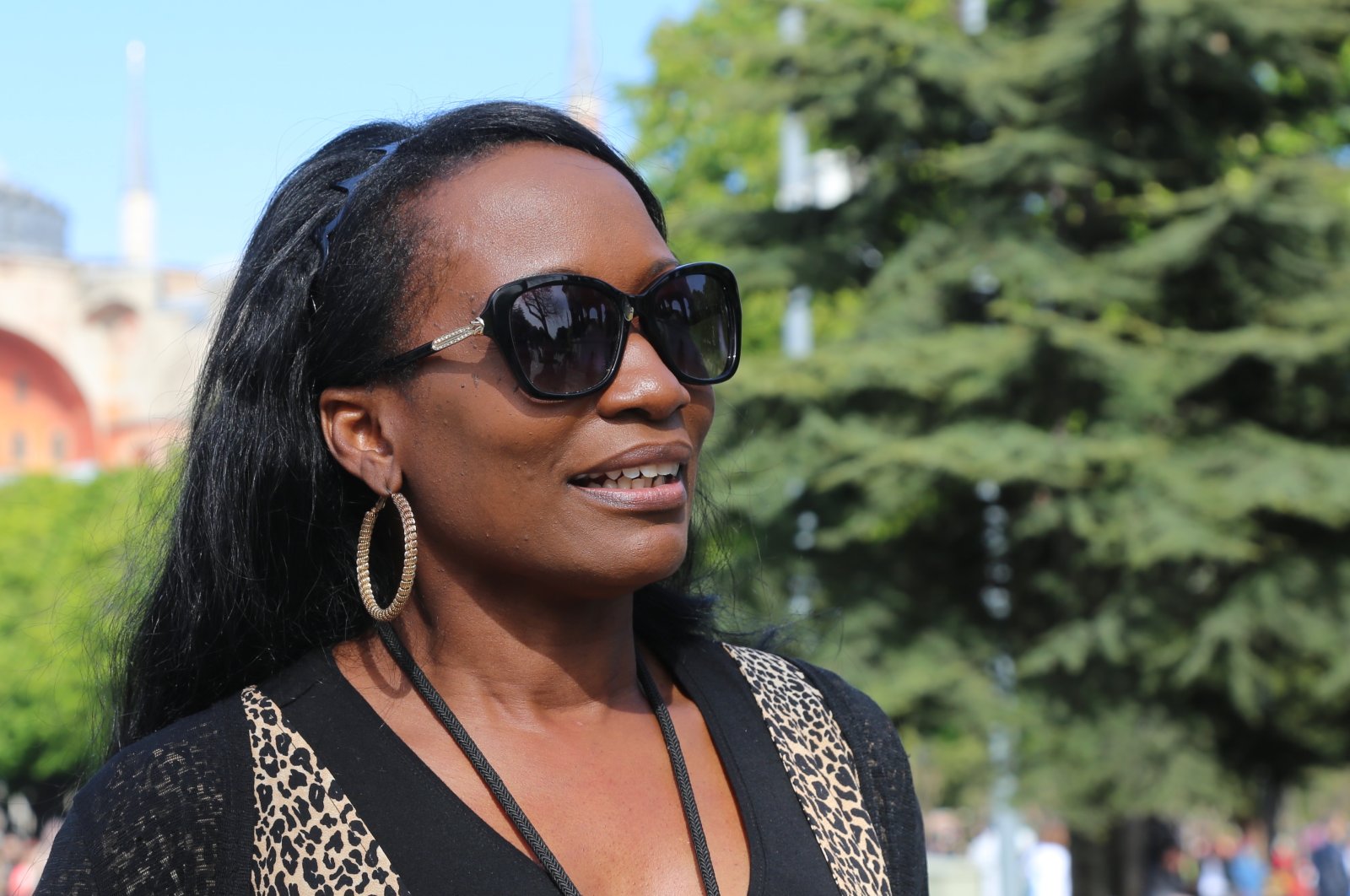 American singer, songwriter and long-time vocalist of Michael Jackson and Whitney Houston, Della Miles, speaks to media during her visit to Istanbul, Turkey, May 23, 2019. (AA Photo)
by Leyla Yvonne Ergil Jul 08, 2021 8:50 am

Della Miles is an internationally acclaimed singer-songwriter who performs all over the world. Luckily, she also happens to be an American expat residing in a town along Turkey’s southern coast. You can catch her performing this summer in Bodrum, Adana, Berlin and more. I had the opportunity to sit down with the artist herself in her hometown in Turkey to discuss her musical career, how it landed her in Turkey and her daily life in Dalyan.

With countless albums and compilations to her name and a career spearheaded by being the backup vocalist to Whitney Houston leading to headlining performances worldwide, Della Miles is an accomplished and full-time singer.

Distinguished by the Dalyan River and the spectacular backdrop of the Kaunus rock tombs carved into the mountain, Dalyan is a picturesque town in Muğla’s Ortaca district that in addition to having spectacular archeological features and being surrounded by nature, is also home to one of the most significant breeding grounds for nesting sea turtles, which specifically frequent the neighboring Iztuzu Beach in the summer months.

Della’s daily life these days has been rowing to town for necessities and a cup of coffee and tending to her home on the river with her ducks and chickens. She even sees the occasional turtle come up to her dock, she tells me over coffee in Dalyan.

I am lucky to catch her, as she is about to embark upon a whirlwind summer of weekly concerts at Lujo in Bodrum, a performance with the symphony this week in Adana and shows lined up throughout the summer in destinations in Europe. Life has not been like this for a while for full-time musicians such as Della, but with countries opening up, she is grateful for the opportunity to perform and be on the road again. Before the pandemic, Della split her time between Germany and Turkey flying to destinations throughout the world to perform.

Ever since COVID-19 hit, she has been relaxing at her home in Dalyan, with her husband, a retired doctor. Unfortunately, he fell ill due to the virus near the end of last year and was only released from hospital last month. A heart doctor with a heart condition, the virus struck Della’s husband hard and he spent over five months admitted to hospital, struggling with the virus and its side effects, mainly having a persistent low oxygen level.

For Della, whose life is usually on the road and spent more in hotels than at her homes in Germany and Turkey, the past year has offered her a change of pace. Originally hailing from Houston, Texas, Della got her start playing the lead in “Sisterella,” a musical produced by the “King of Pop” himself, Michael Jackson. The show started in California, toured Europe and went all the way to Australia. After that, she landed the gig singing alongside Whitney Houston in her heydays. But alas, times change and Houston experienced a bump in her career, during which Della moved to Berlin, making a new base for herself, performing as a lead artist and creating a new life, in the form of giving birth to her son Dareios. Now 18, and going to school in Dubai, they visit one another frequently and he better get used to visiting Turkey as Della says her home in Dalyan is where she wants to retire.

While Della has come to Turkey regularly to perform over the years, it was meeting the man that would become her husband at the airport on the way to Çeşme that determined her fate of eventually making this country her full-time home. Della says she knew he was the man she was going to marry the first moment she saw him and recalls with a smile that he in fact proposed three days later. This was nearly 10 years ago during the time she spent two summers performing at the Monk in Çeşme, where conveniently, her future husband also had a summer house.

Della now has two bands one in Germany and one in Turkey that put on full productions. She is regularly joined onstage by five musicians, three backup vocalists and even two dancers. Throughout the summer, Della will be performing weekly on Saturdays at the ultraexclusive Lujo’s in Bodrum, which she has done for the past three years. In August and September however, her concerts will continue on Wednesdays to accommodate for her scheduled shows abroad.

This week Della has a special treat for those in Adana as she will be performing alongside the Çukurova State Symphony Orchestra in a performance entitled “Della Miles Symphonic,” which will take place at the Mimar Sinan Open Air Amphitheater in Adana Friday, July 9, as part of a summer concert series organized by the Ministry of Tourism and Culture.

While Della has a number of albums out with original songs she has written, her performances are mainly a medley of rearranged soul and rock and roll covers. “I do a lot of research for my repertoire to find some of those great songs in the world nobody knows about and then I make them mine,” she explained. “Jealousy” by Frank Miller is one such song. “It’s not a hit,” she tells me adding, “but I found it to be an amazing song and now people come to my concert asking for Jealousy.”

Della also performs a number of songs in Turkish, including “Yalnızım Ben” and “Git” by Murat Kekilli, whose album she also featured on in a duet of the song. Della is a big fan of Turkish powerhouse vocalist Şebnem Ferah and shares that it is her dream to meet her one day. In the meanwhile, she performs two of the Turkish female vocalist’s most beloved songs “Yalnız” and “Sil Baştan."

In conversation with Della, we touched upon the personal subject of faith and how she has decided to embrace Islam. “As a conscious decision, I knew for me it was the right choice. It’s in your heart, mind and soul and then slowly I start to learn more and more,” she explained. Della has hit the headlines in Turkey a number of times for her decision to convert as well as for complimentary comments she made on social media last year in spring that President Recep Tayyip Erdoğan, Health Minister Fahrettin Koca and Interior Minister Süleyman Soylu could impart valuable lessons on government and crisis management to Trump and his delegation given six months. Asking her to comment, Della said in reference to Erdoğan: “As a human being, as a man, he could teach how to just be polite. There are no politics in being kind.”