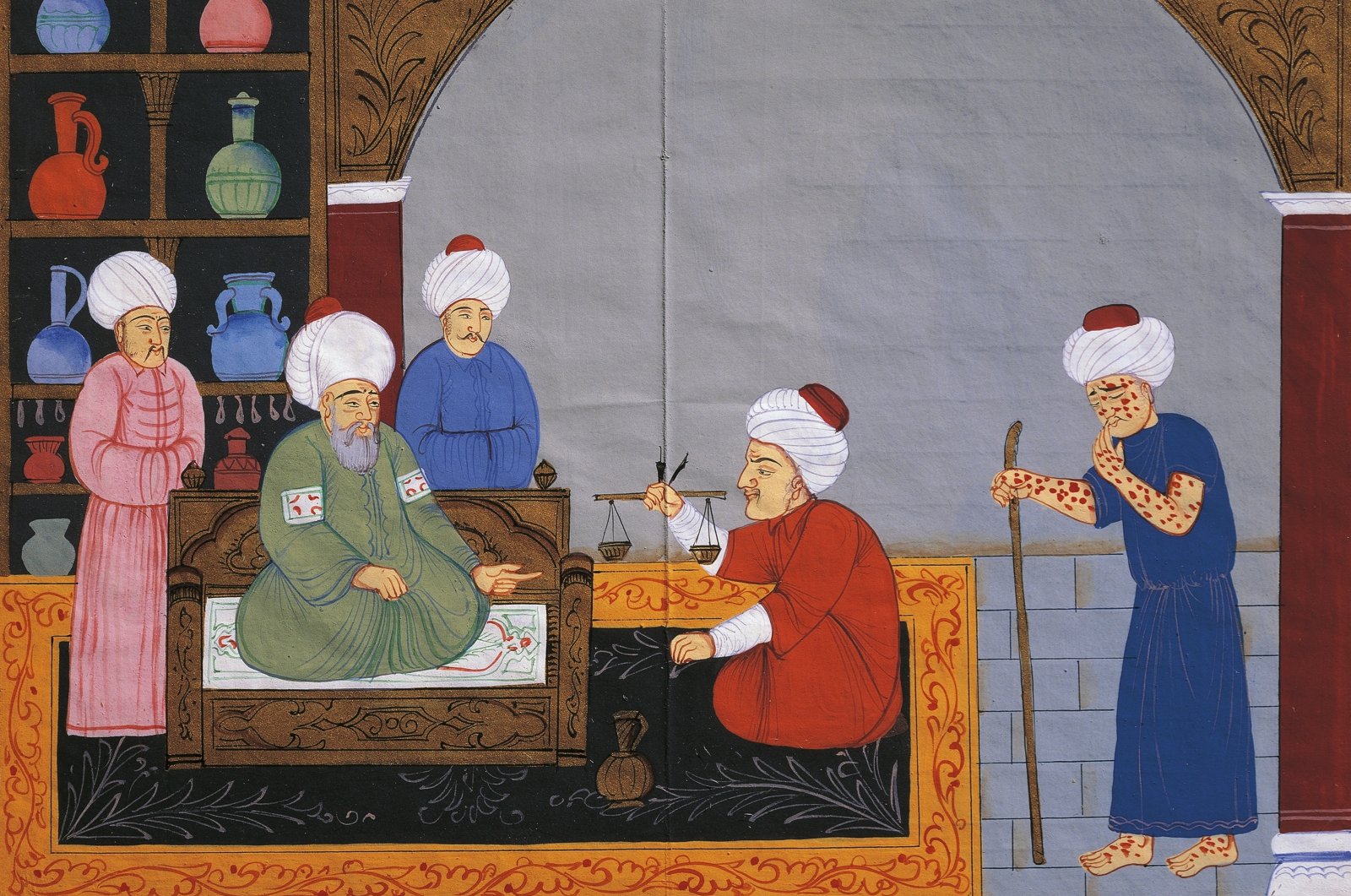 Preparation of medicines for the treatment of a patient suffering from smallpox, miniature from "The Canon of medicine," by Avicenna (980-1037), Ottoman manuscript in 17th century Istanbul. (Istanbul University Library/Photo by DeAgostini/Getty Images)
by Leyla Yvonne Ergil
Nov 12, 2020 12:45 pm

As the whole world is now talking about the most promising vaccine to date against the coronavirus set to be released by Pfizer in the next weeks, it has come to light that the brains behind the creation are a Turkish “super couple.”

The founders of BioNTech, which is partnering with Pfizer on the vaccine, said to be 90% efficient, are scientists Uğur Şahin and Özlem Türeci. Şahin was born in the southern city of Iskenderun but moved to Cologne when he was just 4, while his wife Türeci is the daughter of a Turkish physician and was born in Lastrup, Germany. Together, Şahin and Türeci have devoted their lives to developing immunotherapy treatments in the field of oncology and infectious diseases. Their groundbreaking research, which uses messenger RNA technology to spark an immune response, has become a beacon of hope for the world as one of the most promising methods to safely battle the highly contagious and debilitating coronavirus. In an article released by CNN, their discovery is referred to as “the greatest medical advance” by Pfizer CEO Albert Bourla. While this particular vaccine has gained the most traction and international acknowledgment, just last month Industry and Technology Minister Mustafa Varank announced that there were no less than three vaccines currently being produced in Turkey alone.

In light of the recent recognition of Turkey and the success of those of Turkish heritage in this particular global battle against the pandemic, it might be an opportune time to acknowledge some of the other unprecedented successes made on this unique and beautiful land of ours.

Coincidently, Turkey has a legacy with vaccinations and could arguably be credited with being the first to discover the practice. While English doctor Edward Jenner is cited as having created the first vaccination at the end of the 18th century, it is widely acknowledged that his finding came as a result of scientific observation of a practice that was brought to England from modern-day Turkey. Smallpox plagued humanity for over a thousand years, killing roughly three out of every 10 people infected with the disease. One such sufferer of smallpox was Lady Montagu, who arrived in Turkey in 1716 with her husband Lord Montagu, who served as the British ambassador to the Ottoman Empire. Learning the language and befriending a Turkish woman, Montagu discovered that local tradition was for locals to deliberately infect themselves and their children with pus from smallpox survivors to ensure they developed immunity to the fatal effects of the disease.

Speaking of vaccines, viruses and germs...

Born in the late 14th century, the Ottoman religious scholar Akşemseddin was, in fact, the first person to have ever documented the process of germs causing disease and infection between people by stating in his work "Maddat ul-Hayat" ("The Material of Life") that infection occurs through seeds that are living but are so small they are invisible to the eye.

It could very well be said that Aristotle, the ancient Greek philosopher and polymath who lived from 384-322 B.C. and is credited with creating the study of biology as we know it, as well as lexicons to document that knowledge, worked on his vast contribution to knowledge at his philosophical school in Assos, what is now present-day Çanakkale.

Concept of money created in Turkey

Present-day Turkey is credited with being the land on which the Lydians created coins made of gold and silver that were first minted by King Alyattes circa 600 B.C. in what is now Salihli, Manisa. The coins contained images of different animals to denote their worth.

The earliest known surviving peace treaty just happens to be between the Hittites and the Egyptians and is referred to as the Treaty of Kadesh. Believed to have been ratified in 1258 B.C. during Ramesses II's reign, Egyptian inscriptions have survived in Luxor since antiquity and the Hittite version was uncovered in Hattusa, which is present-day Boğazkale located in the Black Sea province of Çorum, but some of the tablets from the treaty are currently on display at the Istanbul Archaeology Museum.

Born in 1136 in Upper Mesopotamia and serving as chief engineer at Artuklu Palace in Mardin under the Oghuz Turkic-origin Zengid Dynasty, Al-Jazari was a prolific engineer of automated devices. His “Book of Knowledge of Indigenous Mechanical Devices” served as a do-it-yourself (DIY) guide to 100 different mechanical devices including a robotic drink-serving waitress, musical robot band, a wide variety of ornate automated fountains, clocks and the suction cup and flushing system, inventions which paved the way for indispensable everyday items such as vacuums and flushing toilets.

Founder of modern neurosurgery was a Turk

Mahmut Gazi Yaşargil is a medical scientist and neurosurgeon whose collaboration with Raymond M.P. Donaghy at the University of Vermont resulted in the development of microneurosurgery. He also treated ailments such as epilepsy and brain tumors with instruments of his own design.

Turks were the first to take flight

Hezarfen Ahmet Çelebi is credited with being the first person to achieve sustained unpowered flight as recorded by 17th-century explorer Evliya Çelebi. This historical flight took place in 1632 as Çelebi is said to have climbed to the top of the Galata Tower and from there using the force of the wind and eagle-like wings to have taken flight over the Bosporus to land in Üsküdar and thus, cementing his legacy as the pioneer of gliding. Supposedly the sultan of that time, Murad IV, was watching the historical achievement from the Sinan Pasha mansion in Sarayburnu after which he supposedly granted Çelebi a sack of gold coins and sent him off to exile in Algeria, deeming his powers to achieve whatever he wanted to be too daunting.

Interestingly enough and also according to Evliyâ Çelebi, a year later, Hezarfen Ahmet Çelebi’s brother Lagari Hasan Çelebi supposedly embarked on the first successful rocket flight, which he did launching in a seven-winged rocket using gunpowder from Sarayburnu for none other than the occasion of the birth of Sultan Murad IV’s daughter. Unlike his brother, who did not fare as well, Lagari Hasan was said to have been gifted with silver and a high rank in the Ottoman army by the sultan for his efforts.

Of honorable note, Turkey has an important legacy with air flight as Sabiha Gökçen, an orphan adopted by the Republic’s founder Mustafa Kemal Atatürk, was also the world’s first female fighter pilot in 1937 at the age of just 23.